Syrian government forces have disrupted an ISIS offensive on the government-held Tyas Airbase in the province of Homs.

All attempts by ISIS terrorists to seize the airbase have failed, and the Syrian army, the National Defense Forces (NDF) and Hezbollah, supported by the Russian Aerospace Defense Forces have secured the perimeter of the Tyais Airbase and the nearby areas, including key defense points near the Abadoned Armored Battalion and the Air Defense Battalion.

Now, the key idea of ISIS terrorists is to continue to pressure on the supply lines of Syrian government forces along the Palmyra-Homs highway. However, the prospects of this goal now looks questionable because the Syrian military has been deploying more reinforcements to the area. 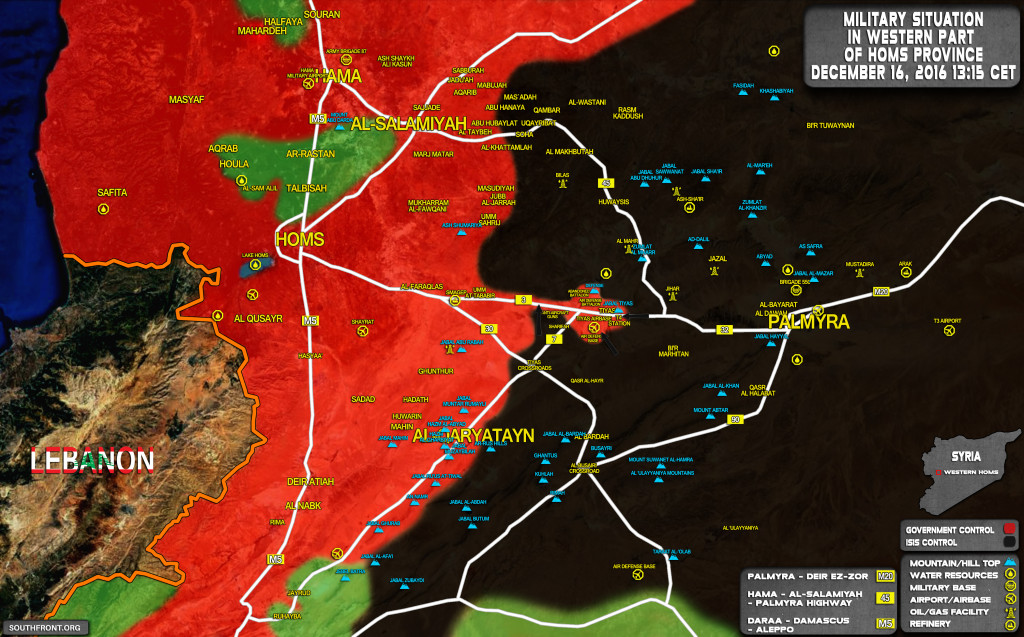 A storm of SAA troops is on the way.

And ISIS is basically way out in the open in the middle of nowhere, with no buildings or civilian shields…

Gonna be a bloodbath.

so did they expend several thousands men with tens of vehicles just to poop the party of Aleppo liberation? If that’s the case, it speaks volumes on ISIS real purpose.

They captured Palmyra, many checkpoints and defensive sites, some oil fields, have cut some important roads and are sieging one of the major airports of the syrian government.

When they started the operation the Aleppo battle was almost over so I don’t think they did it to affect that battle. They attacked when they did because Palmyra was mostly unprotected because of lack of manpower and bad intelligence/reconnaissance.

In simple terms, they attacked because they had good chances to win.

Considering their situation in Al-Bab, Mosul, Kurdish front, Palmyra was out of question. They got permission from Mosul and Al Bab while losing ground on the Kurdish front. Can you call this an opportunity?

It is not an army, there are local commanders, power brokers and local tribes. Some of them don’t give a fuck what goes on in Mosul.

You didn’t answer what I asked. They clearly didn’t attack because they had good chances to win, because they payed it manifold elsewhere. Answer that!

Why did they take man power from one front and move to another if they are not an army? Because they are ruled by what is left from Saddam Hussein army, everyone knows that. Even your Muricans admit it!

Yes. Palmyra has little purpose (militarily) other than being an outpost literally in the middle of nowhere. Generally, whenever the FSA gets in a jam, ISIS usually does some sort of stunt to draw attention of the SAA somewhere else. Usually it’s half-hearted and ends quickly however. But in this case, since they had so many guys from mosul, they went all balls in at palmyra.

bust out the thermobarics and fry up some moderate opposition