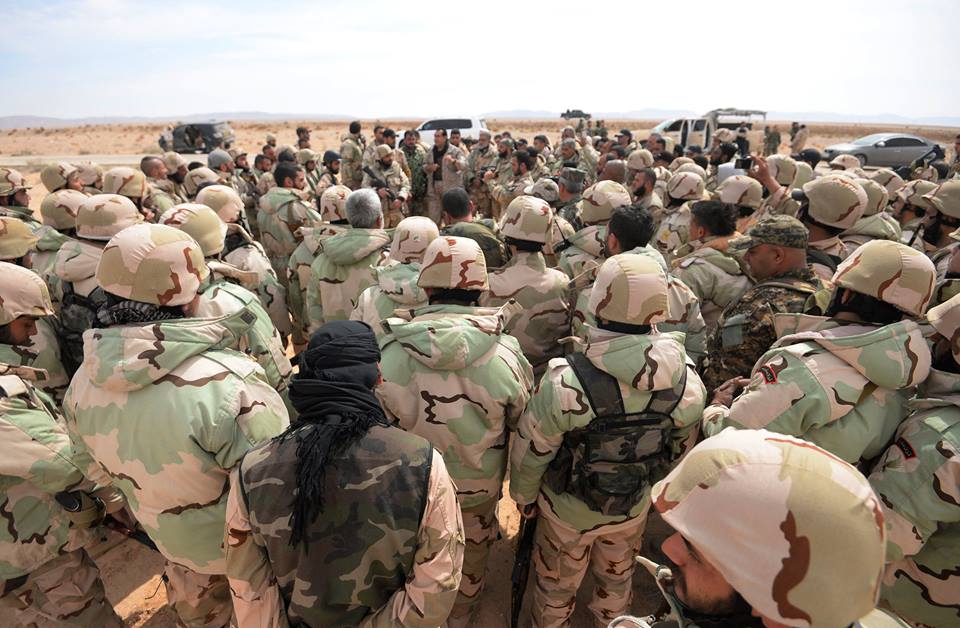 The decision followed of a series of the questionable events linked to the group. The Desert Hawks Brigade had been temporarily deployed to the eastern Hama countryside for a widely-expected operation to liberate the ISIS-held town of Uqayribat. However, the brigade withdrew from the area after few days of the fighting. According to local sources, tensions with the Syrian Arab Army (SAA) and other pro-government units were the reason behind the decision.

According to reports, members of the Desert Hawks Brigade will have an opporunity to joint the SAA 5th Assault Corps, the Qalamoun Shield Forces or other pro-government units.

Colonel Mohammad Jaber allegedly left Syria and is now in Russia where he and his brother, Aymen al-Jaber, have some property.

My understanding is that the Brigade’s interest ( which was really more of a battalion size formation, never counting 3.5k men among its ranks) was driven primarily by mercantile goal, and occasional its interest aligned with that of the government forces. They were primarily after the oil and gas fields, having been promised a big cut from the production once liberated.There are just no gas or oil fields in eastern Hama, hence their reluctance to engage in fighting. When SAA could use any ally it had to fight the war, their conduct on the field was tolerated ( if not quite endorsed). Now that SAA got back on its feed and is gaining momentum, such deviation from the larger goal of liberating Syria are not tolerated so much. Hence, the order to disband them. The history of warfare is fully of similar examples of units used in dire times, and then disbanded when no longer needed.US is also forming and disbanding un-loyal units at will in Syrian theater of operations.

Same as Turkey does in the Azaz enclave. Units like these are in fact mercenaries. They are bought and, if they do not take care, sold by their masters.

They could have been sent to T2 and helped there!!

The unit consists of cca 2-3K troops, majority ex SAA NCOs and officers. It seemed pity to concentrate it in one unit and make them fight as regular soldiers in stead of spreading them around using their military knowledge and leadership skills – something SAA lacked for most of the war. It seems to me that is exactly what the government is doing right now. A semi-private outfit and a potential political risk will be included among regular army troops. And it’s owner will be quietly retired to Russia – with sizable severance pay, no doubt. A year or two ago, western analysts were predicting that various pro-government militia leaders would stage a coup and get rid off Bashar as soon as they were sure the end of the war was near. Seems to me that the “innocent looking ophthalmologist with heavy lisp and almost no charisma” is a couple steps ahead of everyone – again…

They were reformed as a new unit and they are still dispersing them to other units already a new unit such as the Euphrates Hawks appeared. Blame their Commander Jaber for being a useless and all about his cut and not much for his troops, why he was retired to Russia. Bashar served in the military for a time and he does break bread with the troops, much more personal than many others , but a wise mind he learns quick why he was wanted at the London Eye Hospital.

For the survival of Syria it was required to rely on such formations, which are not regular army units. There are several units with many different backgrounds which got founded over time, but are not part of the regular army and command structure. In fact, they pose a direct threat to the Syrian government itself too, as interests are not aligned either.

Basically, these units are an expression of the balkanisation of Syria in itself. There are probably more formations which will be turned to regular units or being disbanded, as their role is not that important anymore.

In fact, Russian influence in the Syrian military will pose a big threat to Syrian sovereignty too, as without Russia, Syria wouldn’t exist anymore. I hope that Russia and Iran do not abuse the situation too much., but only time will tell. However, the Syrian government shouldn’t abuse their stabilized regime either.

None of the involved parties can be described as being the good guys, not even those who act according to international law.

Both HrKy75 & Jan Tjarks make much sense. Baathistas wont dare to spread those people out. If so, it would be to kill them one by one discrete.

Its the normal regime procedure during many years.

…In fact, Russian influence in the Syrian military will pose a big threat to Syrian sovereignty too

To their credit, Russia has been very clear since the start of the war that the will help Syria eliminate head-choppers today, but Syria must be able and willing to defend itself in the long run. That is repeatedly demonstrated when Israel pulls another sneak attack. Many get mad at Russia for not intervening, but it was a wise choice not to ‘be’ Syria’s army or control it and decide how to respond to external aggression.

Helping the Syrian army eliminate head-choppers is a clear mission with an end point. When the Syrian army can handle the remaining ones by itself (that time rapidly approaches), most Russian troops will leave and the remaining ones will return to the Russian bases. This prevents Syria from developing an eternal dependence on Russia for day-to-day defense and allows Russia to distance itself from would surely be future attempts by Israel or Turkey to stir up trouble, then cry about Russian troops and drag the US into the fight as well.

Good point Paveway, but I highly doubt that after the head choppers, no matter if the so called moderate ones or not, are done, that this crisis would end.

In fact, we will see the different players real intentions way clearer then. Furthermore, striking out the head choppers on the open battlefield will not destroy them, but they will turn to their usual business instead. No need to keep territory, if there are enough sleeper cells.

This crisis is far from over and many of the involved parties are more than willing to fuel the fire, as such I do not see that the Russians can withdraw so easily, even if they want to, as Syria costs Russia a lot of resources missing elsewhere.

One thing you misunderstand of the Syrian politicians they all see Bashar something his father strived to become and a True leader of Syria. Bashar he has the politicians becoming more active in their roles which has been giving many Syrians pride in this new Syria emerging from the ashes of destruction and chaos.

Well, indeed, after his older brother died in a car accident, it turns out that the appointment of Baschar Al-Assad was a lucky strike for Syria after the tragic loss for the family.

However, we will never know how his older brother would have maintained Syria’s rule, who was meant to take over from his father. Before Syria tumbled into its current crisis, Baschar Al-Assad already changed a lot of rules within Syria, quite to the positive.

However, Syria will never be the same again and I hope that Syria after this crisis will push forward to regain and surpass its former power. Like in any other war, none of the people deserved this fate and we can only hope that they are able to turn this mad war into something positive in the long term. Hopefully Baschar Al-Assads government knows what to do then, but we will see if this will be the case.

first the SAA should reform itself. how is it possible, that the local colonels tell, whre go their units to fight?

Solomon, for the mere survival, those colonels where crucial for the time being. But they always posed a threat to the Syrian government too, with the possibility of toppling it over. There are several reasons why the main forces of the Syrian government never really left Damascus and were held back, until recently, as it seems to me that they were finally taking part in the fights within Damascus, Joba district.

However, the time is over for these colonels.The first sign in this regard already was raising the rank of Baschar Al-Assads brother, making him the highest commanding general. This was the final pivoting point and a clear sign of the Syrian government being clearly secured, not having to rely on troops they can’t fully control anymore. They helped the governments cause, but now its time to step aside for them.

the general was serious alternative to assad. must go.

How so? DH was a failure in military terms.

sure not. in critical time there were the only one serious force. without them assad would lost everything.

i meant, the general is popular. if he will be candidate in next presidential election, can win. or the chief of DEZ troops, or tiger forces. therefore was dangereus for assad.

SAA has a great momentum as an army of national unity and doesn’t brook separate/unclear command structures any longer. This is a good development really, despite a slight sadness to see Desert Hawks disband – they were a good unit in many engagements. But this is about the creation of new Syrian identity, which is what has saved Syria as a nation. No unit is more important than that.

Sad :((( but for better or worse, I’m hoping this is for the better. I just hope the remaining units will go where they are needed and will continue to be useful in achieving complete victory for SAA :))