Syria’s authorities are satisfied with the situation in the Idlib governorate, Syrian Foreign Minister Walid Muallem said on Friday.

“Yes, we are satisfied with the situation,” he said. “Humanitarian corridors are functioning, but, regrettably, terrorists do not give civilians a possibility to leave Idlib.”

“Terrorists must leave Idlib, the governorate should not be in the hands of foreigners,” he stressed. “I don’t know whether terrorists are already leaving it. I hope the process have started.”

Idlib is the only large region in Syria that is still controlled by illegal armed groups. In 2017, a northern de-escalation zone was established in Idlib to give shelter to militants and their families who are reluctant to voluntarily surrender arms.

According to United Nations Secretary General’s Special Envoy for Syria Staffan de Mistura, about 10,000 Jabhat al-Nusra and al-Qaeda militants are currently staying in the region. When Damascus finally regains control of the governorate, it will put an end to the large-scale armed confrontation in Syria.

Terrorists must leave Idlib and go US for whom they work. Syria is not feasible for them.

They could probably gets jobs as cops in the US.

I think a better place for these terrorists is hell because in America here are native Americans. I don’t want that they suffer.

yes i want all those bums outta there!!!

NeoLeo, did you just delete this clown? LOL

He’ll be back tomorrow with another account… I hope some russian missile will delete him permanently soon.

Why waste a missile on this peanut? Shoot him with a frozen pork bullet . . .

Outta there and straight to hell where rent-a-terrorists and mickey mouse jihadists belong.

Turkish President Recep Tayyip Erdogan has ended a visit to Germany by opening one of Europe’s largest mosques. 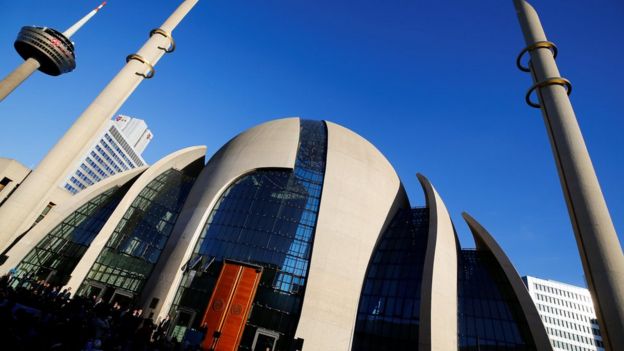 Always upvoting your own comments, troll?

I absolutely agree with your post: “Syria is much safer without them! The world is too!”
Thanks for posting it!

Idlib is not Syria, so be happy without #Idlib and don’t attack us.

Who are considered “terrorists” in this case? Is it anyone connected to al-Qaeda or anyone who opposes Assad’s power? Also, you’re dangling a possible Idlib offensive again, but given the particulars of the situation I would argue that a Turkish invasion against HTS is much more likely.
http://soturian.blogspot.com/2018/09/will-turkey-invade-idlib.html

Turks need to clear the buffer zone, that would be a nice start.
HTS et al will lose their built up defensive lines. :)

A terrorists is anyone (foreign or local, ISIS, Daesh, ALQaeda) who under the excuse of being against Assad have committed any crime to Syria civil population or have helped USA-Israel-NATO to destroy Syria country. In Syria there is not any civil war, this is a war designed by Israel-USA-NATO to destroy Syria.

Thank you for proving my point Herr Sycophant, now mute.

Ok how about the guys who did 911, would you consider them terrorists or freedom fighters?
Also by what criteria did you make that judgement?

These are the countries where terrorists can go according to their supporters: USA, Israel, Turkey, or Europe, and maybe from there they will be relocated at Afganistan.