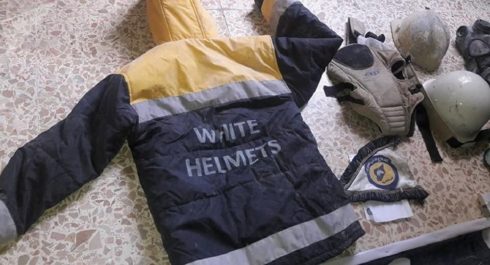 The Syrian Foreign Ministry has condemned the evacuation of the White Helmets personnel from southwestern Syria describing it as a “criminal operation” by “Israel and its tools,” the country’s state-run news agency SANA reported on July 23.

According to the ministry, the support of the evacuation by the US, the UK, Jordan, Germany and Canada shows that these countries “back terrorists in Syria.”

On July 22, Israel revealed that it had evacuated members of the White Helmets from the southern Syrian provinces, which then were partly in hands of the militants, to Jordan. About 800 persons were evacuated according to existing reports.

The US-Israeli-led block describes the White Helmets as a NGO that works to save lifes of Syrians ingoring all links of the group to the terrorists (particularly the former branch of al-Qaeda in Syria – Hayat Tahrir al-Sham).

We do live in strange times. There are two parallel worlds coexisting, actual reality and Karl Rove’s imaginary ‘reality’. So with the White Helmets. ‘A brave, fearless bunch of humanitarians risking their own lives to save children from the brutal regime of butcher Assad’ runs one ‘reality’. ‘A mercenary group of callous cynical operatives of the Israelo-western terrorist forces, fabricating false pretexts used to justify illegal attacks on the sovereign state of Syria by evil people who wish nothing but harm’ runs the other. And ne’er the twain shall meet.

Most people here will understand which of those is the real reality, unfortunately most people in our countries are trapped in the falsity of the other.

Well, if you had read the blog of Scott Adams, creator the Dilbert comic and self professed hypnotist and persuader, who was one of the first to predict Trump’s victory when everyone was still calling him a joke, you had learned that there is no reality. What we perceive as reality is basically a movie that our brains create, often on how we want to see the world. So in his blog he often mentions there’s the movie where as a Trump voter you see Trump as doing well as a president and the media spewing fake news vs. a reality where you see Trump as Hitler reincarnated and the end of times is nigh and America will be taken to the sexist racist times of the 1950’s and even earlier.

Although personally I wouldn’t mind a return to the 1950’s, because rock ‘n’ roll is awesome and way superior to the pop drivel that gets spewed all over us day after day.

Ok, I was’t looking to discuss the metaphysics of reality, (this probably isn’t the right place for that), more I was commenting on the divide that has opened up between facts on the ground and the artificial construct of the propagandists. I remember recently seeing May robustly promoting the White Helmets bullshit in front of a House of Commons braying its support, and traducing the ‘smear campaign’ being ‘conducted against them’. Presumably a swipe at that courageous rarity, a journalist with integrity, Vanessa Beeley, who has done more than most to show up the fakery. It is not as though the propaganda view is a few degrees off, it is 180˚ off, it is the reversal of truth (here you can get back into metaphysics to consider the satanic philosophy of inversion)

Trying to hold a conversation with someone who is trapped in the false construct is completely impossible now I find. There must be a special place in hell for Edward Bernays.

I’d say that there are more than just two “realities”. It’s more like a kaleidoscope than the duality of a photograph and a “negative”. Ask the average American on the street and they couldn’t find Syria on a map. Just go to a Western “news site” like Yahoo or Daily Mail. Stories about Syria get a few dozen comments at best. Most of them are from non-Westerners. Westerner’s comments are typically shallow “kill ’em all” type of drivel.

Quick summary of other things.

Yes, these de facto terrorists know too much :)

It will be fascinating to see how Canada, Germany and UK assimilate these people into their societies :) The faux 1st Responder jihadi’s will have to be paid for life ,along with their families, to keep their dirty secrets :)

There are far to many of them to be exterminated quietly in ‘accidents’.

Yes they will meet their demise soon. Good riddance.

Nothing quiet about my crusher bud lol

Personally, whilst we can all hope, I reckon they will be shipped elsewhere – anywhere where the Yanks are causing war.

Ukraine, Middle East, for those 7 nations/5 years invasions, plus Afghanistan, not forgetting the nations that border the Caspian Sea. Wonder how many are ‘Rothschild Special Forces’, so will be kept safe, wherever they end up?

If it were a true independent NGO the white helmets would have operated in both Jihadi AND government controlled territory. The fact that they didn’t showed that they are not an NGO but just a supposedly unarmed group opposed to Assad. Because real NGO’s try to work very hard at not taking sides, so as to not be impeded by the side they are not picking.

Just to add insult to injury – “Yesterday we learned Israeli evacuation of Syrian White Helmets was not coordinated with Russia. US CENTCOM’s Gen Votel says he’s not briefed on Trump-Putin Helsinki chat re: cooperating on Syrian refugees; reluctant to move on it.”

This is from Syrialivemap.com : I have mentioned before that it could be Anti-Assad. Just passing it on.

RT made an article saying that the evacuation was negotiated (not coordinated) with Russia and Syria.

Basically Israel asked permission to do it.

Holland Described the White Helmets Rescue as a Great Act of Civilised Behaviour… the White Helmets who have dine so many Good Things for Humanity by saving Hundreds of Thousands of Syrians from the Evil Mr. Assad… Were Saved by IsraHell and ofcourse the U.S., Canada, the United Kingdom, France, Germany….Thanks to these Countries these 800 Headchopper’s Red-Cross Saviours of the World and Nominees for the Nobel Peace Prize will find a Happy Home and Warm Welcome in One of the European or American Countries… Long Live the Brave Heroes of the White Helmets…

Will we see the White Helmets on the streets of London, Toronto and Berlin soon , giving faux 1st Aid to victims of false flag chemical attacks :)

You mean Neo Bolshevik supporters. Not ‘ZioNazi’. That is a jew term, meant to smear the NSDAP, who fought against the very filth supporting these white helmet head chopping cannibals. Neo Bolsheviks, my dear. Neo Bolsheviks.

I see them as all one Big Plan: First take over the Americas (still a Colony/ Corporate of Britain)… when they had seized the Americas… Germany became to Powerfull in the Beginning of the Twentieth Century… England and France Created WWI…to take over and they installed the Weimar Republic..and Create an Atheist Communist State in Russia… they Killed the Czar…Raped & Massmurdered Christians & Intelligentia in the Gulags…”Jews” Controled 85% of Government & Business… During Weimar & Communism…Hitler was Financed by the Warburgs…and thus a Puppet…To get Rid of Germans for Good…they have Created all those different Groups for us…Communists, Socialists, Neocons, Democrats, Republicans, Liberals, Wahhabis, ISIS and perhaps also Nazism.. they use them in the Ukraine right now…. whatever it’s all the same Folks… the Elite needs Division… to Create Wars, Steal Land & Resources… Decimate Populations…

It is Not only the Neo-Bolsheviks or Zionazis…Ever heard of the Merovingians? Read this Link and you will recognise many of the Structure & things of today… they had Free Men of Art..Servants, Elites…the Merovingians is also a Famous Bloodline with Bush & Clinton in it https://www.realmofhistory.com/2016/10/18/10-facts-ancient-celts-warriors/

YES, I am very awate of the Mwrevignons, D’Medicis, Gurplhs, Lambarts, Kuhns, Loebs, et al. These were part of the jewish supremacist plan for Wotld Domination. Hpwever, the hype on The NSDAP being funded by them was pure bunk. The NSDAP fought against the banksters. And a secind thing you should know. The man who proffered and propagandized the smear term ‘Nazi’. A German jew named Konrad Heiden. Search it here http://www.justice4germans.wordpress.com. Don’t allow yourself to be mislead by the tricksters.

zionazi isn’t a jew term, “neo-bolsheviks” is a jew term.

i dream they debark them on the beaches of ibiza, or cote d’azur and let they camp there so that “liberal-democratic, civilized western voters” can see by themselves who are really their heroes of peace.

All criminals stick together, especially zionists ones ,like these Oscar winning chemical agents of death,operating on behalf of the racist,genocidal regime of war criminals, in Hell Aviv.

The White Helmets only operated in militant occupied territory, most Syrians have never heard of them, and now they are being evacuated by the leading foriegn anti-Syrian counties – seriously, this is not how authentic civil emergency services operate in any country. The hardcore members will likely be recycled as assets for more illicit NATO state sponsored terror and rest packed off to western welfare states to be issued with a state funded house and welfare income to shut them up.

This is what tolerating Zionism means to the world,,,agreeing to be led by a gang of luciferian bankster,warmongering,thieving,murdering,terrorist supporting scumbag criminals.

Sure it would have been great to capture them but I’m sure there are many that didn’t get away. The good side is these rabies infested vermin are being absorbed into Israel’s puppet states. This can’t work out well for them. Notice how Israel is too smart to let their infected creations stay there, but that’s OK we would love to have them live among our women and children.

so any raghead putting up a white hat could have become a legal evacuee?

The west and israel can labor all they want to extricate a few hundreds of goat lickers from Syria, and then nurture and care for them on their own territories, but the truth is, they aren’t going to be of any importance in the mercenary wars against the debt free world they have planned in all these years.

President Trump is now threatening to take America into a war against Syria, Iran and even Russia, a war he says is justified by “evidence” he has received from the Syrian White Helmets. We will prove beyond any doubt that this is a “Deep State” organization, a melding of CIA, al Qaeda and Britain’s intelligence services. We now have “slam dunk” proof that Trump and the “fake news” MSM are and always have been in lockstep, playing us all. Actor George Clooney knew that the organization Swedish Doctors for Human Rights had cited the “White Helmets” as child killers when he produced the Oscar winning propaganda video that may well have led to this latest outrage. The organization, SWEDHR is very real, their work authoritative and their indictment of the White Helmets for killing children in order to stage propaganda videos would have been known to Clooney and Netflix. They went ahead anyway.

Who funds the White Helmets? Who are so desperate to get their Special Mercenaries home, with nobody noticing?