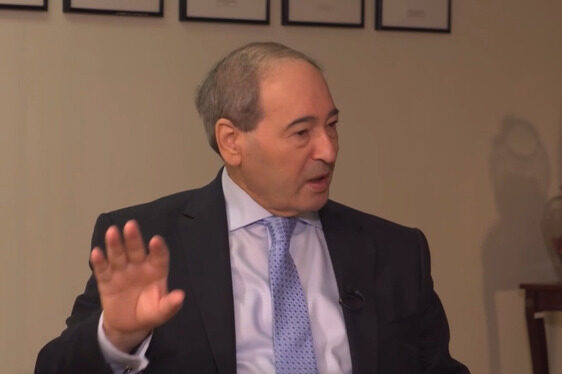 Syrian Foreign Minister Faisal Mekdad during the interview on RT.

Israel will be made to pay for its recent attacks on Syria, the country’s Foreign Minister Faisal Mekdad threatened during an interview with RT that was aired on September 24.

Mekdad said that Syria will not forget those who were killed in Israel’s recent attacks or the destruction these attacks inflicted on the international airports of Damascus and Aleppo. The minister went on to vow that Syria will respond to the attacks, without elaborating.

“We will respond, but there is no need to say how and in what way we will respond, and Israel will discover at one time or another that the price of its attacks will be too high,” Mekdad said.

Israel launched two attacks on Aleppo airport and two others on the airport of Damascus over the past month. The attacks claimed the lives of five Syrian service members and wounded at least five others. Most of the casualties were air defense operators.

The recent Israeli attacks were reportedly meant to disturb Iranian weapons shipments to Hezbollah in Lebanon. Tel Aviv claimed earlier this year that the Islamic Revolutionary Guard Corps was smuggling weapons to the group via Syrian airports. Iranian airliners were allegedly being used for this purpose.

A recent report by the New York Times said that the alliance, known as the “Axis of Resistance,” have agreed to respond to Israel’s repeated attacks by striking US bases in Syria.

A US in the northeastern Syrian governorate of Deir Ezzor was targeted with rockets just a day after the last Israeli attack on Syria, which was on September 17. The attack was attributed to Iranian-backed forces. No casualties or losses were reported.

Mekdad threats indicate that Axis of Resistance may be planning for a more serious response, one which could finally deter Israel and end its attacks on Syria.

I find myself wondering just how long the Russian admin are going to wait before realising that the isreali apartheid regime doesn’t give a shit. They must remember the Russian ‘revolution’ right? Paid for by jewish american money and run by a jewish tailor from the Bronx. I’m not fussed either way but the facts are the facts.

Syrian politicians promising retaliation on the Israelis can kiss my ass. Libya, Egypt, Syria, Iraq, Kuwait all have reasons to hate Israel, so I’ve been hearing Arab pols making empty threats like this spud forever. To date, not a single act of retaliation after multiple Arab nations being bombed by Israel over the span of decades. What is it about Arabs that can’t allow them to focus long enough to understand that westerners think empty threats say more about the person making them, than about the apparent cause of their outrage?

Arabs / Middle Easterners or whatever they’re called are a deficient, defunct and morally poor race of people. Imagine siding with other races to comply in the destruction of your region / people. Imagine the white race inviting Arab armies in to fight with other white countries. This is exactly what they ALL do whether the refer to themselves as Syrians, Turks, Egyptians, Paki, Bangladeshi or Saudi etc. What a bunch of morons.

Whites are mutants with Neanderthal genetics

All talk no action

Like fuck it will… Syria and its decrepit military are cowards and will never DARE to attack Israel or its airports or its military in the occupied Golan. In fact, all they will do is take more and more hits from the vastly superior Yids’ military and neither Iran nor Russia will lift a finger to help the Syrians. Syrians are cowards and when you think about it, one strike at Ben Gurion is all it will take to make the Yids think about ever attacking Syria again and yet, Syria is too scared to do this. It would cause the Yids to lose billions of dollars in just a few days! Hoping that a few brave ‘rogue’ Syrians will have the guts to fire a couple of its Russian or Iranian missiles at Israhell and sort the filthy Yid c*nts out.

Heard the same repetitious response from Syria far too often to believe that Syria will actually ever act. All talk and no walk.

Your threats are like a baby’s diaper. Full of shyt.

You haven’t done a damn thing all these years while Israel bombs you with impunity.

Go hide under your bed.

Until you understand a history of Khazaria Empire, you never understand crimes of these Fake Semites

The so called ‘Jewish Question’ is not Complicated. Jews simply need to be exterminated.

Don’t talk shite! There’s sweet FA you can do and you effing cowards will just take everything the Y!ds throw at you because you’re just like pussy b!tches… So don’t give us that bullshit that Syria will exact revenge… Like f*ck they will!!!