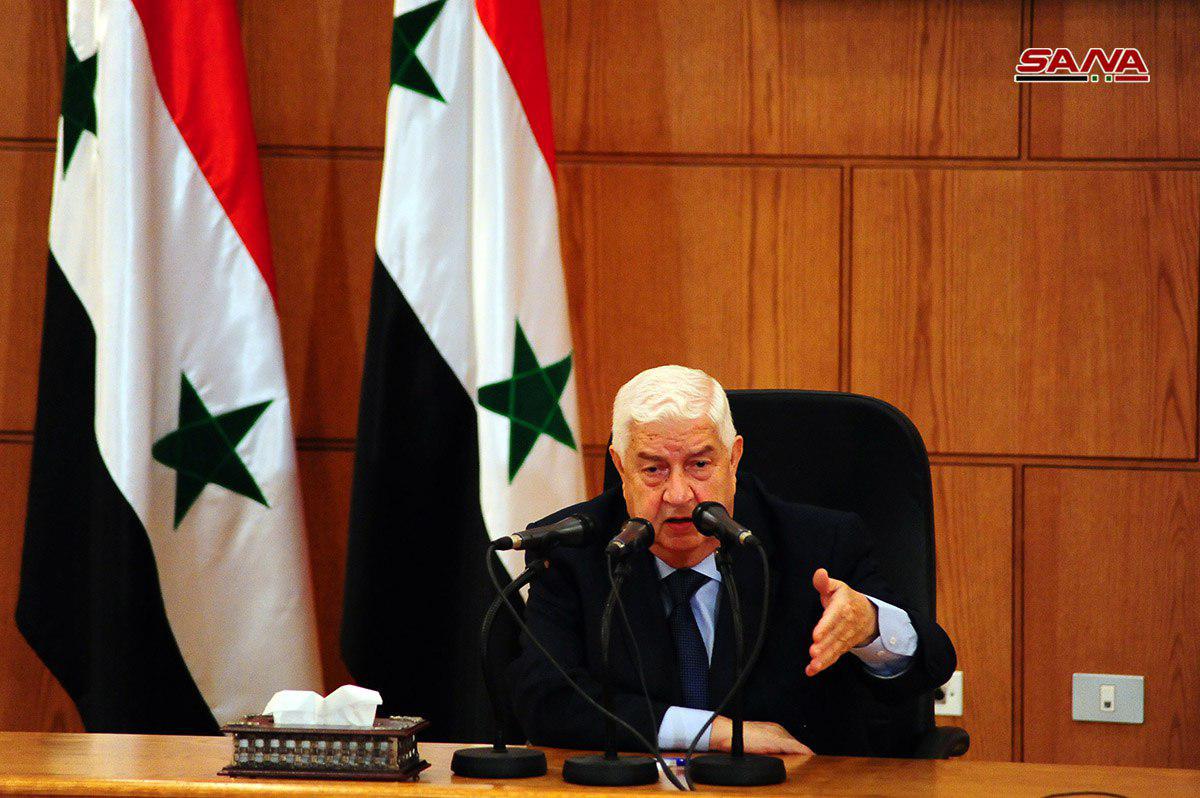 On June 2, Syria’s Foreign Minister Walid Muallem said during a press briefing in the Syrian capital of Damascus that Syria will not approve any agreement on southern Syria until US forces withdraw from the al-Tanaf base near the Syrian-Iraqi border.

“Do not believe any statements on an agreement about the south of Syria unless the US forces withdraw from al-Tanf area,” Muallem said answering a question regarding the supposed agreement in southern Syria, according to the Syrian Arab News Agency (SANA).

Muallem also said that there are only Iranian military advisers in Syria who are assisting the Syrian Army (SAA) upon an official request from the Damascus government. However, the Syrian minister denied the presence of any “Iranian bases” or “Iranian forces” in Syria, and accused Israel of spreading such propaganda.

“Since the beginning of the crisis, Iran has supported Syria in the war against terrorism backed and financed regionally and internationally… no Iranian military presence on the Syrian territories rather there are advisers who work by the side of the Syrian Arab Army, ”said Al-Muallem.

A day earlier, Russia’s Ambassador to the UN, Vasily Nebenzya confirmed that an agreement, under which Iranian forces and Lebanese Hezbollah will withdraw from southern Syria, had been reached, but declined to reveal if the agreement is being implemented now.

Deputy foreign ministers of Russia, Jordan and the US are set to meet in the Jordanian capital of Amman next week to discuss the situation in southern Syria. Local observers believe that the meeting will be vital for the future of Syria.

YES US WITHDRAW your UNWANTED SELF from SYRIA NOW

6. In November, 2018 the Palestinian hostages rescue operation will begin in Palestine.

At the moment all these areas are in the control of Western foreign terrorists.

I am Nobody compared to this very wise and Smart person Walid Muallem. But May I kindly please beg the Iranians to cool off, for now.

This war can only be won with diplomacy and peace.

The alternative at the moment, is not attractive. Right now, diplomacy benefits only us.

Right it is best if US can accept that . They already said they would stay forever.

Tell me, if it is your country, what would you do? Give flowers to them to say … please leave or I tell my father?

There are indications the various parties, albeit with some grumbling, are coming to your conclusion that diplomacy is the way out of the mess. Right now all is still fragile but hope is rising and just keep that momentum going, it makes a difference.

For 7 years the Al-Tanf highway was open for ISIS between Syria and Iraq but as Syrian army reached to liberate Al-Tanf highway so then immediately America together with ISIS have closed that for Syrian nation. That is why I say American regime is wicked. The American-led intervention in Syria for sending arms to the Syrian terrorists to fuel Syrian war is a heinous crime committed by US, UK, France and SA.

You cant be serious. Muslims seem pretty bent on attacking each other. A lot. Like any other diverse group of people.

Not all, only those that sold to US and to their allies.

Islams enemy #1 are Muslims. Enemy #2 is inequality.Enemy # 3 is culture.

No agreement to make. USA has no right to stay in Syria.

Just send some Kalibrs missiles and level US bases. Plain and simple. USA has no right to be there.

as are muslim fanatics, and christian soldiers…

Now now the US has to “choose” to leave. If they try to demand and force them out theyll just dig in harder and probably blow some stuff up.

Turkey tried to demand the us leave manjib and theyre still there. What they need is a fence around that area and some soldiers to stare at each other itll make the us uncomfortable and lead trump to see the us as being on the wrong side of a wall. Just drop the pretentious arab arrogance for a bit and itll work.

Good americans in new York as well. Although removing the satanic parasite off of New York would be good. Just needs a smaller burn area.

Yeah lots of good people in Hiroshima, but the US needed to test its new weapon? All debts become due eventually.

Two wrongs dont make a right. The negative feedback loops of revenge have to stop somewhere.

Or some other part of the world will get flattened again. The United states as long as they are united can swing any world war in eurasia to its side.

Countries don’t do revenge, wars are about business, and the US uses war to take money from other countries. The corporate headquarters of USA Pty Ltd is located in New York. So if other countries/corporations want to grow, they have to take out the competition, one way or another. The cheapest way to turn the USa into something like India, a customer, not a competitor, is to nuke New York. However, the US might nuke the nuker, so first they will bankrupt the USA, then sanction it, eventually the US will no longer have the intellectual ability to build WMD’s.

So New York will probably not get nuked, as long as the US doesn’t start the war. However nuking New York would be much quicker, cleaner and result in less casualties than doing to the US, what the US has done to Latin America.

trust the syrians…..do not trust russia,us,turks,kurds and do I have to mention satanic jew israel,…

Clearly there is some sort of disagreement within the Assad coalition. . Also, he says they will not approve anything until the US withdraws when he means they will not approve anything unless the US agrees to withdraw. A common diplomatic exaggeration. . Also the US wants to ensure that the war doesn’t spill over into Iraq again and has a beef with Moscow/Damascus. The SAA wants to clear Rebels near the border but what do they plan on giving us that would convince us to leave.

There have been growing indications of a rift among all the different players on all sides of the conflict – consider the confusing statements coming from Turkey and the US over Manbij not to mention internal rifts in USA (policy like a windmill) and Russia (tension over competing interests with Israel versus Syria for example).

Yes, the statement was exaggeration. I think what he meant is Syria wants not only US agreement but for Syria to implement agreement, US must show tangible steps in implementation as well given the low level of trust (deservedly so) of the US. Talk is cheap so concrete actions will be tied to any progress regarding agreements between parties which makes sense.

In a couple of earlier comments I spoke of joint resource exploitation agreements as possible developments between opposing factions to break negotiation deadlocks. The announcement of oil sharing agreement between YPG and Syria (US) in eastern Syria is a development to watch. Smaug, do you think this,development is related to US wanting stable border so war does not spill over to Iraq?

NO, it seems Bibi promised he could get rid of the sepos(yanks), but it was BS. The US should get out of Iraq, they are like a disease, nobody likes them.

Russia must also force illegal USA forces to leave Syria not only Syrian allies. Iran and Syria are also feel threaten by USA bases in Israel and Jordan which is their neighboring countries. This reasoning of Russia is avoiding ww3 is plain rubbish. It only strengthen USA arrogance as most physical and physiological feared military force in the whole world . If short tokolosy Put in can stick to its guns and stand up for weak allies then Trump and racist world army will will back down.

Israel and its vassals are in a state of panic now that their Al Qaeda proxies have been defeated. Until all foreign mercenaries are defeated and eliminated and occupied territories liberated, then Syria can deal with the foreign invaders.

Very good point. If IDF is shitting their pants if Iranians are closer than 60km away than they should deal with their vassal forces (US) to withdraw from Al Tanf.

Zionists have nukes. They are shitting nothing…

“The Gun and the Olive Branch (2003)” : “We possess several hundred atomic warheads and rockets and can launch them at targets in all directions, perhaps even at Rome. Most European capitals are targets for our air force. Let me quote General Moshe Dayan: ‘Israel must be like a mad dog, too dangerous to bother.’ I consider it all hopeless at this point. We shall have to try to prevent things from coming to that, if at all possible. Our armed forces, however, are ot the thirtieth strongest in the world, but rather the second or third. We have the capability to take the world down with us. And I can assure you that that will happen before Israel goes under”

Those who think that Israel is a sovereign country, are living in illusionary world. Israel is doomed by its own masters and is actively participating leading itself (and its people) to the slaughter.

And there is no sovereign nation possible within the fiat money scam. And that is endgame globalism.

“Until the control of the issue of currency and credit is restored to government and recognized as its most conspicuous and sacred responsibility, all talks of the sovereignty of Parliament and of democracy is idle and futile… Once a nation parts with the control of its credit, it matters not who makes the laws….Usury once in control will wreck the nation.”

And there is also no possibility of sovereignty in a world built around inequality, greed and envy.

“The abuse of buying and selling votes crept in and money began to play an important part in determining elections. Later on, this process of corruption spread to the law courts. And then to the army, and finally the Republic was subjected to the rule of emperors”:

Plutarch – Historian of the Roman Republic

Yes they have nukes, they got the bomb grade Uranium from the USA, cause they don’t have the smarts to enrich their own.

“they” are just as smart, and as dumb, as every other group of humans drive by greed and envy.

And you do know that it was Nazis we used to create our nuclear program right ?

No it was Jewish Germans that showed the USA how to make nukes.

The Nazi scientists came to the US after the war, as prisoners(operation paperclip), they showed the US how to build modern aircraft and missiles. The US would never have got to the moon without German scientists, even the B2 bomber is a copy of a German plane, called the Horten229

“No it was Jewish Germans ”

get the fuck out you Yankee terrorists…