The Syrian Army and local militias lured terrorists into a trap where they destroyed all of jihadists. 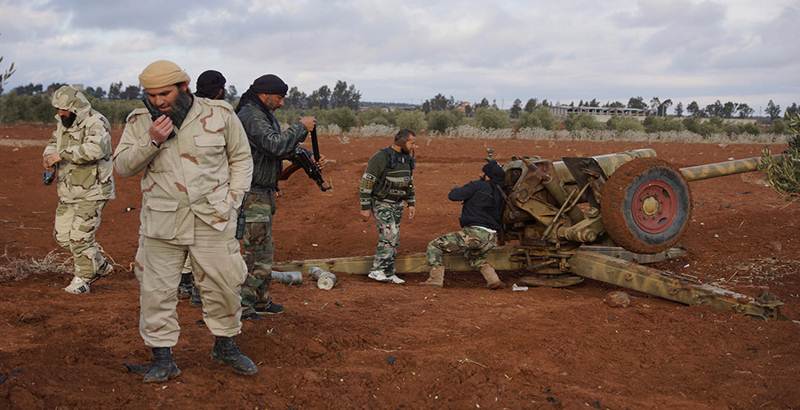 RT Arabic reported that the Syrian armed forces and volunteer with help of the Russian air power have pushed back a terrorist assault in the northern Hama province, a day after Al-Nusra-aligned groups announced a full-scale operation to regain controlled of lost areas.

On Monday, terrorist offensive was started to storm the Hama governorate’s northern countryside via the town of Morek located in the Suran sub district.

According to an RT Arabic correspondent the terrorists used “gas canisters” to try and penetrate the army’s defenses.

“But we managed to lure them into a trap where we destroyed all the fighters,” the commander said. The army also destroyed three cars and a bulldozer used by the extremists.

The Syrian government forces and local militias have crushed an Al-Nusra and its affiliates’ offensive after a fierce battle. Affiliates include the Syrian rebel groups known as Tajammu al-Izzah and Jaish al-Fatah, whose aim was to seize the northern and western suburbs of Hama and secure the groups’ grip of Idlib governorate.

Syria’s local news agency SANA reported that the successful operation resulted in the destruction of Al Nusra leadership headquarters in Morek and two other command posts in the region by killing at least 37 terrorist.

“By implementing a plan developed with the support and operation of the Russian and Syrian aircraft, we managed to surround the armed terrorist groups and destroy dozens of militants, including 15 vehicles with heavy DShK machine guns, five armored vehicles and two armored cars laden with bombs,” another Syrian army commander told to RT.

The army and the volunteer units continued their counter-offense in the region after the crushing the Al-Nusra assault.

During the army operations in the countryside of Idlib and Hama provinces more than ten positions and a number of vehicles and rocket launching pads belonging to Jaish al-Fatah terrorists were destroyed. SANA reported that the pro-government forces conducted ‘intensive operations’ which killed over 30 al-Nusra terrorists and a number of Fursan al-Haq terrorist fighters.

Blessing to all SAA fighters …