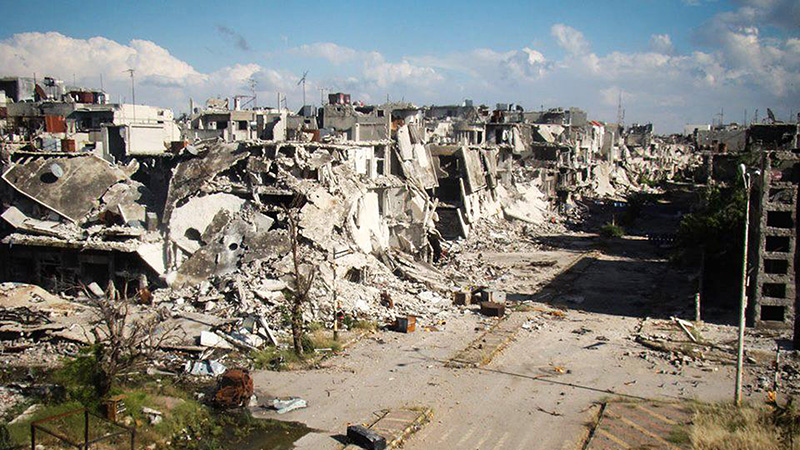 How is the war in Syria similar to war in Donbass?

BBC News referred to Syrian Observatory for Human Rights and noted, that as a result of ceasefire, concluded between the representatives of opposition and Damascus, Syrian rebels are leaving Homs. City is known in Syria as “capital of revolution”, as it was there that first serious anti-government riots took place in 2011.

Governor of Homs Talal al-Barazi told the press agency SANA that armed militants started leaving Homs already on 9th of December as it was agreed.

– First bus already left the area (al-Waer, last holdout in Homs). It was agreed that 14 buses with militants and their families will leave it,- he noted.

The deal stipulates that rebels, some of which have ties to “Jabhat al-Nusra” (Syrian branch of “al-Qaeda”), will leave their positions in several stages over the course of next two months, and will also hand over some heavy weaponry to government forces. However attention must be payed to some details.

First, northern suburbs of Homs will remain under rebel control.

Second, number of insurgents that left al-Waer varies in the media: some sources report two thousand rebels (and their families), others – about eight thousand rebels.

Third, despite the fact that some orientalists called the liberation of Homs “important event”, and undeniable “success of Syrian army”, there are some important discrepancies. Besides the information that insurgents from Homs will be taken to the area of Idlib province, held by Free Syrian Army, some other information were published. In particular, some media noted that rebels from al-Waer area agreed to leave their positions not just anywhere, but to “Rastan pocket”, together with their weapons. That is the same rebel enclave north of Homs, that overlooks the strategic road between Homs and Hama, and that Syrian army unsuccessfully tried to cut many times before.

Senior analyst at the Center for Crisis society studies, expert of Russian International Affairs Council and Institute for Middle East Sergey Balmasov notes:“ Homs was indeed the first settlement, where during the May 2011 anti-government protests erupted, where armed militants appeared and shots were fired.

– Media reports that Homs was under rebel control for four years, but it’s worth noting that over the course of Syrian war insurgents repeatedly left the town, then reappeared there thanks to extensive network of underground tunnels. So this is not the first time that rebels left Homs.

It’s worth noting that rebels are not simply leaving al-Waer, but are also taking with them small arms. It seems that they have to give up some heavy weaponry, but I suspect that they will, as always, leave already broken or scrapped equipment. Besides, northern suburbs, as it appears, will remain under rebel control, so they can return again at any given moment… That isn’t “honorable surrender”. And it is clear that liberation of the city cannot be considered a serious success.

On the side of the rebels there are rumors that they were well paid to withdraw from Homs, allegedly with Iranian money. In part it is justified due to the fact that majority of rebels were members of Free Syrian army (FSA), and the smaller part were fighters of Jabhat al-Nusra. But really no one but militants themselves knows what are the real proportions.

– Judging by the media reports, it is not entirely clear where are they taking the Islamists: either to Idlib, or they allowed them to go to “Rastan pocket”.

– Perhaps there are no contradictions at all. In the district of al-Waer there were different groups. FSA – that is “blanket term”, which hides more than a dozen of different organizations. It is entirely possible that FSA militants will drive off in one direction, while “Jabhat al-Nusra” the other.

Regarding the influx of insurgents to “Rastan pocket”. We remember how Aleppo was seized – with a surprise attack. Many were surprised when large group of fighters appeared there and captured parts of the city. Maybe for some people it will be new information, but for that Syrian special service received very large amount of money from the Syrian opposition. Truth is, the deal was to let in only 600 fighters, but instead 600 there were six thousand… And who can ensure that after some time passes Islamists won’t return to Homs again.

-There is an opinion that FSA, beloved by USA- is nothing but a legend to cover up contacts of western intelligence agencies with radical Islamist groups…

– Of course. When Free Syrian army received weapons in November, including the anti-tank systems BGM-71 TOW, they, so to say, brotherly shared them with “al-Nusra”. Or another example: when “Jabhat al-Nusra” massacred population in one of Druze villages in June 2015, Israelis warned them pretty seriously. After that “al-Nusra” apologized to Druzes and didn’t commit obvious acts of genocide. So there are channels of communication- there is no doubt to that.

– Numbers of Islamists that will withdraw from Homs area range from two to eight thousand men, in media reports.

– No one really knows that, except fighters themselves. If you remember the history of our (Russian) civil war, when Makhnos rebel army held certain regions they could dramatically increase and multiply their numbers. It’s same here. Now insurgents are leaving Homs together with their families. But who can guarantee that their wives and children didn’t take part in fighting? Just throw your rifle- and you are not a militant anymore, but peaceful civilian.

– Some media are reporting about withdrawal of jihadists from Homs with pretense that “Islamists are leaving the city with protection from UN representatives”.

– We can of course point to UN representatives, who did their dirty deeds- it is well known how they fled from fighters at Golan heights, how they handed them weapons and so on. But situation with food supply to the settlements has been unstable for years. In fact population of some areas have been starving. Temporary withdrawal of insurgents allows for food to be supplied. But if the government forces were unable to provide food to the populace, if they weren’t able to clean up area from Islamists, is that too the fault of UN.

– If we take into account millions of refugees from Syria, in those regions where insurgents still remain, what percentage does peaceful population represent?

– In every war against rebels, there are those who willingly collaborate with fighters, and those who have no other options, except death. Change of spirits during the civil war is a common phenomenon, but significant part of Sunnis is forced to assist those who occupy settlements. It is clear that in Syria there is practically no serious targets for guided bombs and precision guided-weaponry. And in populated areas fighters are mixing with local population…

As part of the political talks about Syria in Vienna there is continuing work to consolidate list of terrorist organizations, and list of those who will become part of opposition delegation. Reminds us member of expert council of Military-industrial commission of Russian government, chief editor of “Arsenal of the Fatherland” reserve colonel Victor Murakhovski.

– I think that the process of withdrawal of fighters from al-Waer area in Homs province is related to this, although similar project by UN existed for a long time.

When it comes to the supply of “Rastan pocket”, there is still no continuous front line. That is, when positions of insurgents are marked on the map of the pocket with green or yellow color, that doesn’t mean that front line is continuous, or that everything is under control.

Usually there are key points under control, which allows for ammo supplies to be brought in. Situation in Syria is somewhat similar to situation at the beginning of civil war in South-Eastern Ukraine. It was there too, I remind you, where continuous lines of troop disposition were drawn, but actually only the populated areas were controlled- roads, crossroads etc. And to whom it was necessary, they passed through them.

As far as the underground communication goes, first, system of tunnels goes right underneath the cities, and second, they are not of operational, but of tactical length (couple hundred meters), and they are intended mainly to get out of line of fire.

In early December the Syrian government agreed with the opposition a plan for withdrawal of armed groups out of Homs. The agreement between government and opposition has been concluded after the meeting in the city with UN staff that worked on the final variant of the document. It implies opportunity for rebels to return to peaceful life after they surrender their weapons. According to employees of the UN, cease-fire may be the most effective way of regulation in the country where for five years war continues.