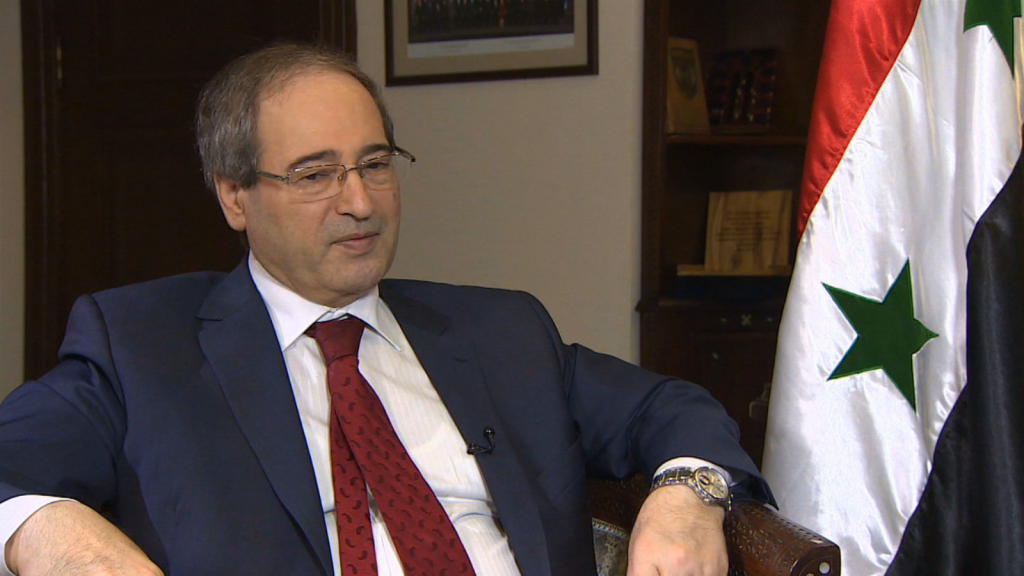 On Wednesday, Syrian Deputy Foreign Minister Faisal Mekdad said in a press conference that the Syrian government has conducted its own investigations about Khan Shaykhun chemical attack.

During the press conference Mekdad denied the accusations of the United State and the Organization for the Prohibition of Chemical Weapons (OPCW).

Mekdad also revealed a series of evidence claiming that the Hay’at Tahrir al-Sham (HTS) and the White Helmets fabricated the attack.

“The White Helmets acted and fabricated everything that happened in Khan Shaykhun, They are from al-Nusra front –HTS- ,and they are financed by western countries like Britain ,France ,Germany and the United State of America,” Mekdad said.

Mekdad also accused the United State and the UK of breaking the Chemical Weapons Convention by supplying terrorist organization in Syria with toxic materials.

The Syrian deputy foreign minister emphasized that “Damascus announced that it has no chemical weapons, and all of its stock was destroyed in western countries”.

Mekdad stressed that the Syrian government has implemented all of its commitments. However western countries are using this case to blackmail it.

On August 15, a report of the Syrian Network for Human Rights claimed that the Syrian Arab Army (SAA) carried out at least other 5 chemical attacks on opposition areas after Khan Shaykhun attack. Yet, no real evidence has been provided.

Much more plausible then the US, French, English version

And what ? Sue them. They have killed Syrians. USA is a terrorist state.

Stop being kind with western terrorists.

Things goes boths ways. Might be Syria is just a hobby send by Allah.

Cut all ties with USA and put them on terrorst organization list.

Then sue them in the UN for human crimes against the syrian people.

I don’t know what you are waiting for.

No doubt that chemical weapons are provided to terrorists by USA and UK .The only possible solution for peace in the world is 3 bombs : London Washington and Tel Aviv ( atomic of course )

And the atomic is hidden in Your behind an hurts?

Jens, what hurts you is that USA-ISIS and Nato have been defeated by Siria Russia and Iran. That hurts you and all the hypocrites, that pay their taxes in their countries and their governments fund ISIS. ISIS will soon bomb you in your country bastard !!

If the world put USA on their list of terrorist organizations and cut ties with them. They are finished. The world is too weak with these terrorists.

I have the impression that everybody is scared of them. They even are scared to talk.

To play Devil’s advocate here, just like when the US was making these wild claims and Nikki Haley turned in her Oscar winning performance, can we have some evidence please? While I think the fabrication charges to be both very likely and it fits the motive, to quote an internet meme: Pics or it didn’t happen.

What is the more likelihood ?

SAA used chemical attacks against a target that they were crushing ? USA gave chemical weapons to FSA to kill syrians and blame Assad ?

It’s like when USA killed 100+ soldiers in DZ to help ISIS. Everybody was saying “Oh USA made a mistake. We have the impression that USA is helping ISIS” blah blah blah.

The weapons they captured actually were CS grenades and CX rounds for weapons produced in the US only , the company out of UK called Cherming and another in the US who supplied the chemicals is Non-Lethal solutions.This is also covered on south front start looking and stop being lazy.This was covered on Al -Mayadeen News , learn another language other than english.

Conclusion is that : USA can kill syrians even with chemical weapons and nobody gives a f… And Syrians will forgive USA for this crime because they also don’t give a f… is USA is klilling Syrians everyday.

Yes and the earth is flat. Thats why we dont fall off …

“report of the Syrian Network for Human Rights” is like…Headchopper Tribune or Jihadi Times? Where do I subscribe?

Try Gabriel. Start with G in th phonebook if You havnt rolled cigarettes with it an some usual hay.

U.S. Senator John McCain: We’ve been funding ISIS all the time. US creating, funding and arming terrorist organizations including ISIS, Al-Qaeda etc for covert operations in our beautiful world.

US are using chemical weapons in Syria and blaming Syrian government for that. If you love your country and your nation then Zionist proxies will kill you. They will divide your country.

Whilst the SAA soldiers collect and document evidence of EU supplying terrorists with chemical to make WMD’s/ Guess what Dumbass Nikki Haley is doing? She is still showing her colleagues at the UN a staged photograph to members who all have access to facebook and, who most likely have seen the soldiers evidence and know that her own government was a supplier of chemical weapons;Bloody idiot! Her own government is guilty of a crime but, she continues to show these fake photos??? What an overpaid and under equipped officer of an international organisation?

The cat crept in, crapped and crept back out. The damage has been done and Nikki has a new topic for her outrage this week.

The white helmets have been unmasked by Canadian and British journalists and UN reps as insurgents and agents of the US and the UK. Therefore, it is most likely that Mekdad is telling the truth.

Very strange version. Helmets are well descriebed incl. support from the beginning. So they put those helmets on their heads instead of covering their faces or what?

“unmasked” meaning that they were not good Samaritans in Syrian occupied cities there to help the trapped and wounded but actually insurgents fighting the Syrian army and supporters, and pretending to be do gooders.

The chamical weapons is probatly Aleppo soap taken from the deserts odf Syria.