The US-backed Syrian Democratic Forces (SDF) have seized back the village of Hunbud that they had lost to ISIS militants earlier.

Recently, the ISIS terrorist group has launched a series of counter-attacks in the area of Manbij, regaining some settlements from SDF units. 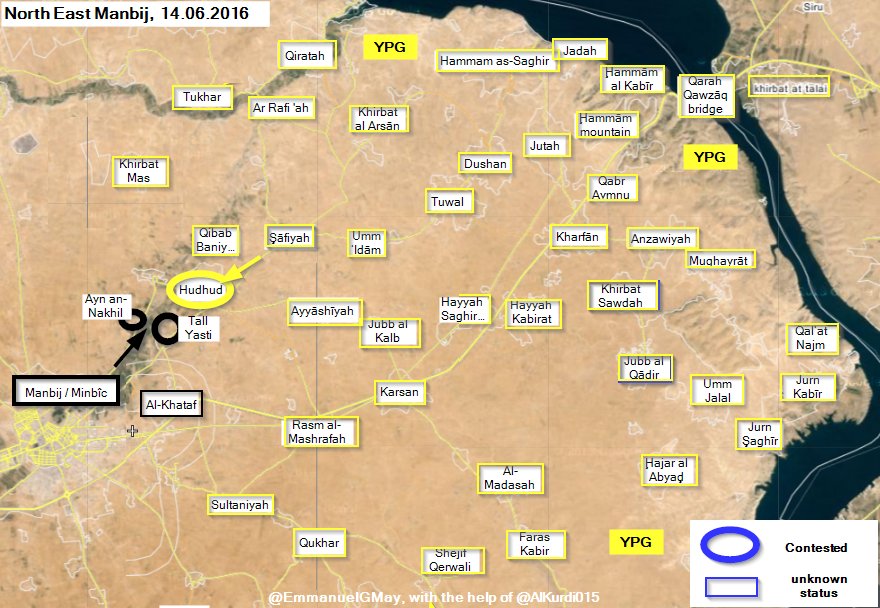 This map by @deSyracuse gives a better picture of the actual lines of contact. The ‘big yellow blob’ around Manbij gives the impression of a much larger SDF presence than actually exists compared to the well-entrenched ISIS positions. This doesn’t say anything whether or not the SDF can/will take back Manbij, but the @deSyracuse one shows just how tenuous the supposed siege is in reality. Fine for the SDF as long as the weather is good and they can rely on U.S. air support, but a few days of cloudy weather or dust storms and ISIS would still be able to mount a strong offensive wherever it wants. 3000 SDF fighters are spread out pretty thinly across all the territory they’re holding. I would imagine there’s a lot of sympathy from the locals, which helps the SDF in intel.

This is an ok map, but it’s from June 13 and has been already released: https://southfront.org/isis-counter-attacks-in-siyras-manbij/ You are right, the storm of Manbij is a big problem for the SDF. We’ve noted this many times. Just an example: https://southfront.org/kurds-advance-further-in-northern-syria-after-encircling-manbij/

I realize that it was already released. I reposted it to make a point: the thousand or so square kilometers around greater Manbij area are not saturated with SDF troops – they’re spread pretty thin among dozens of villages. Of the high-side 3000 – 3500 numbers usually given for SDF troop strength around Manbij, half of them must be involved in holding territory or protecting lines.

I’m trying to arrive at some reasonable estimate of a number that are, in fact, physically available to move into Manbij. Hundreds? A thousand? Not a bad-sized force for one or two main attack fronts, but they are defending at least four Manjib ISIS salients (supply/escape routes) and need to eventually mount an offense into the city.

Of course they’re not going to publish troop strength/position, but I’m still skeptical that they have either the troop strength or desire to enter Manbij. If the plan was originally to simply lay siege to a city for months with tens-of-thousands of civilians, then one has to question the humanitarian aspects of such a move.

According to the US, 3000-strong “Arab force” will sphearead the storm of Manbij. In other words, about 2000 YPG fighters and 1000 FSA fighters, supported by the coalition air power and special op. units will participate.

Might it be possible that they will reinforce heavily out of Kobane for the big assault? Reinforcements can be there is something like two hours out of Kobane.

Leave at 3 a.m., attack at six a.m. Reinforcements would be heavily YPG but if necessary they could be out in a few days.

In storming the city, they would do wise to try to split the city in two so they can mop up more easily.

Kurds don’t have enough fighters to control Arab-populited areas. So, they will always suffer a lack of manpower.

Maybe so, but Manbij is not arab but mixed. On top of that, the YPG recently got a large influx of arabs within their ranks. However, they would be wise to control the city by a majority arab force after it has been taken.

It will be easier when they get into the kurdish belt to the west. The first kurdish villages there are already reported as being taken today and yesterday.

“a large influx of arabs within their ranks” – about 10% of the total numbeers. It doesn’t look as a large infllux

The influx is two ways : Into arab batallions or even new batallion but also more and more directly into the YPG. I do not have figures, but a 10 to 15% of YPG being arabs feels right. Given that a year ago it must have been a little above zero, this means some 5.000 joining the last year.

Pretty impressive to my mind.