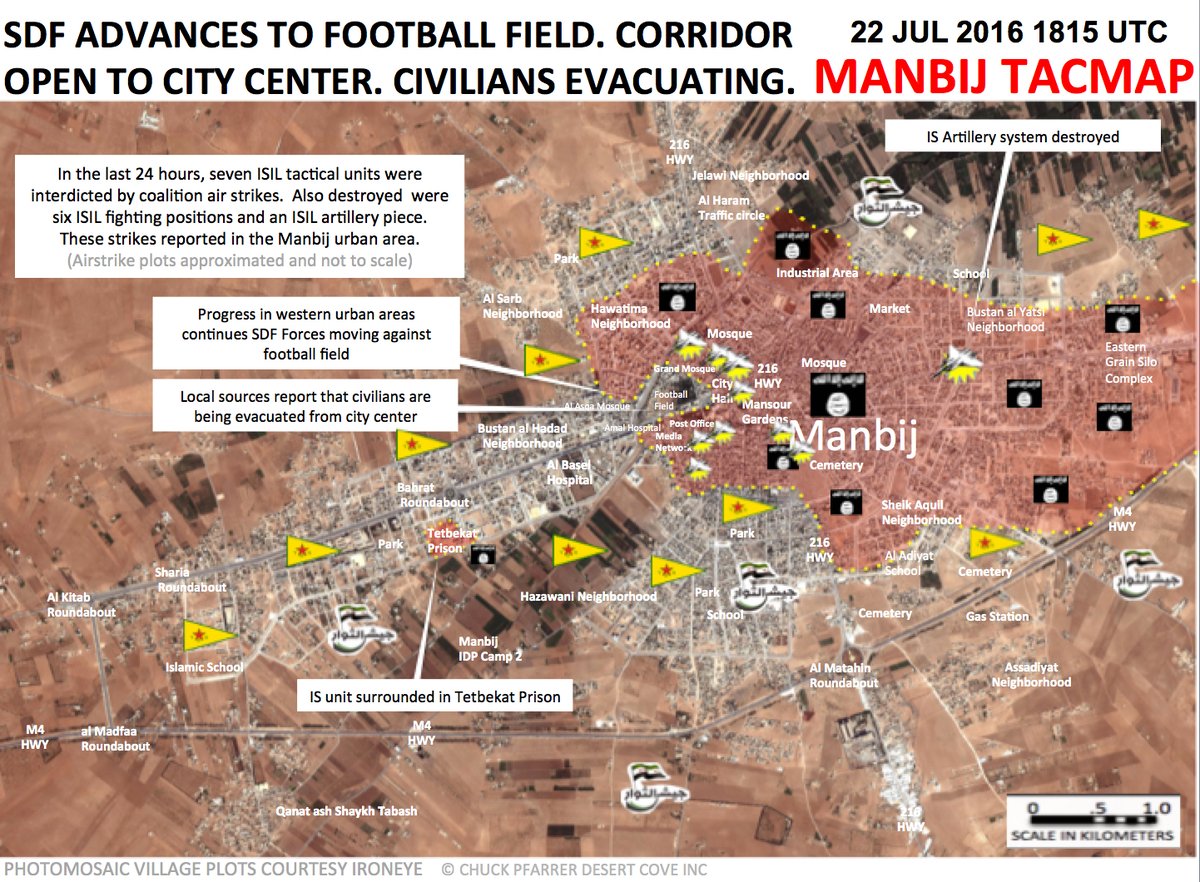 The US-backed Syrian Democratic Froces have secured Hazawni District of Manbij from the ISIS terrorist group. The last ISIS unit in the area is the group besieged in Tetbekat Prison. The US-backed forces also sezied Manbij’s football field west of the city hall. Position there allows Kurds to develope advance in the city center.

The ISIS reportedly rejected the US-backed offer to withdraw from Manbij. If this is true, heavy clashes will resume in the coming hours.

Recently the SDF offered ISIS fighters to freely leave the city with arms and military equipment in order to avoid “civilian casualties.” 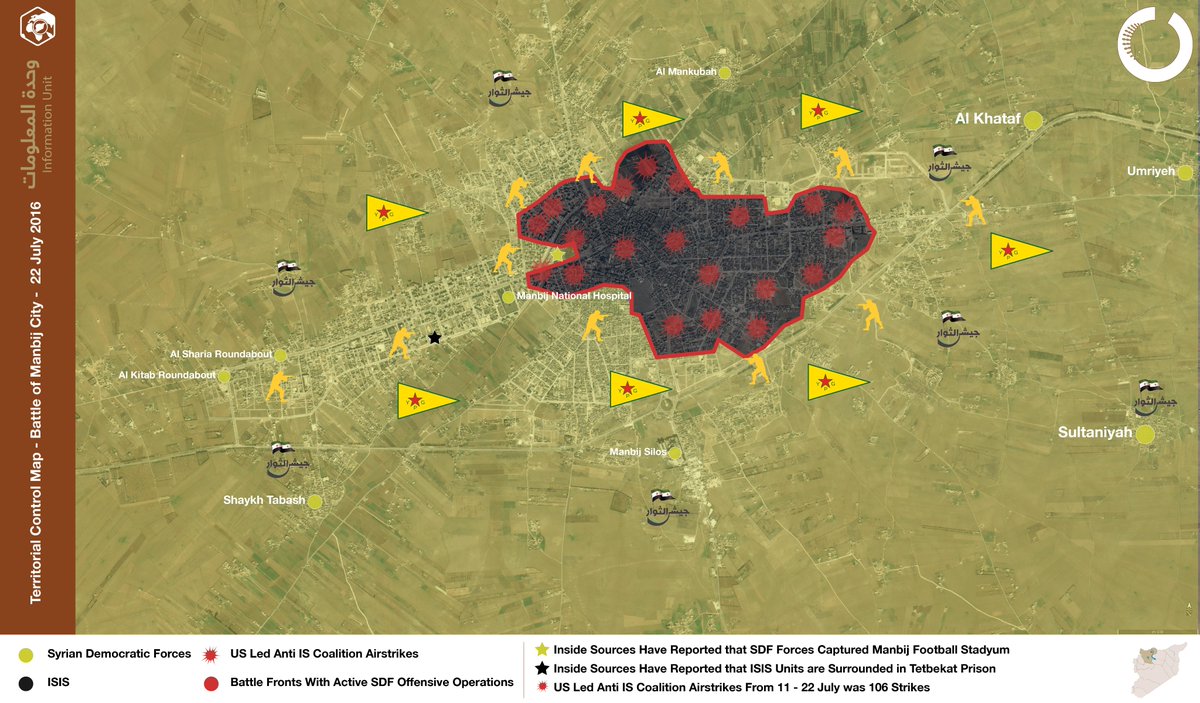 “…Recently the SDF offered ISIS fighters to freely leave the city with arms and military equipment in order to avoid ‘civilian casualties.’…”

OK, So the purpose of fighting ISIS is simple land-grabbing by the U.S. proxy, the SDF? Every headchopper they let go away is going to go somewhere else and continue killing.

The U.S. knew from the start this wouldn’t go well with an under-armed and entirely too small of a force. They knew the civilians and ISIS would be squeezed to the central part of the city and aerial bombardment would eventually be to costly in terms of civilian lives. They knew it would turn into a stalemate since all the civilians wouldn’t just leave – nobody wants to die in the desert while the U.S. levels their city just like Kobane. So after all the SDF and civilian lives lost, their genius answer is to just let ISIS go to prevent more civilian casualties? What idiots would create a massive hostage situation and then ‘solve’ the problem by letting the criminals go?

I always suspected the intent of ‘liberating’ Manbij had more to do with the U.S. trying to steal as much land from Syrians as possible, and this pretty much confirms it. If the Syrians, Russians and Iranians were in charge of this operation, then ISIS would be wipe out – not relocated.

1. SDF isn’t US proxy, it’s YPG proxy. It was created primarily to fool the Turks so that their democratically elected Sultan won’t be pressured enough to involve directly in this war. 2. Of course it’s land grabbing. Kurds are not agressors, war isn’t their hobby, it never was unlike the Arabs, Turks, Americans, Persians or European imperialists. They are just trying to liberate the land they view as traditionally theirs, i.e. Rojavae Kurdistan. They don’t want to fight anybody unless it’s necessary, be it Daesh, Arab regimes of Iraq or Syria or Persians or Turks, but they are forced to do so for their survival. 3. Yes US knew it from the start, and that’s why they didn’t prefer to support the Kurds in the begining. Rather they supported different Arabic factions many of which are Jihadi groups who have links with Al-Qaeda and/or Daesh. It was only after the safe passage PYD and PKK created for the Yazidis, they start mild support for the YPG which grew to complete support during the seige of Kobane and which was facilitaed by the complete distanced makeover of PKK syrian cadres. It was more because of the effectiveness rather than preference. US and European imperailists including UK, Russia and others always prefer Turks and Arabs over Kurds. That’s the reason for their condition all these years. Even now, US isn’t supporting a Kurdish referendum for independence. 4. In urban warfare, colateral damage is high. That’s a fact. Of course the good party intends to minimise it, but that’s not an excuse for not liberating the area. Squeezing the enemy area is the only way to pressurise the enemy to give up or face destruction. Daesh in this case prefer the second option wherease YPG would prefer the former option to save the civilians. What’s wrong in it? Daesh will go to somewhere else and do their shitty things there. Where is that somewhere else? No new land will be given to them, rather the land already under their control and where they are already doing their shitty things, so no more harm can be done by it. Rather it saves the people from where they leave. Besides, it is neither the duty nor the responsibility of YPG to liberate the Arabs and their land. It is the Arabs, Turks, and Persians and their European (including Russia) and American allies who are responsible firstly for their century old misery and secondly creation of Daesh and other Jihadis and the Brutal regimes. Let them solve their problems by themselves. No kurdish life shall be lost for their greed and stupidity. 5. Syrians, Russians and Iranians are incharge of many operations, just not in Rojava. What are they doing there? ISIS isn’t still wiped out. Also, didn’t they create any civilian destruction? Who put all the barel bombs? Wasn’t it the Syrians? The very involvement of the Iranians is secretarian. Russian involvement is as Geo politial move as the US’ one. None of them care about the people. The only difference was observed that US jumped into save the Yazidis and no one else did, even though it wasn’t geopolitically sound move as basically it was boon for the PKK and it’s affiliates. Kobane was a different matter.

Russian involvement is Geo political move, hmmmm I thought Syrian Gov. begged them to help? and Syria and Russia were friends from far back in times. On the other hand USA and EU have so far destroyed at least 4 countries in ME which did not ask them for help, nor did they invite them in. Wouldn’t you agree that putting the USA, EU into the same basket with Russia would be wrong? This you may have done in pure frustration or ignorance or what ever the reason, but it is NOT RIGHT! And if you keep on spewing the same ideas over and over again, then you have an agenda and we will see you through quickly…

The first sentence shows your grasp of Geopolitics. Just because some one invites, the other party doesn’t join the war unless they have geopolitical goal in it. Syria and Russia are not human beings to be friends, they were and are allies and have “friendly relationship”. Such alliances and “friendship” keep changing depending upon the geopolitical needs of the countries in concern. No, EU were not involved in destruction of “at least 4 countries in ME”. EU is a political not military union of 28 west European countries. Some of them individually have taken part in various wars. About Libya, the attack was authorised by UNSC of which Russia and China were a part, but they didn’t want to take part in the war itself, also in the decision making itself. If they were really against it, they could have vetoed it. So, their intention are clear, they wanted the end result but without blame. Now, Yes, US and some European impereiallst powers are responsible for messes around the world, forget WANA. This is beyond doubt. But while mentioning that, ignoring Russia’s role in the world geopolitics is not a naive but baised thing. The mess in Middle east is primarily the fault of Ottomans, British, French and the Russians. It was only after the October revolution, Bolshevik Russia distanced itself for a while. That may be was due to Lenin’s principles or due to their inability to project power or both. We can never know for sure. But what happend during Stalin onwards? Who was the imperialist of the East European countries from Eastonia to East Germany? I don’t think it was USA. How about Afghanistan? Even Mao’s China resented USSR. After the breakup Russia slowed down, not because it became democratic, but because of it’s inability. They were not even able to clean up the mess inside their own country, forget their closest allie Yugoslovia. It’s not thier good will, which they never displayed if they had but inability that distinguished them from the Americans. Another thing too, US and Europeans care about life of other people as much as Russia does, only difference is how much they care about their own citizen, and we know clearly which do more. Also, many messes in Africa was made by both USA and Russia and sometimes China. Who made North Korea? Was it China alone? USA, UK and France were in camp South Korea (of course with imperialist agenda) , so did China and USSR had in their design of North Korea, and we can clearly see the result today. Now, its really funny to me, how you could put personal feelings when somewone gives you facts. My take is that, if I don’t agree with someone, I put counterponits to establish my views, rather than blaming others as “Frustrated” or “Ignorant” or having “Ulterior motives”. But then again, I accept that it’s your prerogative.