On June 24, the US-backed Syrian Democratic Forces (SDF) eliminated an ISIS pocket north of the town of Dashisha in the southern al-Haskah countryside, according to the Syrian Observatory for Human Rights (SOHR).

Kurdish activists said that US-backed forces had  captured the villages of Rujm Al-Hajar and Matari and the area of Tell Manakh north of Dashisha. However, the SDF is yet to confirm these claims. 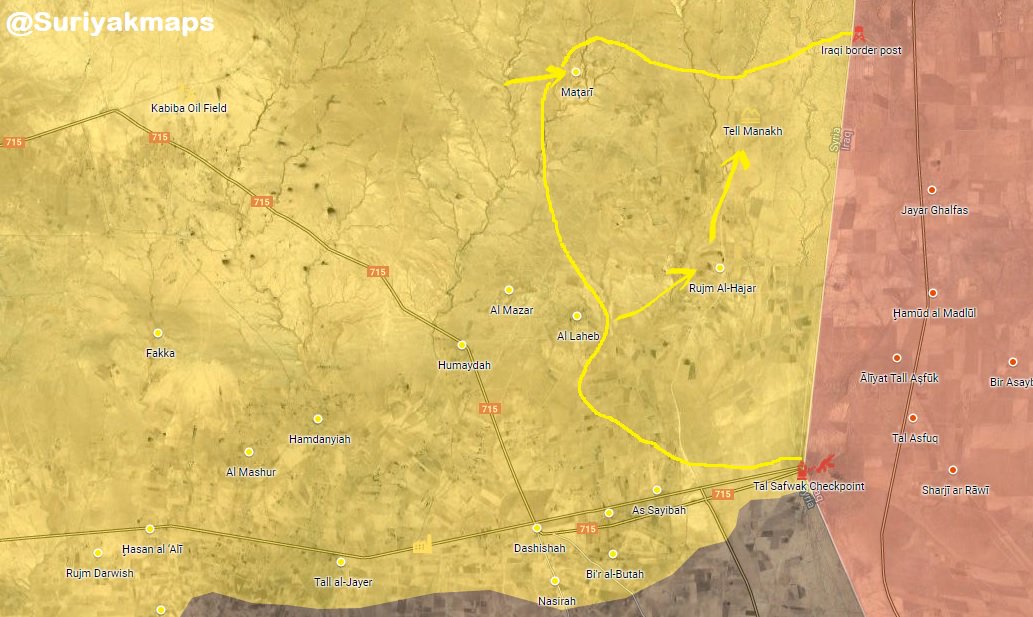 A day earlier, the SDF reached the Syrian-Iraqi border east to the town of Dashisha and captured the Syrian side of the Tell Safouk border crossing, thus achieving the main goal of its operation in the southern al-Hasakah countryside.

The SOHR reported that the SDF and the US-led coalition are currently preparing to launch a new large scale attack on the strategic town of Hajin and the remaining positions of ISIS along the eastern bank of the Euphrates River. The pro-opposition monitoring group added that the Kurdish-dominated force had deployed dozens of armored vehicles near ISIS positions there.

According to the SOHR, the new attack of the SDF will begin in the upcoming days. US-backed forces will likely face stronger resistance from ISIS fighters in Deir Ezzor because they are well trained and armed.

“…and captured the Syrian side of the Tell Safouk border crossing, thus achieving the main goal of its operation in the southern al-Hasakah countryside…”

I couldn’t agree more. CENTCOM’s SDF merc army isn’t trying to eliminate ISIS – they’re trying to steal and control all the Syrian/Iraqi border crossings as if they owned them. They can collect taxes, collect data on who comes and leaves, wave through not-ISIS-today head-choppers and mercs entering to fight the SAA, allow US supply convoys through and (most important) prevent anything or anybody with a hint of Shia or Iran from crossing the border at all. There will always be a couple of CIA or MI6 stooges in an air conditioned office at the crossing ready to call out the CENTCOM dogs if anything does go south.

This is exactly why the US is obsessed with replacing the Syrian government with the SDF in Albu Kamal, and why they grabbed at Tanf. Control is the ultimate opiate of psychopathic Israeli-firster neocons in the US Deep State (the one that doesn’t exist).

wow, seldom do i read intelligent stuff here.SPOT ON.thank you

You seldom post anything intelligent. Screaming like a prepubescent kid about “satanic jews” hiding behind every corner on every fucking article isn’t exactly a sign of intelligence.

It’s a sign of loneliness, delusion, and mental illness, things I am 100% convinced you have very intimate experience of.

You’re obsessed with nonsense. The SDF and SAA have been sharing control of the eastern border crossings for quite some time.

You said the exact same thing on at least 3 other articles. You ever wonder why people no longer really respond to most of your posts or upvote them the same as they used to?

It’s because this shit gets boring and repetitive.

Yes, you are right, I should not expose thieves and child butchers repeatedly. I am hundred per cent agree with you.

You’re not really “exposing” anyone by spamming. Going off topic and sounding like a broken record repeatedly isn’t a particularly useful strategy in bringing people around to you point of view. Actually engaging in dialogue and typing up fresh commentary instead of copy pasting crap you saved on your computer would go a much longer way.

Great, they just telegraphed the new offensive. On the other hand it is not likely ISIS will hear this report fast enough to make a difference if the assault is pursued immediately.

I’m sure that ISIS is fully aware of what’s in store for them once this operation started.

Abu Kamal watch out. The Isis fighters at Hajin have had the last few months to get ready now, they’ve been rehearsing what they’re supposed to do for their US masters and are ready to go. The US special forces across the river from Abu Kamal, have supplied them with all the relevant intel they have on the SAA troops positioned there, and they know exactly what they need to do to inflict the most damage on the most sensitive targets. Those big French artillery guns with a range of 45km, devastating firepower and a 1 meter accuracy will come in real handy too. I hope the SAA are dug in and ready, just in case there’s another accident like there was at Dier ez-Zor. 100 dead SAA and Isis nearly over ran the city thanks to US mischief, I hope this is not going to be a repeat.