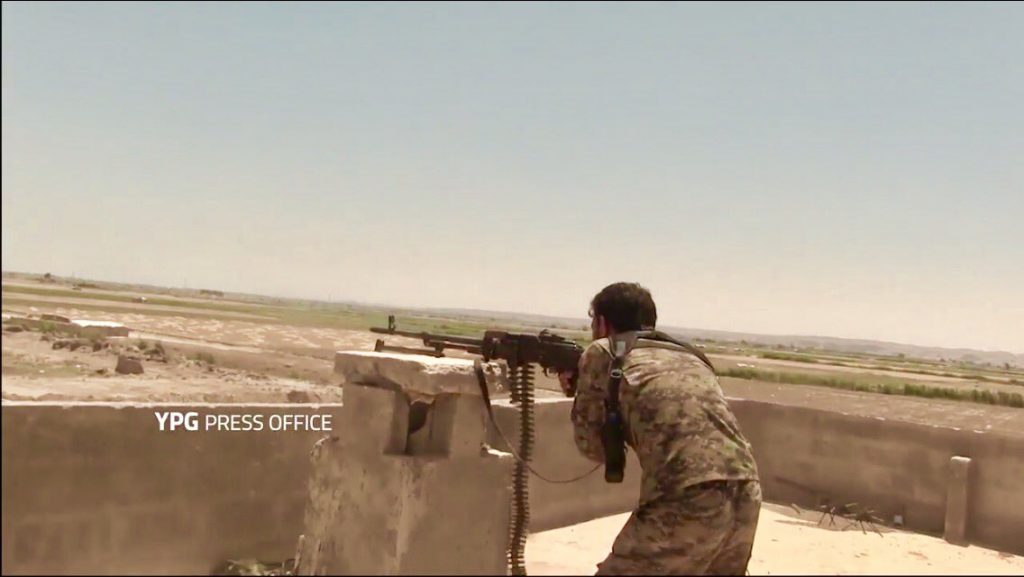 On Wednesday, the US-backed Syrian Democratic forces (SDF) took control of the Harqalah area in the western part of Raqqa city. Thus, the SDF entered Raqqa from the western direction after captured few areas in the city’s eastern part yesterday.

US Marines artillery units continued shelling Al-Mashlab district in the eastern part of Raqqa. The SDF captured a major part of it but clashes are still ongoing there. 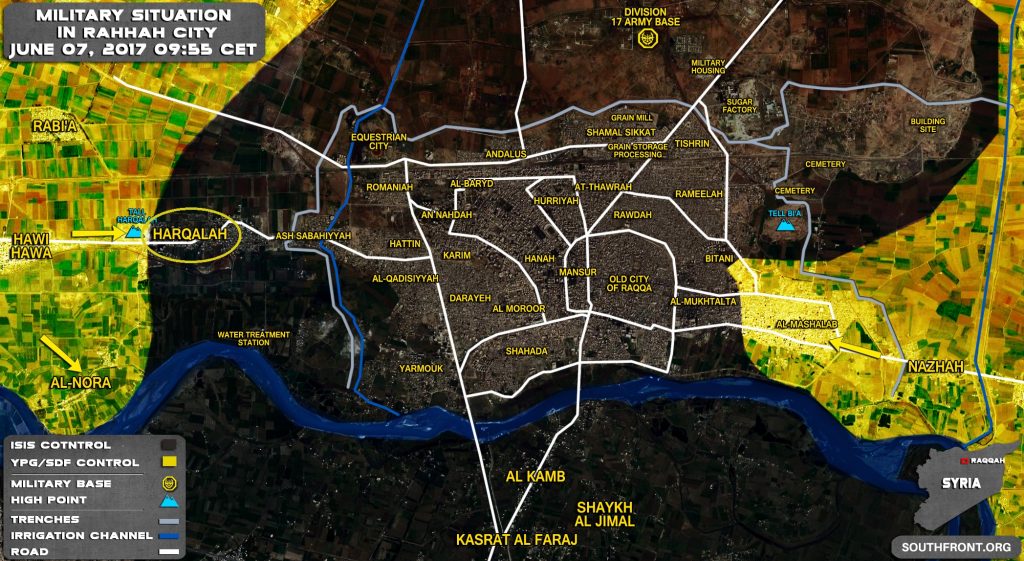 ISIS sources siad that 14 SDF members were killed in Al-Mashlab district yesterday. Furthermore, according to unconfirmed reports, ISIS fighters foiled a landing operation of the US-led coalition in the southern countryside of Raqqa yesterday.

Satellite images taken on May 20 showed that ISIS didn’t place any fortifications on the main entrances of Raqqa city, but only inside the city.

None of the historical entrance gates to Raqqa’s old city were barricaded by the so-called Islamic State on May 20, satellite imagery shows. pic.twitter.com/9VjRrbUFQp

ISIS militants are still able to withdraw from Raqqa via the southern countryside of the city and it seems that the SDF and the US-led coalition actions are aimed at pushing ISIS to do this.

SDF members are inside the recently captured Hewa village:

SDF cannot be ,but maybe erdogan ,saudi and Asad is Israeli puppet, new and before. SDF Mujahidun is our Heros.

It’s a strategy what US used in Mosul, it’s not just because of Deir Ezor, simply in the city is very hard to combat, if they see there is an escape route, after demoralizing ISIS, it can be easier, naturally Russian war planes can hit moving targets easier if they wish too. Deir Ezor is far away, they can do it easily, as they have done in the past. Either way this accusation is pointless. Look at Mosul, PMU cannot simply advance on that tiny land. Either way ISIS needs to be smashed away, and it was Assad choice also, not to beat ISIS, beat green areas first, less ISIS, or not terrorist does not matter. They wanted all at once. The difference between PMU and SDF is quite dramatic, they haven’t that manpower to encircle Raqqa safely, they can wish that they can share this burden with Assad groundforces also in Palmyra or Deir Ezzor, but anyway Deir Ezzor is far more simpler to get back, even if they lost it, than Raqqa, as it’s far more smaller.

Oh wow, The most fakest fighting force fighting in Syria against ISIS but not really

That video… They are not fighting anyone! A leg stretch through deserted streets, blow up a building for fun, do a call and response shout, fire a few shots here and there… hey, this is real war! OMG please, stop torturing innocent observers!

This crisis deserves a place in an alternative universe. The two biggest purveyors of terrorism on the planet punishing #3. The response is silence/acceptance? There is no legal, lawful reason for any of the parties to be upset with anyone. Playing geopolitical chess with other people’s lives is deeply immoral. No one should support or condone it.