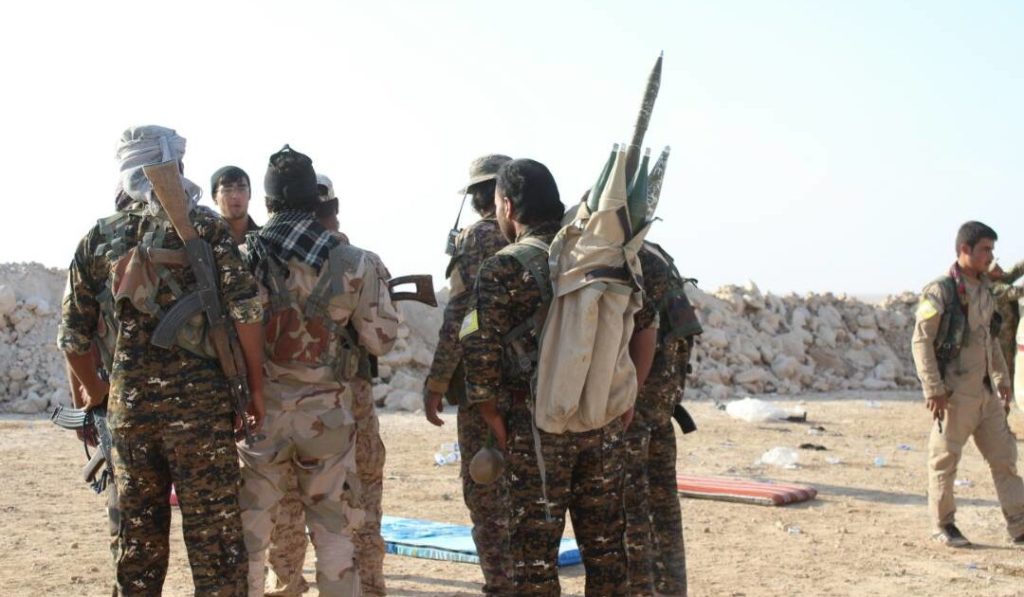 On November 10, the US-backed Syrian Democratic Forces (SDF) announced that its fighters captured Lawzia village 34km southeast of Deir Ezzor city. The SDF said that 8 fighters and 2 vehicles of ISIS were destroyed by its fighters during the clashes in the village.

The SDF also captured Omar oil fields housing complex in the southeastern Deir Ezzor countryside. SDF fighters killed 18 fighters of ISIS in the housing complex, according to the SDF.

In a separated development, Mustafa Bali, the head of the SDF media center said that the SDF is ready to host civilians who are now trapped in Kate Island north of Deir Ezzor city. Bali called on the international community to pressure the Syrian government in order to allow the civilians to flee towards the SDF-held areas.

Back on November 3, it was reported that the SDF and ISIS reached a deal to evacuate the civilians from Kate Island. However, it appears that the deal failed after the SDF demanded the surrender of the remaining ISIS fighters on the Island.

Seems DeZ city still not a full 100% under SAA, or rather its allies, control as they keep on shelling a small island with a few dozen IS and hundreds of civilians, killing by now dozens of the civilians. It is telling those civilians are desparate to flee to SDF and not to Assad.

Al Bukamal reportedly still not fully captured, or partly retaken by IS, as the weird silence and lack of proof of Hezbollah taking the city continues.

I wonder why SF is not following up on the situation of the city.

I’m a bit disappointed in that myself. To be a site for true “independent thinkers” it’s good to provide coverage of the full picture and all aspects of the war.

It’s the point of obsolete middle-age tactics of keeping the “strongholds”. In modern military doctrine, so called “stronghold” is under one’s control if the stronghold is cut away from any communication, and one have 100% fire control over the area. Including each square meter of the stronghold. If somebody enters with the live force in the town, which inhabited area is 600 m wide, that’s the point of no return/no escape of remaining forces in the “stronghold”. The battle is finish, and cleansing operation started. Cleansing operation regarding such environment and man power engaged, could last 48-72 hours. Massive hostage situation, or special live targets of interest could prolong standoff for 12 hours. But, the resistance is futile. ;)

Is this like the report a few weeks ago from the SAA that they had fire control of the Omar fields and in the end they had nothing?

Mosul was under complete fire control of Iraq and still after they gained that, it took 7 months to clear the city. For Aleppo it took 2 years. Long range artillery gains you fire control when you are within 40kms of a city.

Fire control does not give you anything against an entrenched enemy which also has artillery and even without artillery, it will be difficult, the more so when there are still civillians around.

A small city is of course easier to subdue.

The point about Al Bukamal however is not the ability of SAA to capture the city, which they will not as they lack the manpower and are not even really present there, or the ability of Hezbollah and PMU to take that city, but the wide gap between the claims made by Russia (not SAA as far as I know) and any factual proof that somebody took the city and the only recent releases are of IS, showing resistance.

In fact, now it is the credibility of Russian MOD at stake. Imo if they will show “proof” of occupation tomorrow, in my mind it will only prove the city was taken this night, nothing more.

Keep focus on Al Bukamal. I made my opinion based on video released yesterday by Russian media, which clearly showed position of the forces in conflict. Regarding who is liberating Al Bukamal, I do not catch the point. Legal government of some country has rights to invite anybody to restore legal government system inside the state borders. That’s why in legal system exists terms “invited” and “invaders”. You do understand what were the Canadians in relation with Netherlands in May 1945? :)

Yes, I understand fully that the Netherlands was liberated, as an occupied country, by US, by Canada, by Polish soldiers (Free Poles, not the communist Soviet version, by UK and more. Especially in the south many polish soldiers died and we still have their cemetaries.

However, Syria is not occupied (other then the new Turkish colonies of Azaz and Idlib, but involved in a civil war where all sides are to some extent proxy forces and the most dependent on foreign aid is Assad, having some 100k fighters from all shia areas fighting for him under Iranian supervision. One might even ask how far Assad is in controlof his allies.

I’m sure that Putin does. As well as did Stalin with Polish troops in Netherlands. Beside, Assad (family) friendship with their allies is not from yesterday.

The Polish military that helped liberate the Netherlands in 1944 were anti communist and under allied command. After the war they could not return to Poland and most settled in the UK, some in the Netherlands and elsewhere. They were only able to return in the 1980ies but I do not know how many did. Polish army in the West numbered some 250.000 soldiers and over 20.000 were killed in action. One of the forgotten heroic histories of WWII.

You can call me Al
Reply to  GRAHL

You do understand he is Kurdish don’t you ?.

This is really fun. I have been called almost anything here. Seems I am mysteryman?

Bllx. I hate being wrong. Where about’s in The NL ?.

When Daesh came along they said “Join us or die!” SDF is doing the same thing to Daesh now!

A certain % of Kurd battle/contact victories is over blown and propoganda. Kurds supposedly battled ISUS out of Raqqa. Required far longer time than US Generals boasts of success. Wrap up evidence on Raqqa is that US bombed the place into the stone age . Numerous ISUS leave with US and Kurd cover. .. A few times Russian TAC air and Syrian – roast the trash from on high. Syria’s problem East of the Euphrates is the Arab tribes and other Sunni who take the bribe. If Damascus had pallets of Cash like US did in Iraq,Syria. …the Tribal leaders may have taken the wheels off Uncle Shlomo’s ride.

It is being reported that Al-Bukamal is again under ISIS control coinciding with Putin/Trump handshake & agreement. If this news is true, expect al-Bukamal to be handed over to the illegal Zio/Nazi US colonial imperialist invasion and occupation forces. Expect ISIS to be transformed into SDF again for a complete sell off of Syria by Russia. Let’s hope this news is not confirmed. But if yes, at this point, only a military solution is possible for a just resolution of the Syrian conflict. The TRUE resistance axis of Syria, Hezbollah, Iraq and Iran need to keep on fighting until all of Syria is liberated from the foreign occupation forces. No Astana or Geneva talks under duress are possible.