On June 22, the US-backed Syrian Democratic Forces (SDF) resumed its advance towards the Syrian-Iraqi border and captured the villages of Zibah, Bi’r al-Butah and al-Sayibah in the southeastern al-Hasakah countryside, according to Kurdish sources.

Some Kurdish activists claimed that the SDF reached the Syrian-Iraqi border after liberating the three villages from ISIS. According to the activists, the SDF is currently clearing the desert area north of the villages. However, these claims are yet to be confirmed by the SDF’s media center. 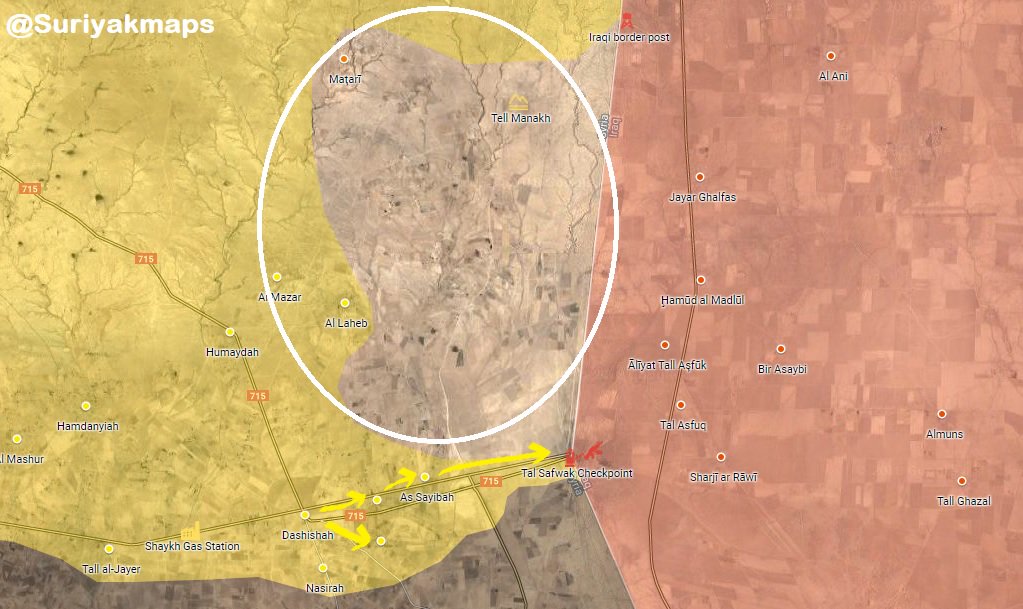 On June 3, the US-led coalition launched a military operation against the remaining ISIS fighters in the town of Dashisha in the southern al-Hasakah countryside. By June 17, coalition forces had achieved their goals and had captured the town, which is located only 8km away from the Syrian-Iraqi border.

The US-led coalition will likely launch a similar military operation in the upcoming weeks to clear several areas in the southern al-Hasakah countryside and southeastern Deir Ezzor countryside from the remaining cells of ISIS. These cells have launched dozens of cross border attacks on the Iraqi military since the beginning of this year.

Judging by the lack of any sort of counterattack I would surmise that the ISIS command is fragmented and troops poorly supplied.

So why dont You make it, so 10 milions g´can go home in Syria as well as all the others.

Go tell that to Suheil al-Hassan.

And while they are at it, they can take the European Jews back to America.

Washington ordered them to withdraw.

Ego dictated you say that.

Shouldn’t use the word “capture” in reference to the SDF because there fighting with ISIS is a proxy and the territory is handed over to them.

Not even unborne children having not the brain fullfilled, would belive that.

And do you believe this Jens? ISIS is a useful tool for the US coalition to stay in Syria for as long as possible. :(

Of course it is. I dont see that at all.

USA went in there because ISIS became like Al Qaida was. You do forget to see the many things we, USA and almost the rest of the world has done to limit ISIS even they mainly kill muslims OUTSIDE Syria.

You also ignore we and USA was called in again and has builded an army primarly against ISIL and affiliates(saddams).

Here the things in Syria are small. If ISIS were a tool, it was for a while but only against Assad. USA never would have supported SDFs hard, so they could take estimatly 20% of the land and est. 20% of its population.

None in the coalition , which we are – now almost passive in – apart from money – support we are in Syria as well as Iraq for other purposes then keeping ISIS and a few more Jihadists down.

Hope to see ISIS crushed soon. But you have to admit they receive support from various agencies across the Jordan border. Mostly Saudi money I think.