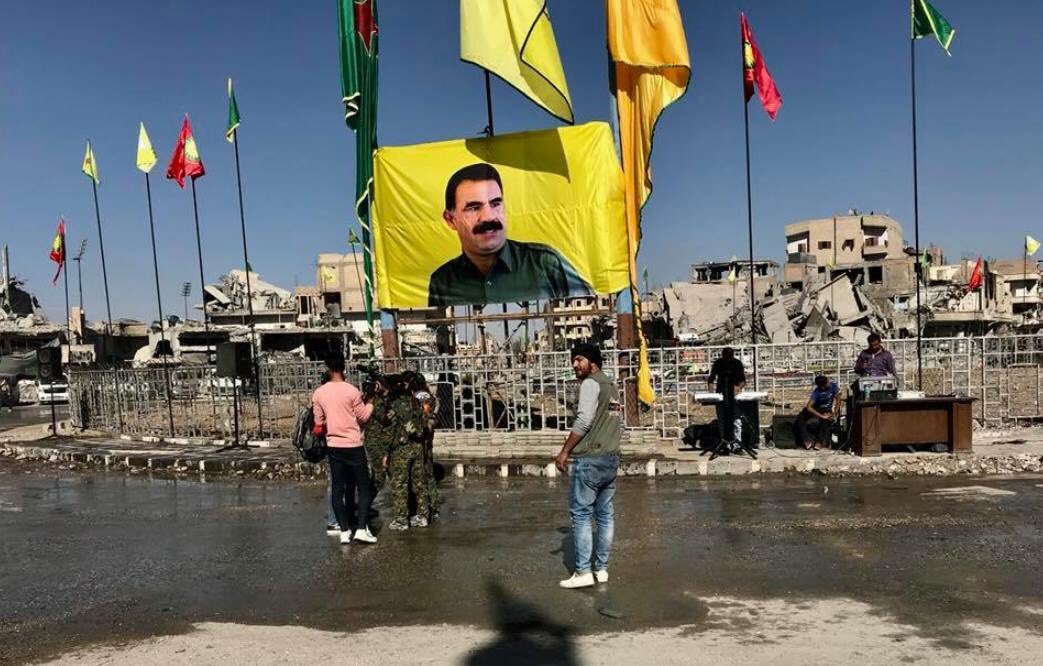 Meanwhile, Syrian opposition sources said that the SDF banned civilians from entering their houses in Gharibah al-Sharqi, al-Jasimi, al-Bisiten and Muijil villages in the northern Deir Ezzor countryside. The sources added that SDF fighters looted many houses inside these villages.

Local sources from Raqqa city reported that the SDF banned the civilians from returning to their houses in al-Mushalib district in the eastern part of the city.

According to the sources, civilians protested against the SDF ban. However, SDF fighters allegedly opened fire on them.

Video for the demonstration who faced by #SDF militia with weapons.#SDF #Raqqa #ISIS pic.twitter.com/QvodPFM4Tz

The pro-Syrian opposition news blog “Raqqa is Being Slaughtered Silently” said that at least 12 civilians were injured during the SDF attack. Some of them are in dangerous condition.

civilians were shot by #SDF while peacefully protesting.They were demanding to return to their houses in Meshlab neighborhood of #Raqqa city pic.twitter.com/lBYLjd1PD5

These accidents are considered a logical outcome for the tensions between Arabs and Kurds created by the SDF in its areas. The upcoming months will likely witness more similar incidents as the SDF appears to be unwilling to change some of its polices.

You know how democratic a country is when it starts painting and displaying HUGE portraits of its political and ideological leaders. Cult of personality. Always a good sign. That was the first thing I noticed when I first visited Iran in the 90’s, huge portraits of Ayatollah Khomeini everywhere, painted on the sides of flat buildings. Similarly in Egypt with Hosni Mubarak proudly on display everywhere.

I always wondered why they did that. Seems very kultish (made up word, kinds sounds like kurdish) indeed. I heard Bashir Assad didn’t like seeing his portraits all over the place, but pleading for them to be taken down only resulted with more of em going up. I can’t confirm this so I’ll cite it as a rumor for now…

You should go to the UAE, Qatar etc., as soon as you get off the plane until you step foot onto the plane again, the huge pictures are everywhere….in all the offices, smaller pictures endower the rooms.

I got it, If a country cult a personality, it is a democraty country,, right ? For exampl, USA cult Batman, Superman,…. always those people needs a hero.

Here are some of exactions from SDF. Kurds who are taking Arab’s land, looting their homes and resources. Kurdistan is the major threat Syria will have to cope with in the near future, and above all frustrate Israel plans in the region.

Send the Turks in.

I hope so, but it does not look like that Syria will do it.

That banner depicts the Turkish/Iraqi PKK leader Öcalan – hoisted up in the Syrian Arab city of Raqqa. The US government and a raft of Kurdish apologists have stated unequivocally for several years now that the YPG, and its current re-brand as the SDF, are not in any way related to the PKK. This position is of course a political necessity for US government, given their current full political and military support for the YPG/SDF. For the simple reason, that the US’ own security services list the PKK as both an international terrorist organization, and an international narco-crime syndicate. So that banner is awkward to say the least.

Did you complain when stalin set up portraits of himself in German cities after ww2?

What sort of ridiculous attempt at a diversion from the SDF-PKK issue is that?

US IS HELPING PKKK TO CHANGE ITS NAME TO SDF OR YPG SO THE NAME TERRIOST COMES OUT. BUT BY CHANGIN NAME IDEOLOGY DOESNT CHANGE. US/ISRAEL DEFENTLY USING THIS KURDS STUPID TO CREATE NEW WAR WITH TURKEY/SYRIA /IRAQ/IRAN. BUT KURDS DOESNT KNOW THAT BY MAKING NEIGHBOURS ENEMY . KURDS WILL LOOSE EVERYTHING IF THEY COLLABORATE WITH US/ISRAEL. BCUZ THEY ARE BEHAVING LIKE OCCUPIER AND THIEF SAME LIKE ISRAEL

And the same as Israel, it could be in that land for very very long time.

I would need confirmation for this news, although it’s not unprecedented. The same thing happened in Sinjar too and even in Kirkuk.

Some of these Kurdish groups are extremely chauvinistic and rasist but because it’s not reflected in MSM, very few actually know that. You need to live among them and it’ll hit you hard in the face. It’ll get worse if such groups have power over others and then it becomes ugly. They do exactly the same thing which they accuse others of doing.

Because they have many links with each other; yes seriously.

I daid it months ago. The US/Zionist imperial scheme is predictable and follows the same pattern. Mass devastation and terror through carpet bombing later followed up by mass hoise to hoise mopping up operations to force the stubborn civilians who don’t want to leave their homes and city forced out of their homes at gun point. The indigenous population is then doported to Jordan or Turkey from where they end up as refugees in Europe, while Kurds living in Europe and Turkey are sent to Syria to replace them, thus artificially changing the demographic situation of the invaded and occupied territory. The neia woukd then play its role go re-write history by repeating ad nausea that those areas were in fact always Kurdish from the time of the Dinasaurs. The same exactly as the illegal foreign Zionist invaders and terrorists from all over the world did to the Palestinians in occupied Palestine. Not only so, but the US would later organize a so called ‘democratic vote’ exclusively between invaders and occupiers of those lands to get UN legitimacy. In other words, massive ethnic cleansing, extermination and eradication of the indigenous Syrian Arab, Yazidi, Assyrian and Christian inhabitants from their homes, towns, cities and villages to create another artificial state on stolen Syrian sovereign soil in the greater Israel project,

By not reporting who alledged, this article is gossip. Worthless.

When officials say something without presenting proof it is “alleged”. When ordinary citizens tell about events they have been involved in it is “reported”. A report from ordinary citizens is mostly much more reliable than official sources, because official sources knowingly create propaganda. It is not proven yet, but a lot better than propaganda.