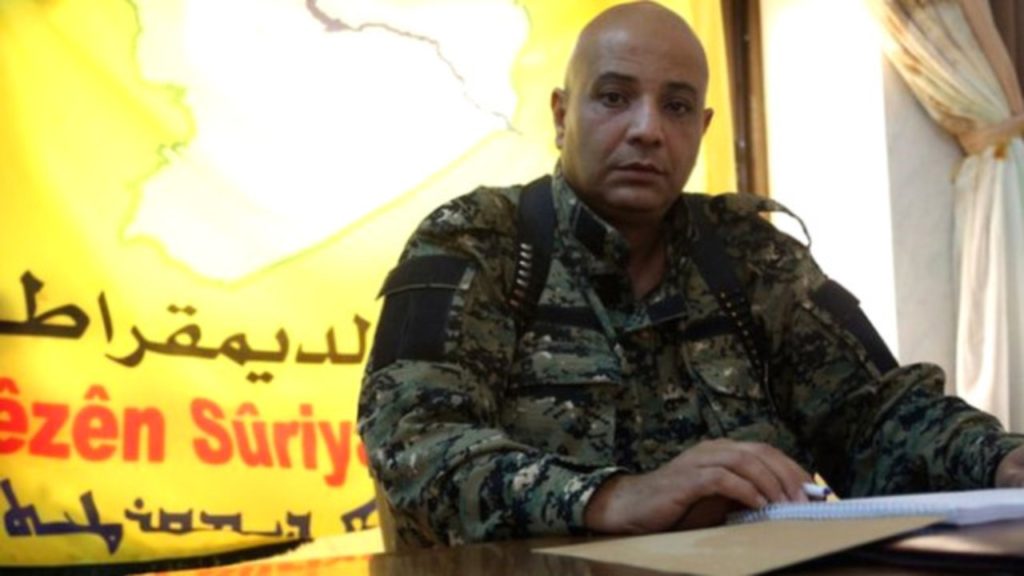 On November 16, the US-backed Syrian Democratic Forces (SDF) officially accused the Turkish intelligence and relatives of its ex-spokesman Talal Silo of pressuring him to defect. Silo defected from the SDF and fled to the Turkish-held areas in the northern Aleppo countryside on November 15.

“We believe that his [Tala Silo] disappearance is the result of a special operation of the Turkish intelligence in cooperation and complicity of some of his family members. We in the Syrian Democratic Forces assure the public that we are continuing our struggle against terrorism,” the SDF official statement said.

In its statement, the SDF also accused the Turkish authorities of threatening Talal Silo’s children, who live in Turkey, previously. The SDF also revealed that it is investigating the Silo defection now.

So who is Talal Silo?

52 years old Talal Silo is a Syrian Turkmen. He was born in al-Rai village in the northern Aleppo countryside. Silo joined the Syrian Arab Air Force in 1985. In 1987 he graduated from the SyAAF Academy and served as a lieutenant in the SyAAF.

In 2004, Talal Silo was arrested by the Syrian Military Intelligence. After spending two years in jail, Silo was dismissed from the service in the SyAAF. Silo was in the rank of Major when he was dismissed.

Syrian opposition sources claim that Talal Silo was arrested and dismissed from the SyAAF after the Syrian Military Intelligence had discovered that he was communicating with the Turkish Intelligence. However, pro-government sources say that Silo was arrested because he was unprofessional, and broke many rules during his service, and even damaged military equipment.

When the Syrian war broke out, Silo joined the Syrian opposition, and in 2013 he founded Seljuk Brigade, a Syrian-Turkmen armed group that was directly backed by Turkey. However, Silo run away to Turkey when ISIS captured al-Rai in 2014.

After staying for more than 18 months in Turkey, Silo joined the newly formed SDF as its official spokesperson. He became quickly known for his support for the US military deployment in Syria and for his negative attitude towards the Syrian government and the Syrian Arab Army (SAA).

Once a traitor always a traitor. Treachery in time of war is a serious offence.

It’s simple SDF and al are US/Zionist/NATO Proxy ! Since NATO tray to do a “Coup d’Etat” against Erdogan, Turkey move toward Russia, the US/NATO forged “Enemy” !

One of the US target with Jihadists support is to built mess in the Muslims Central Asia World, the Russian Back Yard !

It is worrisome for a lot of countries in Asia, Africa and Europa …

Obama and Clinton were scrupules ready to blast the World to keep the US supremacy, Donald Trump isn’t that Bad !

No he is just an idiot!

He is rough and rude, “Presidents” are only Lobbys “Speakers” Obama was well “Profiled”, the form was excellent, his Deep Power warmongers ground “Devilish”

It seems he was an opportunist mercenary playing several sides at once. The fact he left his family in Turkey in the first place may show his true allegiance.

Turkey today allegiance is toward Russia, not anymore toward NATO who tray to overstated Erdogan !

I do not consider Silo’s defection as a notable blow to the SDF but it would indeed be interesting to know what has caused his defection as there were no known disagreements or differences of opinion known that could cause a defection.

If it turns out the he was coerced by blackmail, that only shows a negative light on his blackmailers, not on the SDF.

So I hope the media will follow this and I hope we will get to the bottom of this surprising development somewhere in the coming weeks.

“I do not consider Silo’s defection as a notable blow to the SDF” go figure.

“interesting to know what has caused his defection” whores are gonna whore, especially when things turn different than anticipated and their employers can’t fullfill all the promises they made em.

What would the Turks gain by blackmailing a SDF spokesman to come to their side? If I want to gain a significant tactical advantage over my enemy I would like to have a major commander ‘defect’ to my side. One that has intel on my enemy and could sway some of his former comrades to come over as well. Nabbing the spokesperson on the other hand seems hardly worth it.

Unless….. the dude had major access to SDF intel. One that the Turks are desperate to exploit. So, what is it?

He was probably the brains behind sdf all along even when erdo still a pal of yanquis. he is a turcoman allied with turkey and always was and will be. As long as sdf was not really a threat to erdo the ottoman had him there to control and spy on things.now erdo is anti yankee and sdf more dangerous salo defects to turcos because of natural allegiance or forced. Simple as that ! Thats my take on this.

Silo is dumb as missile silo. :)

Birds of a feather tend to know each other well

It is neither here nor there.