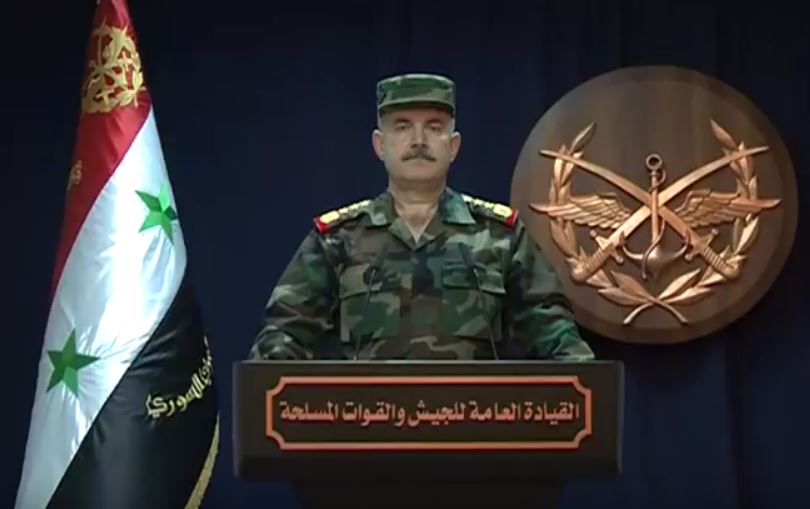 On April 14, Brigade General Ali Mayhoub spokesman of the Ministry of Defense of Syria announced in an official statement that the Syrian Army (SAA) had imposed its control of the Damascus subrub of Eastern Ghouta.

“In conjunction with the response of our air defense systems to the triple aggression launched by the United States, France and Britain on several targets in Syria, units of our armed forces and allied forces accomplish the complete cleansing of the eastern towns of Ghouta, in the countryside of Damascus, from terrorism,” Brig. Gen. Mayhoub said in the statement, according to the Syrian Arab News Agency.

Brig. Gen. Mayhoub also confirmed that all members of Jaysh al-Islam had withdrawn from the Duma district, that was the last opposition-held area in the Eastern Ghouta region. The Syrian defense ministry spokesman added that the SAA will begin now clearing Duma from mines and IEDs.

Jaysh al-Islam agreed to leave the Duma district towards the Turkish-held areas in northern Syria on April 8. The evacuation of Jaysh al-Islam from Duma lasted until April 12. On the same day the Russian Military Police began deploying its units in the district.

According to Syrian pro-government sources, Duma will be run by a local council and secured by the Russian Military Police and the Syrian Police for the next few months. A similar plan was successfully implemented in the eastern part of the city of Aleppo after its liberation in late 2016.

Excellent stuff, well done to the Syrian and allied forces involved in removing this “blade to Syrias throat” for good, this was one of the harder nuts to crack if nott the hardest, with the freed up forces now liberating other pockets should proceed far more smoothly.

Trump, May, Macron and Bibi : die and swallow your kippa !

You can call me Al
Reply to  Russie Unie

Good work and congratulations to the SAA!

Mountains, where the fuck are you, bitch? Didn’t you say these militant groups in Eastern Ghouta would hold out for years in some glorious last stand?

Where the fuck are you bitch? Why you no longer commenting on the website? Embarassed your head chopping friends got smacked around?

where are you, Mountains?

Maybe he joined dutchnational after his favorite buddies got arsefucked too?

I sort of miss Dutch a bit, he was always good to laugh at and cheer oneself up – that “Mountains” just gets on my t1ts.

Took a nasty fall, off the side of the Mountain of Rubbish.

dont bother him now, he is in his jerking off prayers, watching the missile attack and dreaming.

I am not sure about that – “The organization has rejected membership of the Free Syrian Army.”, to be honest I cannot keep up with who’s who or who backs who anymore, but these vermin are backed by Saudi as opposed to the Turkish backed vermin …..maybe they will eradicate each other.

That would be nice…but the Rich Saudi Boys won’t wait for that…and take the plane to Wahhabistan or are smuggled out… this is the Vermin you want to exterminate for sure…they’ll inherite daddies money…and can buy new mercenaries…the poor Vermin will be dog chow..

What will Turkey do with 8,000 Jaysh al-Islam soldiers? Re-arm and send to…..

They were sent to the future Slaughter House, where TOS-1s will roast them in a Hell-fire, as they make their way to infinity screaming

Just the opposite, I believe the FSA and these Jaysh al-Islam do not see eye to eye. So it could be fun to watch if I am correct.

This is very good news this morning. This is the reason which made Trump, May and Macron mad and frustrated. Kick them out from Syria these Western morons are illegal there.

Another humiliating defeat for the zionist warmongering scumbags.

PLease can we see the map?

You can call me Al
Reply to  Naija Lolade

“Jaysh al-Islam agreed to leave the Duma district towards the Turkish-held areas in northern Syria ” and then they will meet HTS and kill each other – sweet.

“Jaysh al-Islam agreed to leave the Duma district towards the Turkish-held areas in northern Syria on April 8”…TRANSLATION…FUKUS(France, UK, US) INTERNATIONAL MERCENARY TERRORIST, moved to Turkish border to joint Turkish FUNDED TERRORIST to organize new attacks and invasion of Syria.

I hope SAA goes now to the south pocket of ISIS, and erase totally these Israel-USA-NATO’s children.