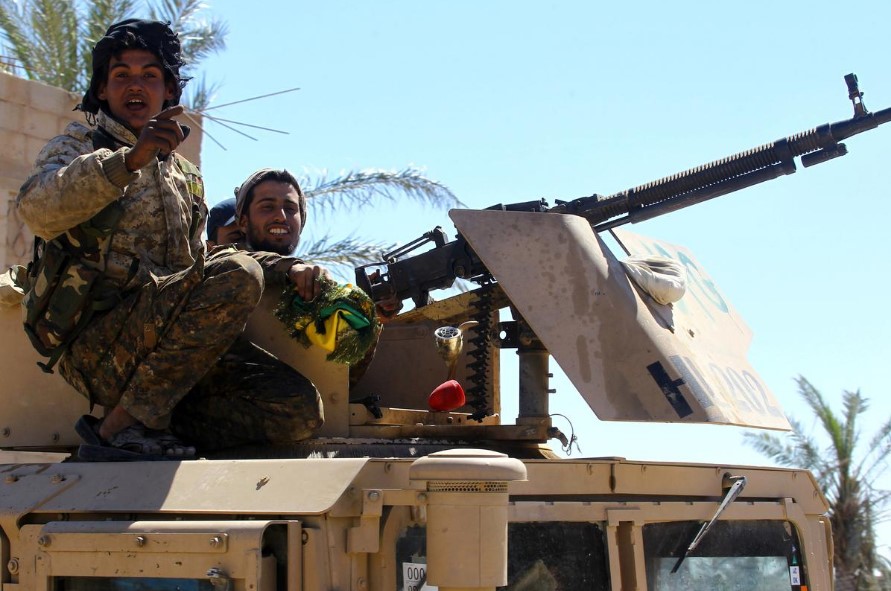 The Syrian government will recapture territory controlled by the US-backed Syrian Democratic Forces (SDF) and Hayat Tahrir al-Sham in the same way it “liberated” other parts of the country, Syrian Defense Minister Ali Abdullah Ayoub says.

“We do not compromise when it comes to our right to defend [Syrian] sovereignty,” Ayoub stressed at a joint press conference following a meeting with Chief of Staff of the Iraqi Armed Forces Othman Al-Ghanimi, and Chief of General Staff of the Iranian Armed Forces Mohammad Hossein Bagheri.

He stressed that the SDF is “the only card that remains in the hands of the Americans and their allies”.

“The Syrian government will deal with this issue in one of two ways: A reconciliation agreement or liberating the territory they control by force,” he said.

Ayoub continued by saying that Idlib will also be recaptured by the Syrian Army.

“The Syrian government will reassert its complete control over all Syrian territory sooner or later,” he said. “Idlib is no exception.”

The defense minsiter emphasized the importance of cooperation and coordination between Syria, Iran and Iran to combat mutual threats. He noted that the recent talks “will help us to continue to confront challenges, dangers and threats” posed by terrorism.

SDF is a collection of mostly Kurd pimps who will sell out to the highest bidder and have been licking Zionist arse since 1960’s when the fat pimp mullah Barzani became a CIA and Zionist whore. These turds will eventually be crushed again. The Iranians, Syrians, Iraqis and Hezbollah are meeting in Damascus.

May I presume you are not pro-Kurd ?.

The Kurds are the most treacherous scum in the region and have backstabbed everyone. Historically, they have been hated by all for collaborating with foreign forces, especially the Zionists.

nah – that’s the squatters on the stolen land where they squat. those are the guys that are in need of an early elimination.

Remember that the Talebani and Barzani families were on US terrorist list, before the US needed a second front to attack Iraq from the north. For that commitment to allow and support US troops to pass through northern Iraq, they vanished from the list and got all the frozen assets released. Business went better then before for these families, and also US politicians had their fair share.

Russia can not make alliances with anyone as it is unprincipled and controlled by Jew oligarchs. Even the ex-Warsaw Pact countries hated the Russians and still do. The Ruskies invaded Hungary and Czechoslovakia just to keep them in line. Russia now is much weaker and prime target for Americunt and NATO poodles for Balkanization. Russia is in Syria for its only external naval base and also to protect the Zionist scum. Russia has not bleated a word condemning the Zionist occupation of Golan or Shebaa Farms. The freak Putin has invited his master Nutter Yahoo to Moscow 15 times since the Syrian terror war began.

They fall in love lol

Well, what did the US do in Guatemala, or Grenada, or…?

Many Russian oligarchs who owns big industry inside Russia lives outside in Israel, London or USA. They try to be member of the supra-national Zionist clube. Should Kremlin use their International influence or nationalise. Its a difficult situation.

I wonder also why and how the Russians welcomed Israel after they killed RuAF officers.But that’s besides the point since Russians hold steadfast unto the principle of offering both cheeks for the slapping as they have done with Turkey.

And they should not have too part of their strategy was the rebuilding Syrians army so they are not stuck their with no plan and looking incompetent like the US. does in Afghanistan and Iraq the Syrians must do this on their own and by all accounts they are moving in the right direction.

sothfront suppose should be southfront

Hahaha, indeed, thx mate. Typing on touch phone is not my best skill.

just for fun – no worries, typos are just hard to avoid, particularly when typing on the phone, I know.

sdf, wipe them out and herd them back to the border area as tenants under syria and assad.

good go for it, you have every right to do so.

SDF support from the US is coming from either Turkey and or Iraq. Denying US access to land and airspace. Will put the Kurds in the position of either having to negotiate, or fight the Syrian government without US air cover and resupply. Once this access is denied, the US will have to pull out entirely and stay out of Syrian airspace. The Turks and or Iraq are the ones fueling the US occupation and partition effort. They need to be compelled to discontinue this support. So that the war can be wrapped up with a minimum of hostilities.

We Americans also have the ace of space.

“We Americans also have the ace of space.”

Yes , lots of empty space. Between the ears.