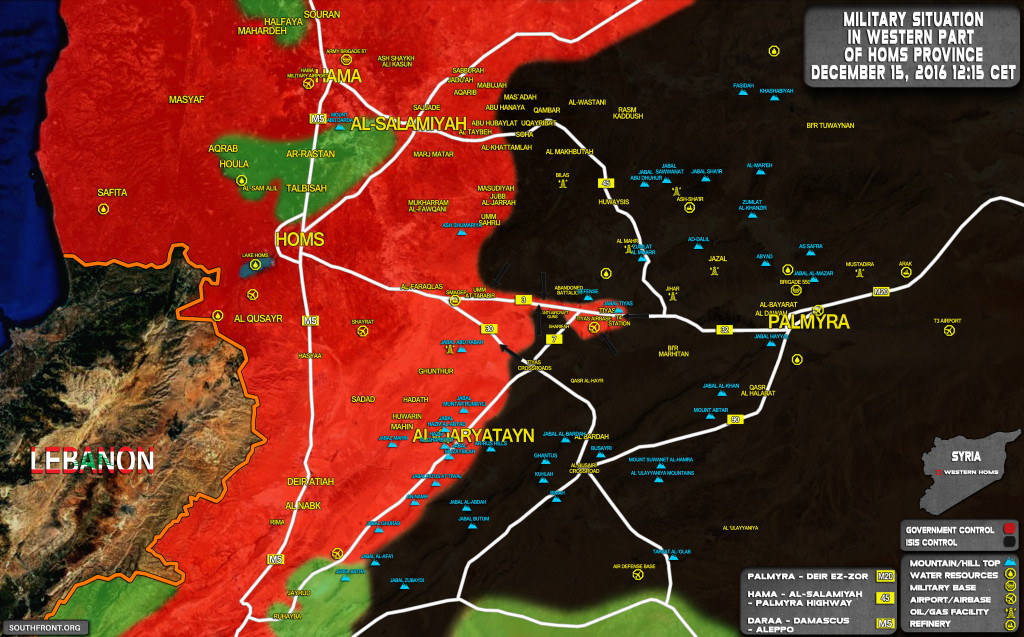 ISIS has regained control of the Abadonned Battalion area, the Defense Hill and the village of Sharifah from Syrian government forces and de-facto besieged the government-held Tyas airbase in the Syrian province of Homs.

The Homs-Palmyra highway is not fully cut off for the Syrian army and its allies. Last night some 200 Hezbollah fighters reportedly arrived the Tyas Airbase. However, ISIS has a fire control of a part part of the highway near the Airbase.

In general, the Syrian military and its allies can deploy more forces than ISIS has on the battle ground now. But government forces have a lack of time for this.

In a separated development ISIS terrorists attacked the area of Umm at-Tababir at the Homs-Palmyra highway. ISIS units exploit their advantage in maneuvrability and attempt to cut off supply lines of the Syrian army.

There is also a chance that if the terrorist group is not able to seize the Tyas Airbase, it will attack the city of al-Qaryatayn. ISIS already hit a government forces checkpoint between Al-Qaryatayn and Furqlus by a a vehicle-borne improvised explosive device (VBIED).

Not good,but it seems that the next SAA offensive will be into Palmyra region.

practically lost every gains against isis.

the SF wonders, what will bring the tomorrow. i can tell you. isis will attack the itriya highway, takes khanasser planes and aleppo will be island. and isis, nuszra and turkey together take aleppo.

but when i wrote about this reality what happens right now around palmyra, everybody was a wise man only i was the stupid. the idiot anti racist always asked me, why did not ask me the saa to enjoy them? so boyos, aleppo is pyrrhos victory. :(

This is of course total BS.

All these will force SAA to conduct their next campaign in this area. Idlib Campaign must wait a while. As a propaganda mateiral the lose of palmyra compensates the allepo victory. The timing and the execution of ISIS operations are really good. It will take time to move units from aleppo to other fronts, since those soldiers need to rest. SAA is a pre-modern weak army. Thats normal that they cant conduct 2 major operations in 2 seperate fronts.

Why can’t the SAA and allies just stay encircled in the airbase and wait it out like they have done at Deir Ezzor and Kuweires until help arrives?It looks like the airbase sits on a key road so that will make it harder for ISIS to drive further west.

As long as ISIS can’t rain down artillery and heavy mortars, couldn’t they be resupplied from aircraft? I’m not a military guy, so people like me are annoying. I know it didn’t work out well for Von Paulus but he had a massive army to supply but the 82nd did okay at Bastogne, the Syrians have been through this before and this is a small garrison.

“…Why can’t the SAA and allies just stay encircled in the airbase and wait it out like they have done at Deir Ezzor and Kuweires until help arrives?…”

They can and probably will. However, if there is nothing of value left at the airbase today, their best option may be to abandon it while the road west is still open. They will be able to take it back when they regroup, organize and get reinforcements. But if they need to hold the base, they probably can.

ISIS already controls the road to the south that would let them bypass the base entirely. There’s not much reason to do that. They (ISIS) are probably over-extended now and have not ambition to move on Homs. It would be suicide. They just wanted the T-4 pumping station near Khirbat Tiyas (just east of the airbase) and want the Syrians pinned down at the airbase itself if they can’t force them out.

They can. The ISIS (well, fake ISIS) armor/artillery is within a few thousand meters of the buildings and main parts of the airbase. An extended range medium mortar (80+mm) can hit them all day long from covered positions in the low hills north of the highway. The base itself is on a wide-open flat piece of land. There are many dug-in, fortified positions on the base, so they have some protection from shelling, but the Syrian forces there really can’t move around the base much without being seen.

“…couldn’t they be resupplied from aircraft?…”

If the head-choppers have any shoulder-fired SAMs (and there’s no reason to think they don’t), then nothing is going to take off or land at the airport, including choppers. There is the possibility of high-altitude airdrops, but risky and not terribly accurate. I don’t think they are worried about supplies, anyways. They probably have enough to last weeks, and the head-choppers will be driven off by then. As the SF article said, the Homs-Palmyra road to the west is (was) still open, so they could probably get a few truckloads of supplies in if they wanted.