The Syrian Army’s Tiger Forces, backed up by the National Defense Forces (NDF) and the Russian Aerospace Forces, have retaken the strategic town of Aran from the ISIS terrorist group in the province of Aleppo.

Aran is located directly south of the ISIS-held key town of al-Bab. Aran had been the last major ISIS stronghold, preventing Syrian government forces to reach the outskirts of al-Bab.

Clashes for Aran had been ongoing for almost 3 days and resulted in heavy death toll among terrorists. Some pro-government sources claim that over 50 ISIS members were killed in the operation. However, according to local sources the nubmer of killed ISIS members is between 20 and 25. The ISIS terrorists also lost 2 vehicles and 1 SVBIED. There are no confirmed information about the casualties among pro-government units.

Now the Tiger Forces and the NDF are advancing on the village of Birat Bab. If it’s liberated, government troops will be in a striking distance from the village of Tadif which lays only few km south of al-Bab.

If Syrian government forces reach outskirts of al-Bab before the Turkish Army and pro-Turkish militants retake it from ISIS, Ankara, Damascus and Moscow will likely be pushed to recognize the ongoing military cooperation on the ground on an official level.

SF recommends this text about the current military efforts of pro-Turkish forces near al-Bab. 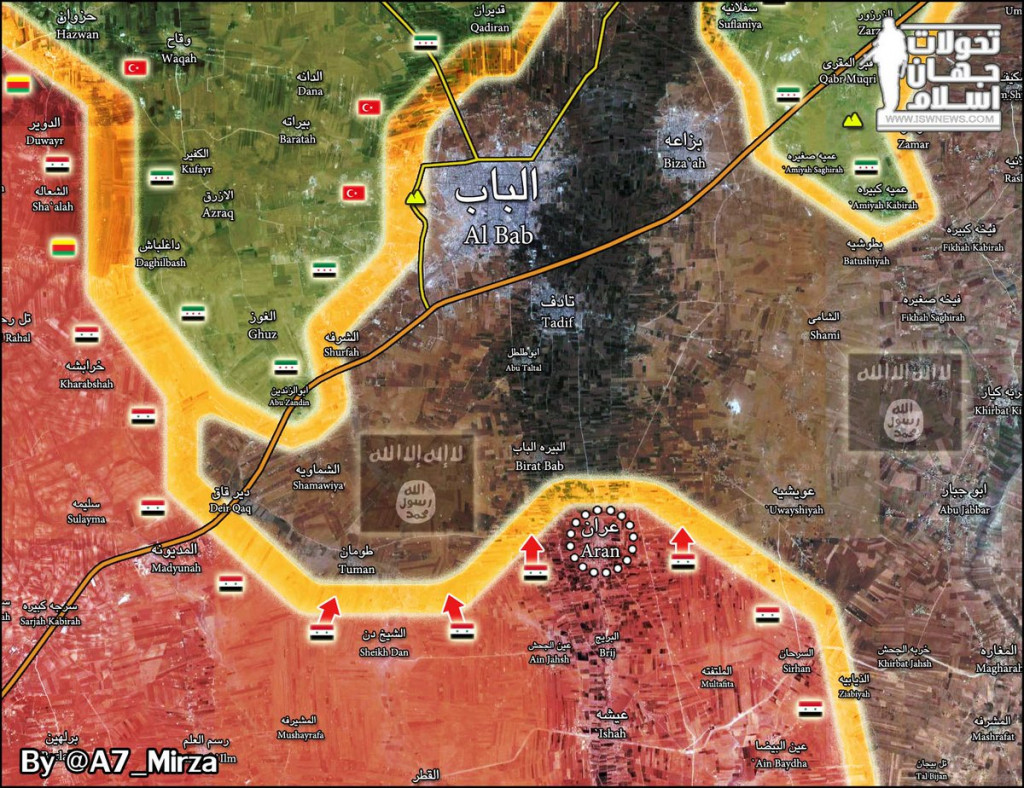 According to the Tiger Forces media official,Al Bab is not the goal.The wont advance to the city.He thinks that the next advances will be in east direction.

Where did you found it?

Aran ‘s capture is a major milestone on the kuweires front. It means ISIS in this front will have to play defense for the first time in years.

It looks like the turks want to take tadif, to secure the roadway running between their attempts to encircle Bab. They wouldn’t trust the SAA anymore than they trust the kurds to prevent reinforcements to reach ISIS defenders besieged in Bab.

Rather than be tied down in a siege of bab, the SAA forces here can capture more land going east of Kuweires airbase, towards the west shoreline of Lake assad. It will be well defended but the effect would be to weaken the defense of Bab and weaken attacks on the supply route to aleppo.

Also the SDF and kurds are about to cross lake assad and take the brunt of counterassaults anyway.

Or don’t close the gap, stop at Aran. Rely on air and arty to hurt ISUS. Let Turks and FSA do the hard fighting for Al Bab. Less casualties for SAA this way. I agree with post from Xanatos below.

Again we see SAA lost none.