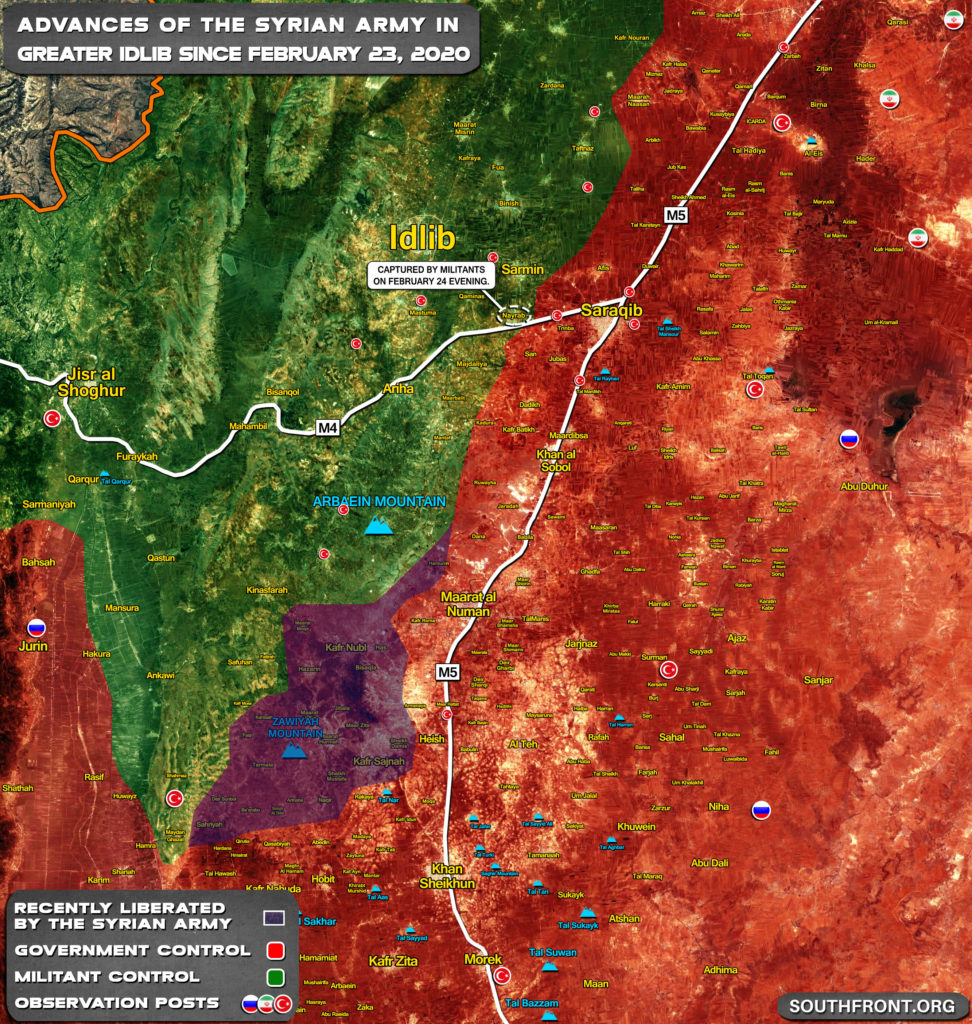 Since February 23, the Syrian Army and its allies have liberated 2 dozens of villages from Hayat Tahrir al-Sham (formerly the Syrian branch of al-Qaeda) and other Turkish-backed groups in southern Idlib. This advance took place amid an intense fighting in Nayrab, and Turkish-backed forces forced the Syrian Army to retreat from this village. However, this cost the Turks and their proxies another chunk of southern Idlib.

Reuters, AP and the like are taking this 1M refugee number as if it is the gospel. I don’t even see a counter-estimate to it. How many people were in the Idlib Province at the start of the operation?

In all the photos, I’ve never seen a single civilian. Certainly never an exodus of them.

I also believe so.

From a realistic view… Probably around 2 million including “refugees” and other planted US CIA “terrorist” agents…..

The “1 million refugee” pushed by the liars in the Jew spew media is pure propaganda and nothing more… It is now being used as their latest “weapon” on the gullible American public to push for direct intervention into Idlib to save the US backed CIA agents aka “terrorists”.

so stuck in a mountain fortress without a goat.. what ever will they do??????

FSA rebels recently captured the village of Al Duwair and cut off the M5 international road route north of Saraqib in Idlib and meanwhile the SAA is advancing between southern Idlib and northern Hama. how long will the FSA advance the counterattack on the region around Saraqib? I believe that the SAAs will soon force the FSA to retreat on Saraqib, but I believe that the FSA with the support of the Turks intend to recapture Saraqib and retake the M5. perhaps Erdogan really plans against fully attacking and regaining the lost territories for SAA?

Most of the shelling by Syrian Army and bombing by Russian Air-Force….are on villages, towns on the front-line that are being fought over. In nearly all of these locations, the civilians would have left a long time ago moving further west or northwards. The actual civilians being killed right now are minimal……..the majority of deaths are either the Terrorists (& Turks) or the Syrian Army + allies.

The Russians are certainly not bombing towns far away front-lines as there is no mileage in it….and achieves absolutely nothing. So western Mainstream media is absolutely nonsense as are the reports UNHR council.(British speaker)