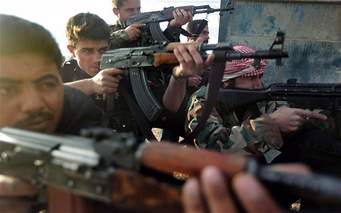 ‘Extremist gangs are on the retreat right across Syria, Russian air-force has helped push terrorists out with combined power of the Syrian armed forces and Syrian air-force’

As Russia continues its airstrikes against terrorist groups in the province the Syrian Arab Army along with its allies make major gains taking full control of Hader city, southern Aleppo countryside. The Syrian forces moved forward after Russian and Syrian jets hit key strongholds in the Aleppo province. Al-Nusra and Ahrar Al-Sham were said to have withdrawn from the Hader city area.

Syrian army positions bombarded Al-Nusra and Al-Sham positions within the Al-Harariya town in Aleppo countryside. Russian and Syrian jets struck Islamic state positions in Suwaida province losses are reported to have been high among the terrorists.

As Russia continues its operations along with the Syrian army huge gains are being made right across the country, the extremist groups are all on the backfoot withdrawing from their positions. Reports have suggested some have even fled to neighbouring countries.