The war in Syria has ‘reanimated’ the Soviet M-240 superpower mortars. 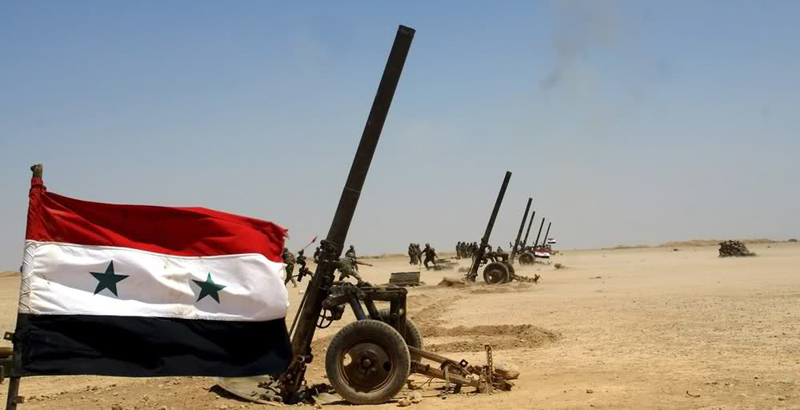 The Syrian civil war has forced the country’s authorities to retrieve weapons, which were used in 1950s, from museums and send it to the front, the Defence informational website reported.

Initially, the M-240 used old expired ammunition. However, after the start of the military operation of the Russian Aerospace Forces, Syrian mortar men started to use more modern mortar shells, such as the Nerpa active-reactive shell with fragmentation submunitions.

The mortar shell, weighing 240 kilograms, flies at 19 kilometers and strikes an area of 1.4 hectares. Military experts expected that the Smelchak controlled mortar shell, well-proven in Afghanistan, will also be used by the 240-mm towed mortar, but there are still no reports about usage of these shells in Syria.

The weight of the M-240 is more than four tons, the detachment consists of eleven people. The mortar tube should be mounted horizontally for loading. The maximum rapidity of fire of the M-240 is one shot per minute. However, this is enough for such firepower. In Afghanistan, the giant mortar eliminated terrorists, who were hindering advances of Russian troops, with the first shot.

The M-240s were replaced with the 2S4 Tyulpan self-propelled mortars in the Russian Army. As of 2016, a number of the M-240 is in service in Iraq and Syria.

Whoa.. this makes it seem like Syrian Army lacks equipment but has plenty of manpower, I’ve always thought the situation of being the exact opposite! I mean.. 11 men to operate that antique… i don’t even know how to call it…. football team mortar? Well I guess even after all these decades 240kg mortar shell is still 240kg mortar shell, pretty devastating, but it looks similar to situation in Ukraine where rebels were driving in IS-3 WWII tank xD I mean, it’s still a tank and with some HE or HEAT shell can still pack a punch

In guerilla type of warfare, brute weapons can make a loud statement, 250 kg shell is equivalent to a 500 lbs bomb, six mortars can fire a salvo and provide the equivalent of six bombs dropped from a Mig 25.

Actually, the SAA had neither numbers nor firepower, they held out against hordes of terrorists with modern NATO weapons out of sheer patriotism and loyalty to Assad. Only when the air support came is when things started to turn around, the airstrikes killed many experienced jihadists which explains why they’re only using cannon-fodder tactics today.

So 12 shells costing $6000 can obliterate a 100 square yard area in 3 minutes . Such tactics work with densely concentrated enemy personnel in areas they can not escape like Aleppo. When big shells come in they better be very deep in their holes . The blast alone will hurt ears of survivors in blast zone. Those more than 20 feet underground may be safe but deeper the better. The building above tunnel exit becomes rubble over exit. Life for US rebels will become very uncomfortable. 100 yards deep by 1000 yards wide can be destroyed by 120 shells costing total $60,000 fired by 12 crews 110 men in 10 minutes. That destroys all snipers, mortar teams, RPG teams along 1 kilometer 100 meters deep for $ 60,artillery barrage. Likely this strategy only works when 20 to 60 personnel are in target zone. Even if 20 to 60 rebels are killed by 60,000 barrage the cost is 3000 per rebel. If you have 10,000 rebels and spend $3000 per rebel to eliminate then cost is 30 million USD. Survivors of heavy mortar barrage will be discouraged and many will want to surrender. The 240 mm artillery crew firing from safe 19 kilometers is relatively safe from man portable weapons firing only 5-8 kilometers . An eleven man artillery crew firing once every 5 minutes can fire 500 shells in 40 hour work week with minimal casualties among artillery.

A few small neutron bombs would be a lot cheaper and not so time consuming, and it would send a message that Russia will deal with terorism in the most expedient and efficient way, without regards to “human rights” and other western propaganda. Deal with the enemy the most efficient way, and send a clear message to all the troublemakers in the area.

To put twelve 240 mm shells in each hectare requires twelve hundred 240 mm shells per square kilometer . These shells weigh 200 kg to 480 kg . So 240,000 kg to 480,000 kilograms in 1200 mortar shells per square kilometer. Ten artillery crews firing 100 shells each in 2 hours destroys one square kilometer. Aleppo rebels occupy only 40 kilometers and most are in 20 square KM .If they work 8 hours a day Ten artillery mortar crews could level the 40 square km with 48,000 shells in 80 hours two weeks. 48 000 shells of 240 MM mortar at $500 apiece is only 24 million dollars. That would incapacitate half or more of rebels. There are 10,000 to 50,000 rebels. The surviving rebels would be firing from behind small piles of rocks and easily removed with hand carried weapons. The cost of losing 1 Russian helicopter and pilot is easily 24 million. Its more cost effective to reduce dense rebel area to rubble . When weather turns cold the surviving rebels can be identified by FLIR and more artillery fire targeted . A fifty million dollar 100,000 artillery shell campaign would destroy the back bone of rebel resistance in Aleppo placing twenty four 240 mm shells per hectare. Only humanitarian concerns keep Russia and Syria pursuing the rubble option for city of Aleppo. This rubble strategy with artillery was common in WWII, Korean War, Vietnam war. As of 2004, artillery largely ruined Fallujah , with 60% of buildings damaged or destroyed, and the population at 30%–50% of pre-war levels. Aleppo is far more fortified and rebels have much better weapons than in Fallujah.

I don’t think that it’s US elections holding Russia back. it’s Putin’s legalism, he does not want excess civilian casualties. all of the cases you mentioned (and Yokohama and Dresden) were made by the US and British, but modern Russia seems to operate in a different way. secondly, he waits for the rebel pocket to shrink enough so the terrorist concentration will allow them to just bomb them to shreds

and also, Aleppo will and HAS to fall before elections. too much manpower and materiel is tied to it. Now the Syrians and Russians & Co. are busy foiling that major jihadist counteroffensive. if they succeed (and those big mortars give me hope), then they will again start to retake Aleppo bit by bit.

I think it is better to use siege tactics than severe aggression . The US destroyed Fallujah but ruins became a symbol for resistance. An effective siege can take months or years. The rebels of Aleppo have developed massive underground system far more developed than Fallujah . Syria and Russia do not want to waist manpower on house to house fighting, Although Russia and Syria has much air power most visible large targets in Aleppo were destroyed long ago. Aircraft missions take 30 minutes to arrive from base. Rebel man portable missiles appear then get used or disappear in 30 seconds before aircraft can arrive, The USAF has C-130 Spooky gunships that provide 40 mm fire outside range of most manpads. The C-130 could circle Aleppo for 12 hours per mission. Two C-130 alternating could replace thousands of men .Why does Russia have large turboprop gunship that can stay on target for 12 hours and range to attack without being hit by manpads? Gunships stay on target for far more hours than helicopters and can reach beyond range of manpads . The C 130 was extensively used in Fallujah and now is used in Afghanistan. Russia should have copied the C 130.

the shells weighs around 130 Kgs, of which maybe 40 is explosive. the article is wrong, at least according to a book on soviet artillery I have from the 80ies.

Yes this likely just disposal of old soviet surplus 240 mm shells. These shells may be 50 to 70 years old.

Shhh
Reply to  Paul 'my' Dickovv

What part is incorrect.

Shhh
Reply to  Paul 'my' Dickovv

When US attacked Fallujah, it used AC-130 gunships to carry out close-quarter precision airstrikes against enemy strongholds within the city. I do not know what Syria and Russia will use as substitute for AC -130 gunship.

No, Russia doesn’t have an AC130 equivalent… And although the AC130 has an advanced EW Countermeasures suit, it is a Low Treat Environment Air Asset. In Kosovo wasn’t used and neither in Irak I ….Only when it was known that there was no Manpads Treat the AC130 was used… Against a regular force, the AC130 has no hope.

Is the USA now using AC 130 gunship in Mosul?

Thanks .Maybe ISIS has SAMs

Try MANPADing your way out of this one…. I am only surprised why they didn’t “reanimate” them 4 years earlier, it’s such a useful tool for returning entrenched jihadists into the soil nutrient cycle. and it’s sure cheaper and safer to use than a MiG….

Low mobility. And they probably don’t have too many of them.