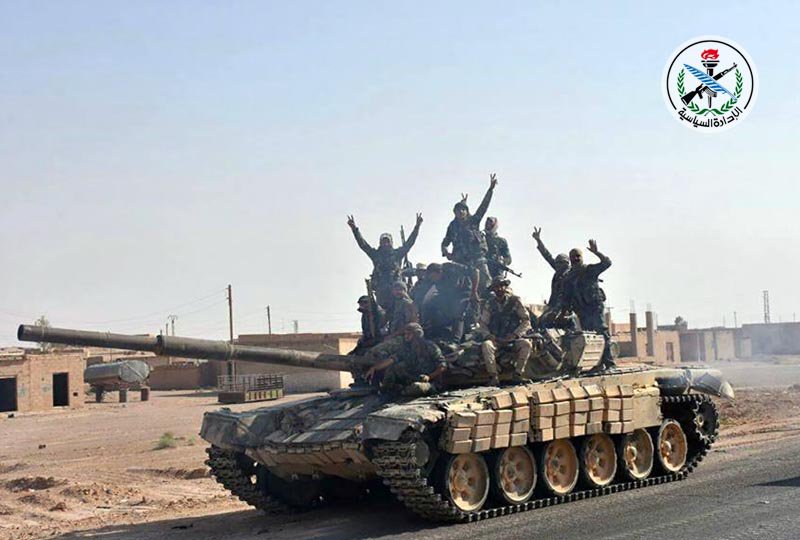 On Friday, the Syrian Arab Army (SAA) and its allies captured Halbiy, Zalbiya and Qasabi villages in the northwestern Deir Ezzor countryside, according to the Hezbollah media wing in Syria. Government troops also entered the nearby villages of Ma’dan ‘Atiq.

The SAA is now only 4km away from the strategic Madan town located on the administrative border between Raqqa and Deir Ezzor governorate. 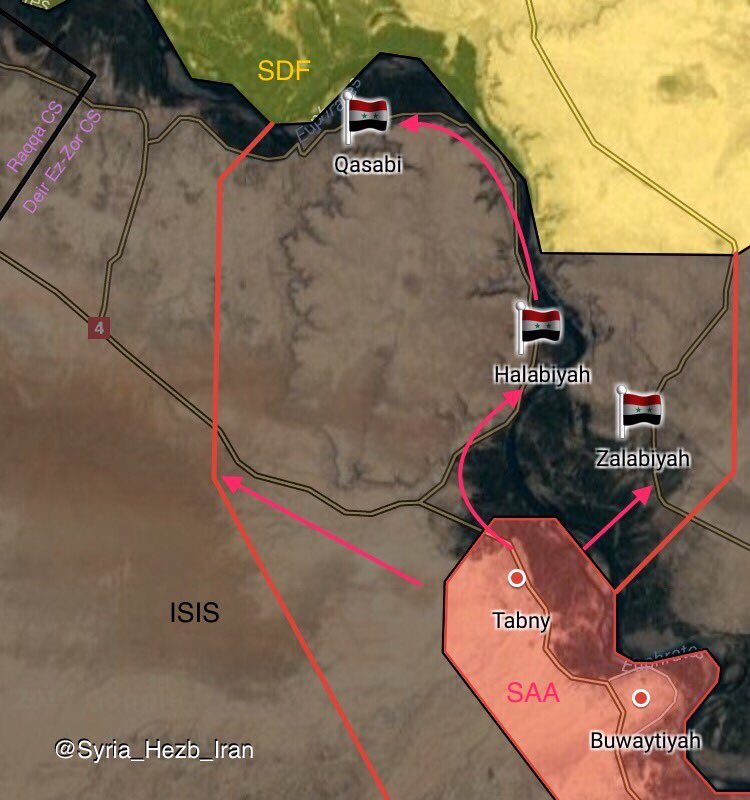 The aim of the SAA military operation in the northwestern Deir Ezzor countryside is to capture the Raqqa-Deir Ezzor highway. Once the highway is captured it will be used as a safe road to Deir Ezzor city. The advance also slows down a possible redeployment of the SDF from Raqqa to Deir Ezzor province.

In a separated development, the US-backed Syrian Democratic Forces (SDF) announced that its fighters besieged ISIS units inside Tabiyeh and al-Isba oil fields in the northwestern Deir Ezzor countryside.

According to this official announcemen, the claims that the SDF captured the two oil fields on Thursday were likely false or the SDF was not able to secure the gains. 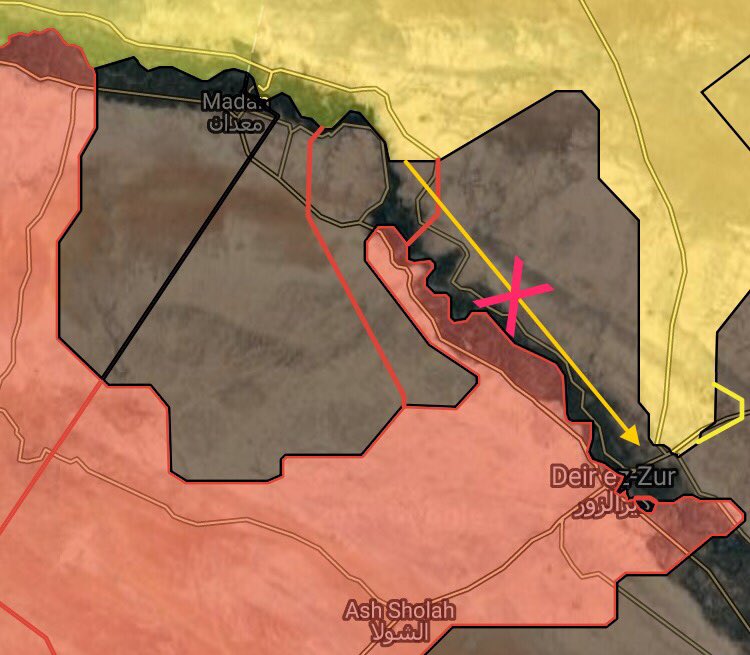 With the SAA in Kusham village south of Tabiyeh oil field, the both forces are in positions to raid and to capture the oil field soon.

Due to the wide advance by both the SAA and the SDF, ISIS units are now supposedly under siege in three pockets:

Looks like the Tigers can’t stop once they’re on a roll. :D I am very surprised and can’t quite 100% believe that they even crosses the river and seized a village so quick, right under the noses of Self-Demolition Forces. Very good work.

Good men, the Tigers. But at other front lines good men are working as hard as the Tigers to get the homeland free (incl. allies, russians).

Hide Behind
Reply to  Wahid Algiers

Shows to world the vast difference in charactet and will of those who truly fight for their homeland compared to mercenary interest troop, and those who EMPLOY them. The basest of what we used to call character, hire underlings of even lower caliber. Another term now completely lacking in Israe/US, UAE, and Euro nations is “Honor”. There is no honorable intent by them, no matter the bull crap and sad eyed words of high ideals they feed to the deliberately ignoran? it all boils down to greed and self agrandizement. SELF MADE MEN AND WOMEN WHO ONLY WORSHIP THEIR CREATOR!

Keep up the good work. Soon all you’ll have left to retake is the Golan Heights.

The sdf can do nothing against multiple river crossings, they barely have enough men to fight in two battles at once. But this will change in two weeks as more units come from Iraq and raqqa winds down.

sdf with its false flags/news is being defeated every second …. God bless the russian led coalition

This is good news. However, I consider much more important the oil fields in Omar, for many tactical, economical , and political reasons.

SAA SHOULD CROSS THE RIVER FROM TIBNI AND TAKE THE HIGHWAY ON EASTERN SIDE TO CUT OF SDF FROM USING THAT RQQA DIER ZOR ROAD SDF PUSSY WILL BE SHOCK. DIVERT SDF MIND FROM ADVANCING TO BORDER WITH IRAQ

There won’t be any Kurds coming from Iraq they tried to attack the town of shlo and ran into PMU forces defending their portion of the Sinjar valley.

US is also using another Nasty military jungle tactic: declare an area captured while in reality it is not. Next, they colour the map and send it out to the press. Unfortunately, this has happened few times from SDF forces. Again realizing this as a fact will vindicate Russia MoD when they keep saying that they never observed fighting between the SDF and ISIS. Lest we have to ask ourselves question: how can the Kurds capture all these territories this quick if they are fighting ISIS like SAA is doing? Unfortunately, such tactics has the potential to derail your enemy’s motivation and momentum as they will loose hope pushing that direction and this will inturn give the Kurds enough time to really push forward and capture the area.

Yep Psyc war is pivotal to US strategy, the Media/INFO war largely hamstrung by the presence of the free internet and open source intelligence like South Front

They need that highway junction on the north side of the Euphrates across from Deir Ezzor, the one that the SDF claims to be holding.

Southfront still foolishly believes that the handful of SDF soldiers Zion forced to take up position near DZ are for real. Meanwhile said SDF hasn’t covered its rear and might be in for a surprise.

The 5th Assault corps and the Mechanized 4th bravo for the westward push and good job Issam Izzarheddine masterful plan and good job on the advance at Saqr Island. Please everyone give credit to the main force in the west which are the 5th and 4th along with the SRG, Suhleil is in the east with the tigers there as many elements of these units are split into brigade formations to best utilize their specialties. These are employed by trained and effective modern day armies smaller contained, the US is just learning what others have done for a long time. Syrian Army will like these types of battle formats as they are designed for fast assaults, then other units can take on the defense portion more effectively.

Another river crossing ! and taking Zabayiah ! Cutting the river road on the east shore is great . Is that confirmed or just on the map ?

This map seems a bit crazy, Wikimapia does not even show a Zabayiah located in that area. There seems to be a lot of unconfirmed (dis-info?) reports coming out lately! :)

Wikimapia does not even show a Zabayiah located in that area.

SAA+Iraqi=Russian forces and Russian fighter pilots; you are such an awesome trio; Keep fighting on; We know you have captured 90% already so, you have a bit of work to do! Kick those foreign paid mercenaries/enemy combatants and miltants arses!