On Wednesday, pro-government forces, led by the Syrian Arab Army (SAA) Tiger Forces, captured al-Ba’um area and al-Balout district in the northern and eastern parts of Mayadin city in the southeastern Deir Ezzor countryside, according to pro-government sources.

Syrian warplanes destroyed positions and vehicles of ISIS in Mayadin and al-Muhasan cities and Tyibah, Diban, Boqruss and al-Boleel villages in the southeastern Deir Ezzor countryside. Airstrikes also pounded ISIS in Saqr island east of Deir Ezzor and inside Deir Ezzor city, according to the Syrian Arabic News Agency (SANA).

The SAA will likely fully encircle Deir Ezzor city in the coming days, and launch its assault on ISIS-held districts inside the city. Since 2014, ISIS has captured around 40% of the city, mainly in the southern and eastern parts of it. What about that union Jack bro. U Brittish?

Yep; and I support Syria, Russia, Iran and Hezbollah in this fight.

Sorry about the flag, I tried to get two besides each other, Fk knows hat went wrong.

…. and no, I am not a Mozzie, I am a white, Christian, middle aged bloke that believes in doing and supporting what is right.

You are welcome. I am on the same track supporting Syria, Russia, Iran and Hezbollah and I am white european too.

Just make sure you don’t let me have that “one to many, when there are a few fit birds around” when we go on a night out !!!

PS How the hell do you put those icons in your sentence ?.

uuhh with the icons button

Here is a photo of the Mayadin bridge. I think they will make an amphibious crossing at the North of Mayadin to save time. 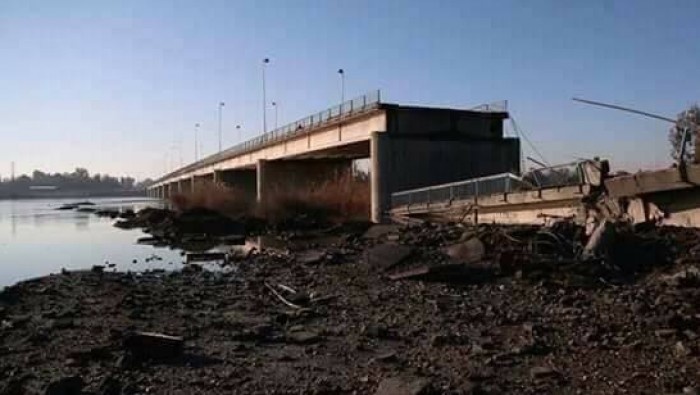 And here is an aerial map of the bridge. 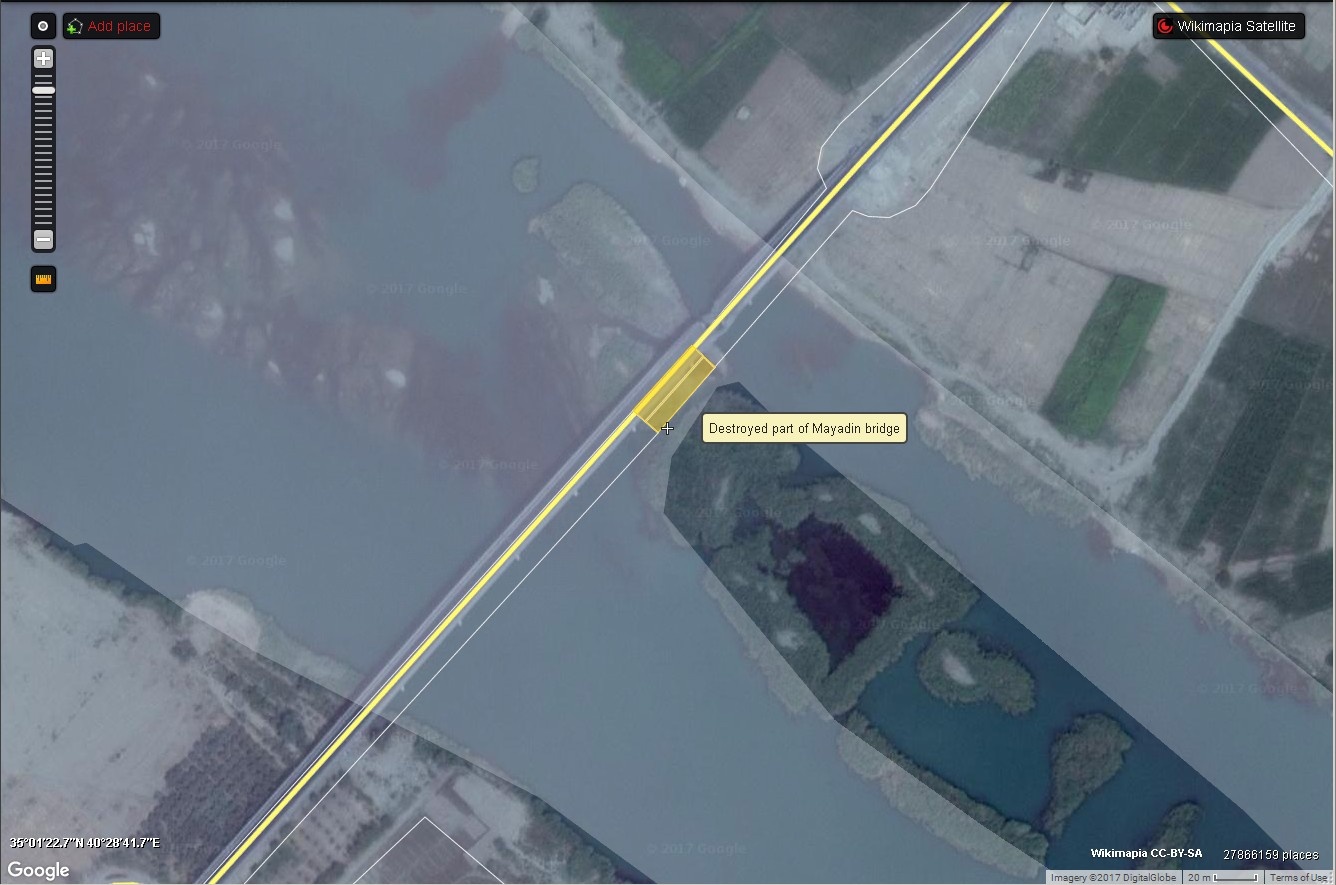 Question is, do they still have spare unused pontoonelements available, which I rather doubt.

You are correct.As of late the reports coming in have been rather contradictory at times.. wonder if it’s by design or pure posturing.. I doubt that SAA will attempt another crossing of Euphrates anytime soon around the Mayadin city.They would be exposed on all sides, and it would be IMO a fools errand.if DZ is any indication Liberating Mayadin will take quite some time and delay the potential use of the bridge if it’s even still there.

You do know that they are already there don’t you ?. North of the oil fields and that is why the SDF haven’t advanced.

I actually don’t Know..I simply based my statement on available reports/ maps on here and other sites. Am sure the maps are accurate only to a certain degree, and if there is a concerted effort by SAA,Russia and allies to maintain a complete blackout of information from these areas then that would explain my lack of knowing.. anyways, if they indeed are, then it won’t be long till everyone else know.. perhaps you could shed some light on the source/ link of your info.

They have sent in special forces (no idea how many) to block the crossing by the SDF. I am not quite sure why they are not publicising it as obviously the Yanks will know, probably the SDF and even ISIS spotters would.

It is mentioned in a couple of articles, but strangely enough “just in passing”.

This, South Front mentioned it as did AMN. It seems to gel with what is happening as well in the maps that we see. I am sorry I do not have the specific links nor the time to find them. Whilst I assume you maybe doubtful of my claim, I am just passing on what I read.

Strange report on wednesday evening of a limited advance into Mayadin city. Strange as SAA reported sunday evening the town was deserted by IS and it was going to be an easy takeover on monday.

Now it is wednesday evening and the city has not been taken at all, only a limited advance.

While I know ass-adophyle commenters here are cheering any positive report on activities of SAA, they seem to be oblivious to the huge discrepancies between SAA reports and reality.

While it is completely up to them, I must say the veracity of SAA reports the last two weeks has been very low and are more propaganda then reality.

SF should be, imo, be a bit more critical on their reporting on SAA, using a bit less rosey propaganda and a bit more fact checking.

No doubt this will not be very well received by commenters, some of whom openly declared to prefer SAA fairytales, but SF is not reporting fairytales, is it?

This report may explain what is happening: https://southfront.org/syria-war-report-october-11-2017-us-backed-forces-negotiate-with-isis-over-raqqah-city/

SF did state in that Sunday article “If reports are true”.
I prefer “This report is unconfirmed”, the same as some of the BS info you post on this site. :D
Dis info is a weapon of war at times, you should learn how to deal with it.

It is propaganda war, you idiot. The syrian media report that the city is deserted and is being stormed so that some of the defenders will panic, thinking they are left behind and the others retreated.

What matters is that progress is being made, if ISIS could stop the SAA from entering the town, they would have done it, it is very important to them. This is where many of their leaders moved to before Raqqa was surrounded.

Dutchie has the glasses of a greater kurdistan on. You can’ t convince him by facts. And a military background he is missing too.

Dear Dutchnational,
First of all, if you read SF on a constant basis, you should know that SF always refers sources of claims and reports about advances/setbacks of any side involved in the conflict. Right now, there is a lack of photo and video evidence from many areas, including al-Mayadin city and a part of Deir Ezzor province where the SDF advances. SF constantly updates info on the situation in these areas aiming to provide a preceise coverage of the ongoing conflict.
Anyone, who opens the article on the alleged ISIS withdrawal from Mayadin (https://southfront.org/isis-withdrew-from-mayadin-city-syrian-army-to-get-full-control-over-it-soon-media/), will find that it directly referes a source of the claims and emphasizes that the report still has to be confirmed.
Secondly, we kindly recommend you to use carefully the word propaganda. An intelligent person should understand the difference between propaganda and an opinion of the author. SouthFront has been repeatedly blamed for being pro-Russian propaganda, anti-Erdogan propaganda, pro-Trump propaganda, anti-Russian propaganda, pro-Iranian propaganda etc. In reality, SouthFront provides real facts and points of view of the project’s participants.﻿
Sincerely yours,
SF Team

1000 fighters of the Al-Ahd brigade came in they are an (ISIS) PMC recruited by the US as most are Uzbek,Tajik Azerbaijan, etc. now learn how to source these things amateur.

ISIS is putting up a fight!!! No fault there!!

The Information I have is that US coalition has steadied Kurds and Coalition snipers all with heavy weapons (in collaboration with ISIS) on the north side of Euphrates basically determined that SAA/Russia will not take any oil field. Any attempt to cross will result in a very large casualty on their side. Russia won’t make this mistake the second time and option will be to completely carpet bomb every place they intent to advance on and use maximum force to obliterate any enemy standing on the way. I was told the weapons for such action has already been lined up.