On November 2, the Syrian Arab Army (SAA) artillery and rocket launchers shelled positions of Jaysh al-Izza and Horas al-Din in the towns of Murak, al-Lataminah, Lahaya, Maarkaba in the northern Hama countryside, according to the Shame FM radio station. The two groups were reportedly attempting to build new fortifications.

Later, radical militants began massing their troops in the southeastern Idlib countryside, which provoked a fierce response by the SAA.

“Army forces observed the militants as they deployed additional troops, weapons and ammunition in the towns and villages of Jarjnaz, al-Teh, Sukayk and al-Tamanah in the southeastern Idlib countryside, we engaged them with artillery and rockets, which led to the destruction of several positions and vehicles of the militants and the killing and wounding of number of them,” a field source told the Syrian radio station.

The source warned from the repeated violations of the Russian-Turkish deconfliction agreement on the governorate of Idlib. According to the source, the SAA is more than ready to launch a large-scale military operation in the region, if the militants continue their hostile behavior.

“The SAA is more than ready to launch a large-scale military operation in the region” and is obvious that the SAA are going to launch it, whem the air defense will be ready.

Most of these towns are located just 2 or 3 km away from the Turkish OB post in the area, a coincidence or a tactic. Those Russian bombs are getting closer and closer to hitting one of these annoying Turkish OB posts, the last Russian bombing run against the terrorists located nearby an OB post, either this one or the one just to the north, was a thermobaric bomb dropped just 250 meters away from the post itself. I joked at the time that the Turkish soldiers there must have not only felt the pressure blast, but the hairs on their arms would have been burning as well.

It happened about 3 or 4 months ago, but there’s also been at least 3 other similar Russian bombings near Turkish OB posts that I’m aware of before that, they even bombed a village that had a Turkish delegation visiting at the time [Latakia I think], which was trying to get the villagers to agree to having a Turkish OB post built there, but the Russians didn’t like that idea and let them know. The Syrialiveuamap has a timeline function that allows you to see where when and by who if you want to take the time to check them all out, or maybe just google it.

Agreed, good info. The only question is if Turkish forces take casualties from SAA shelling or air strikes what happens then ?

No one is going to attack the Turk posts, and not even the Turk proxies that have withdraw their heavy weapons from the buffer zone (a news spoke of more or less 2.500 fighters in withdrawal). The purpose is to isolate, as much as possible, the al Qaeda’s from the others Turk proxies. And what the Turks can do? They can’t use their air force. A full invasion of North Syria? But neither yankees nor anyone had risked that, would the Turks risk?

Will the terrorists continue with their hostil behavior ? OF COURSE, that is what they are paying for by USa-ISrael-NATO (Turkey).

So turkish preservation of rabid chimpanzees doesn’t works at all. Let’s burn them!

My map shows a rough outline of the so-called “buffer zone”, inside which various jihadi gangs freely move and fire heavy weapons into north Hama. The TAF units now deployed there do not enforce the Sochi protocol and the red circles indicate where terrorist groups of JaI, HaD, and HTS were shelled by SAA. Thus the enemy forces inside the Idlib area consist of three groups :

1. The regular Turkish army/TSK deployed not just at the monitoring posts (red triangles) but right across the area building, strengthening and occupying permanent bases with battlegroups to at least company size.
2. The Turkish created ,armed and controlled National Liberation Front, after integrating and re-training those jihadi proxies who invaded and took Afrin and Azaz ( mainly Faylaq-ash-Sham and az-Zenki)
3. HTS and smaller gangs Jaish al-Izza, Haras ad-Din. 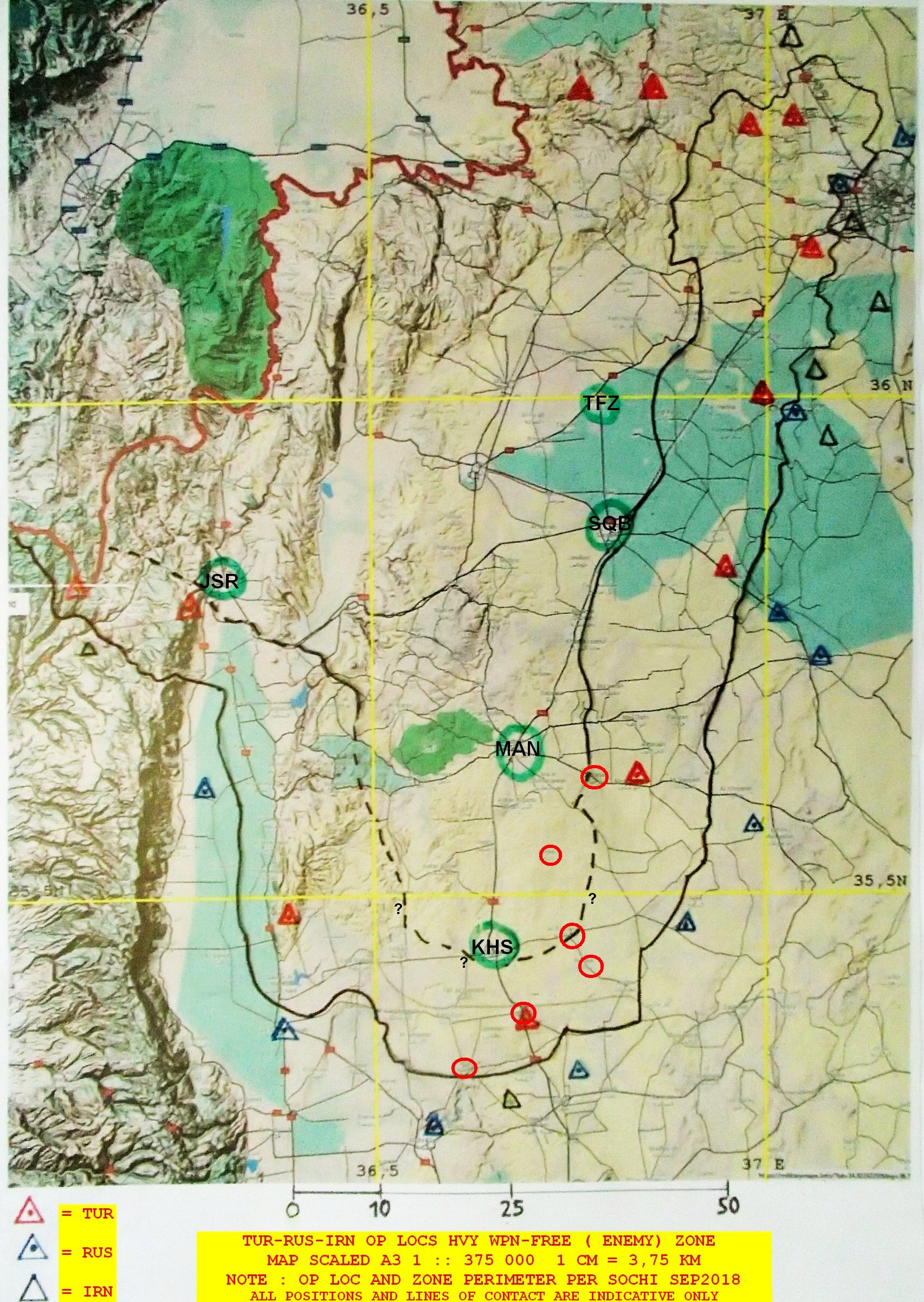 han Sheikhoun and Jisr al-Shughour. Idlib city itself is not militarily important , just symbolic value. No surprise the enemy is consolidating and re-inforcing around these locations.

I think it should be clear by now that Turkey has gradually, and successfully invaded and conquered most of northern Syria with just the Manbij district remaining.

Just invaded the Northwest, to conquer the invasion had to be transformed in permanent occupation and recognized. Abu, what is the meaning of the dark triangles? Russian and Iranian posts

Yes – Turkish=Red, Russian=Blue, Iranian=Black per key bottom left. I regard the enemy invasion and seizure of land and property, plus forced population transfers (Afrin) as conquest same as Israel in Golan Heights.

fire and steel thats the only way those orks deserve