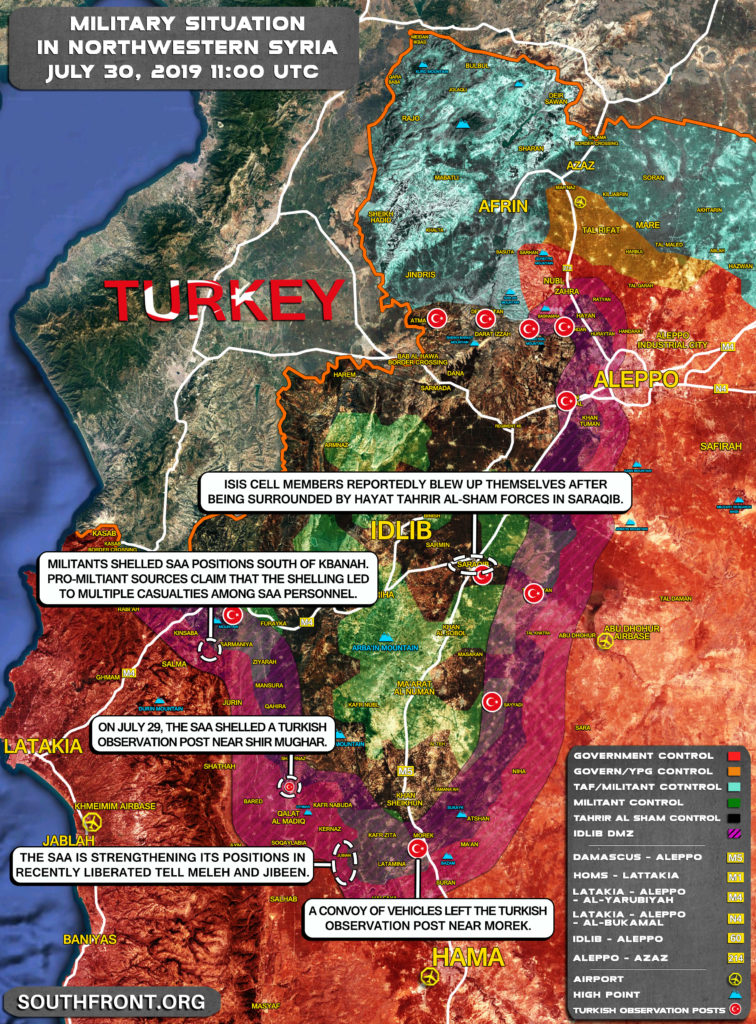 On July 30, the Syrian Arab Army (SAA) and the National Defense Forces renewed their attempts to capture the town of Kbanah from Hayat Tahrir al-Sham (formerly Jabhat al-Nusra, the Syrian branch of al-Qaeda) and other radical militant groups.

Pro-government sources argue that this advance was launched in the framework of the wider effort to pressure militants along the contact line creating a wider buffer zone that should prevent them from shelling civilian areas.

During the past few months, government forces launched several attempts to capture Kbanah, but all of them was repelled by militants.

On July 28 and July 29, the SAA and its allies liberated the villages of Jibeen and Tell Meleh from radical militants.  According to pro-government sources, miltiant groups lost several pieces of military equipment and around a dozen of their members in these clashes.

According to the Russian military, positions of miltiants in the southern part of the de-escalation zone were recently reinforced by 500 members of Hayat Tahrir al-Sham.

Erdogan has invaded Syria. Looks like he plans to hold onto Syrian territory. About time the SAA started “shelling” Turkish “outposts”. I would applaud a lot of dead Turks – everyone that is in Syria! I think it is high time the SAA started shelling US “outposts” as well, just more invaders trying to overthrow the elected government of Syria and spreading death and destruction everywhere they go.

David Parker hold your joy for now. The Syrian government wants the Turks to invade them. The Turks are going after Kurds and President Assad could not be anymore satisfied about it. On top of that fact; His men get to scalp a few Turks whilst they slowly squeeze the Idlib pocket breathless. No harm, no foul amongst border nations here. Dave lear the art of war and the deception in front of you will be seen in another light.

Pretty much. Yes.. Erdogan can’t afford to occupy any Syrian lands. Especially since the Americans will not support them; nor will the Russians. For their part, the Kurds will see the benefit of direct military contact with the Turks. Hoping to inspire potential Kurdish resistance against the Turk authorities insideTurkey itself. The Turks are doomed over the border over the longterm. However, as long as they are there, the Kurds will lose their bargaining position with the Damascus government. For no matter how much the US pressures or supplies them, the Kurds will never be able to govern and or rebuild the lands they take. Too many muslims and too many jihadis.

The SAA may not be taking over much territory right now that’s correct, but they’re purposely turning the whole length of the rebel held safe zone into a totally barren wasteland, there’s a sound logic behind the SAA slow advances and continuous bombardments.