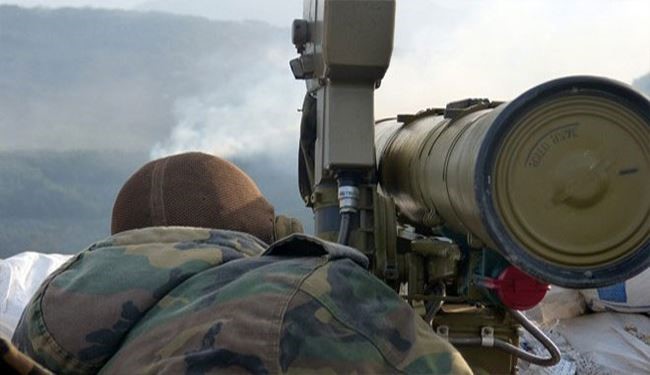 On June 16, the Syrian Arab Army (SAA) shelled several positions of Hay’at Tahrir al-Sham (HTS) and the Free Syrian Army (FSA) around the town of Kinsabba in the northern Lattakia countryside, according to the Syrian Observatory for Human Rights (SOHR).

Syrian oppositions sources also reported that the SAA Commandos destroyed a vehicle of the Turkish-backed National Front for Liberation (NFL) in the village of Tuffahiyeh in northern Lattakia with a Kornet ATGM. One fighter of the NFL was reportedly killed and several others were injured in the ATGM strike.

Meanwhile, US-backed Jaysh al-Izza announced that its fighters targeted a gathering of the SAA soldiers in the northern Hama countryside with a TOW ATGM. The group claimed that its ATGM strike was a response to the recent attacks of the SAA.

A day earlier militants clashed with the SAA around Kinsabba in a clear violation of the de-escalation zone. Under the Russia-Turkish-Iranian agreement, this area is a part of the ceasefire agreement. So, the SAA and its allies have to respond to any attacks by militants if they want to keep the situation under control.

what did people think was gonna happen? crazy to think/believe that these psychos jihadi jew slaves would wanna stick to any agreements…mindboggling……

You are right! These Arabs seem to be everywhere amongs the headchoppers. Cunts!

The Russians have asked for peace during the world cup. I am almost certain that this is the result of some kind of an attempted Provaction.

Russia’s been bombing both HTS and the FSA, it’s bombed a town with a Turkish delegation visiting that was trying to organize another Turk OB post, and 3 days ago it bombed an area just adjacent to one of Erdogan’s OB posts in western Aleppo’s Governate. Now the SAA are joining in it’s even better. Things may be heating up for Erdogan soon, Turkish soldiers killed in the crossfire would be a bad look at home for him, but a great morale booster for the SAA and the Kurds.

Hope so. Those dirty turds need to go back to erdoganistan.Has the US arrested any of tough- guy Erdogan’s bodyguards yet or does the USA talk tough only to those it can bomb easily?

Shouldn’t the SAA respond only at the places in which it was attacked? I know the Turkish-backed rats attacked the SAA some days ago and they responded, but now they should respond in Northern Hama, not in Latakia.