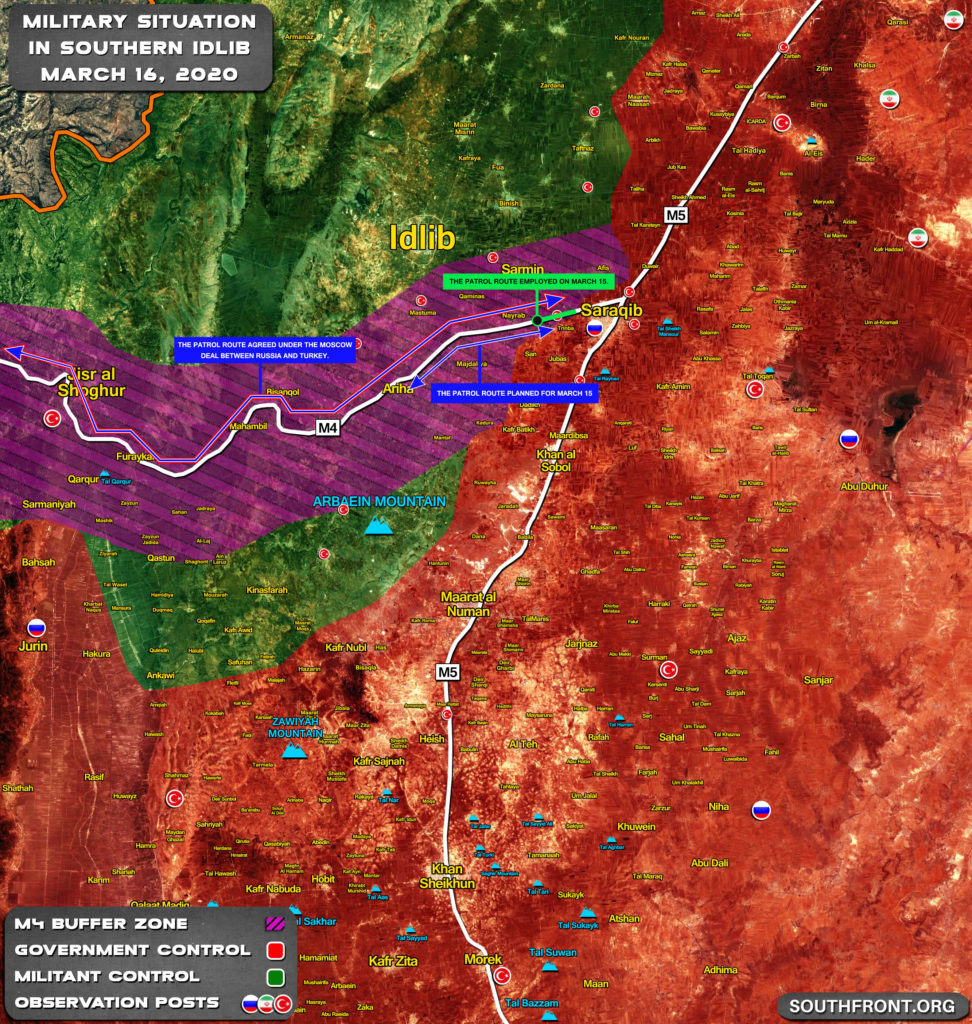 On April 3, the Syrian Arab Army (SAA) shelled militants’ positions in Greater Idlib in response to recent violations of the ceasefire agreement.

According to opposition sources, the shelling targeted positions in the vicinity of the towns of al-Bara, Fatterah and Kansafra in Mount al-Zawiyah in the southern countryside of Idlib.

Radical militants, mainly those operating in the framework of the al-Qaeda-affiliated Wa Harid al-Muminin operations room, carried out several attacks on SAA troops in Greater Idlib over the last few days. These attacks are a violation of the ceasefire brokered by Russia and Turkey on March 5.

These violations are apparently pushing pro-government forces to reinforce their positions in Greater Idlib. According to the UK-based Syrian Observatory for Human Rights (SOHR), fresh reinforcements arrived in the region on April 3 morning.

“The reinforcements were deployed in several axes, including Kafr Nabl, Hizareen, al Fatterah and other axes in Mount al-Zawiyah in southern Idlib,” the monitoring group said in a report.

While the ceasefire in Greater Idlib is largely holding, Turkey is yet to fulfil its commitments under the March 5 agreement and reopen the M4 highway. This could lead to a new military confrontation in the region between the SAA and Turkish forces.

Turkey wouldn’t even be able to remove the militants from the M4, even if it wanted too, I doubt they’re even gonna try, so the SAA might just resume the offensive already

Erdogan is not interested in removing terrorists along M4.It just a time consuming and excuse mechanism to show to the world leader Trump and Macroni that Turkey is on working

So the ceasefire is over and we are going into the round 2 (or is it round 3 or even 4)?

Whichever round it is it should be the final round.

Mustafa Mehmet does not approve of the truthful comments.

Why does the SAA have to deploy forces towards Idlib? I thought most of their troops, especially the special forces, are already deployed there?

Its a matter of words. They replace forces being home for a while. Its not reinforcements as its told. There are none aprt from each time children becomes 18 and has to join.

Green south of M4 quickly retaken along with the South-East bottom corner near Sarmin. SAA pincer at Shoghur. Then to Idlib. Once Idlib city is taken the entire green collapses, like if a tsunami went over it.

Putin with his constant ceasefire prolonging the war in Syria and more death in Syria and nothing has been accomplish. Putin is fool

Loke as if you really gove a fk about assad cia troll! for now there have been less deaths,cia/usa started the crap,are the frgn noobs, not the worlds best leader,fknut!

A lot here and in the rest of the word give a f… about Assad. I am for all there with weapons should be shot right away and the Leaders for them as number one.

TURKEY IS SYMBOL OF TERRORISM. EACH KILLED TURKISH INVADER IN SYRIA = KILLED AQ OR DAESH. Nothing against normal Turkish people who in fact do not support erdogan pig head bitch.

Mustafa mehmet got nothing better to do then down-voting, can’t think of anything to say, coming down with bit of covid-19. You Turks are nearly at 500 confirmed dead, this will put strain on your health service and your fucked economy, still want to be the arrogant Turk there Mustafa.

And nobody else has that influenza ha ha ha.

Russi and their oblast insist in ceasefire everytime they are out of ammo.

Or when they lose their ‘state of art’ air defences to some sub sonic drones.

Does fresh mean real good soldiers ? Not that ones that run away before terrorists.