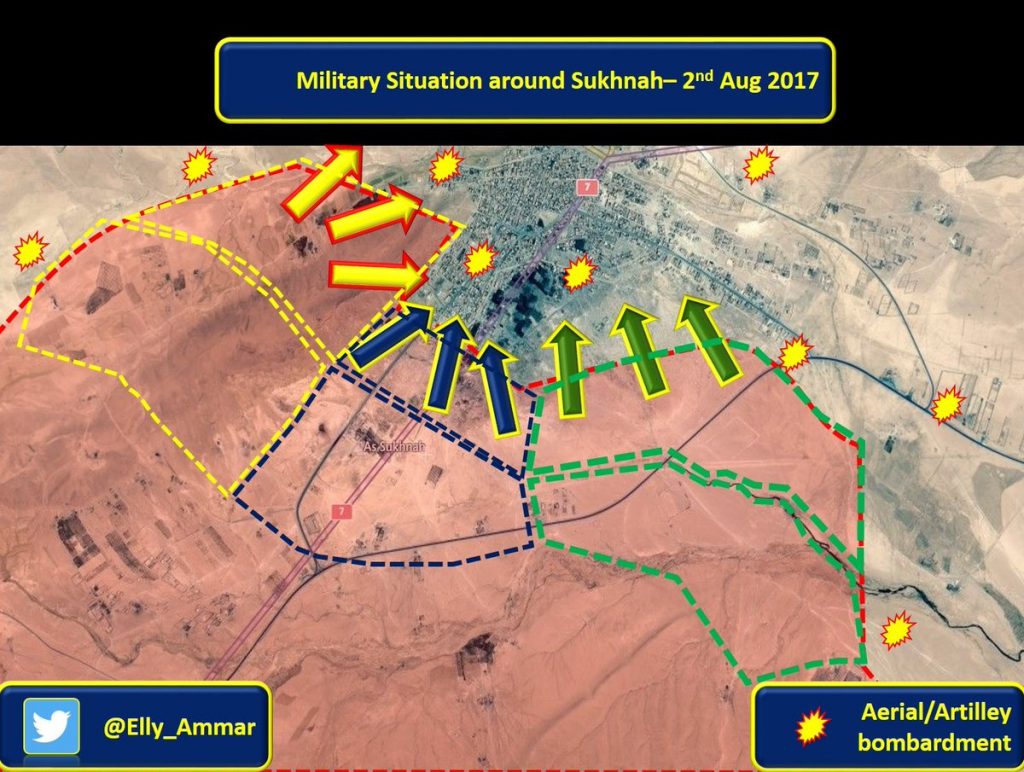 According to pro-government sources, the Syrian Arab Army (SAA) began its offensive on ISIS in the strategic town of Sukhna in the eastern Homs countryside.

The SAA captured the mountain of Tunotur west of Sukhna, allegedly stormed the southwestern entrance of the town and captured several buildings.

From its side, the Syrian Ministry of Defense confirmed that the SAA hadd captured all ISIS fortifications south and west of Sokhna town. 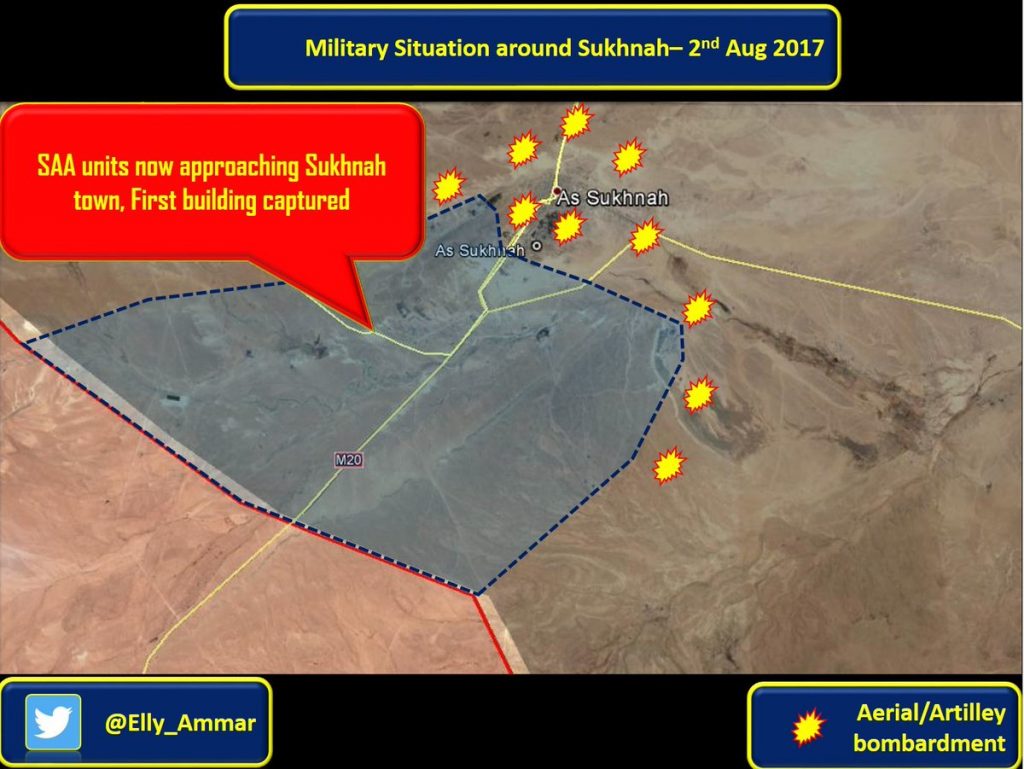 Opposition sources also claimed that Russian and Syrian warplanes launched dozens of air strikes against ISIS in Sukhna and its vicinity. Furthermore, Russian attack helicopters provided close air support to the SAA during its advance.

According to the Syrian media, a majority of the ISIS fighters withdrew from Sukhna last week, but dozens of them decided to stay in the town and try to defend it. Most of these fighters are suicide bombers and snipers.

Experts believe that the SAA will be able to capture Sukhna soon. However, the SAA may suffer notable casualties during this difficult operation.

With a few dozen ISIS troops consisting of snipers and sicide bombers, SAA should take the city easily and be fully aware and on alert of IED left behind.

But the SAA must actually kill as many of those American ISIS scum as possible. Such NATO scum should not be existing in the world.

I would not let them retreat to Deir-ez-Zor.

Agreed, this is when Russian and Syrian air forces are so important in bombing the fuck out of the retreating convoys lol

Sukhna I hope will be easy, but Deir ez Zor will be much tougher. We have to be prepared to be patient, !! and let SAA and Tigers by the east to take their time. Al Bukamal and finally Idlib by the end of the year ….hey guys ! let´s meet in New Year in Siria !!!! Just ca´nt believe it !! USA NATO Terrorists S Arabia and Israel defeated !!!! Wow !!!

Deir Ezzor should be easy, but Maadan will be nightmare for SAA. Therefore, i would bypass the Maadan city for now

i agree DEz will be easy because the SAA already have a foothold there!

maadan probably not. the isis HQ is in Mayadan, south of DEZ city

Yes, and when SAA is about 20-30klm away, time to parachute more troops in, maybe even Syrian, Russian Hezbollah and Iranian. Imagine the PR after the liberation.

Maadan is the forward position of the fortified plateau. Best outflank the rats

Madden is on a bluff on the Euphrates with no lack of visibility for the defences to see forces coming….

Yes, therefore the way to go is to encircle Maadan and let the defences there starve out with no support…..

Or perhaps assault it from the rear? :)))

AT this stage, I don’t see SAA leaving any pockets along the Euphrates. For the simple reason that it would be a headache after the liberation of DeZ. The reason why the Tigers shift their momentum from fast to slow and vice versa is not because of the resistance (ISIS is not well dug in on that front), it is because other units weren’t able to liberate Sukhna in Homs. Once this is done (shortly) and the door is shut, things would move smoother and no point in having small pockets.

A beautiful operation, in a few hours the SAA will cut ISIS reinforcements from the road to Taibah, while they have already secured the M20 highway. This way, the SAA may continue to proceed towards Deir Ezzor. ISIS, Daesh, or the Dodo as I like to think of them is left with two stunningly bad options, retreat, and abandon the city to the SAA, or fight, become surrounded, while SAA continues to advance along the m20.

I would like to see an operation by the SAA in Raqqa province to attack towards Taibah. This would allow for a link up between the SAA forced in the center, along the iraqi border, and euphrates, and would allow for a broad front attack against ISIS forces, that would be difficult to advance. ISIS prefers a concentrated fight, thus the SAA should force them to defend everywhere at once.

I like the SAA advance along the euphrates. It is genius to advance through the desert and then flank ISIS by pocketing them off, and trapping them against the river. I hope this continues.

The pocked in eastern Hama is a complicated issue. Patience may not be an option as the SAA attempts to advance towards deir ezzor, secure the iraqi border, and free up central syria. It seems that there is a roll here for significant help from russian air assets. It is both proximate to their air base and vital for long term Syrian stability.

The cease fire in Idlib is about to come to an end. The SAA should be ready to redeploy forces for a likely imminent offensive, as soon as HTS is able to consolidate its hold on power.

This is the first intelligent comment I have seen you make Alex Black good for you. Stay away from the nuclear issues until you take some science courses.

i have a feeling that once Suknah is liberated that most of the ISIS forces in eastern Hama will leave to defend their most prized assets, the DEz gas and oil fields! The reason i believe this is because after Suknah, the SAA can cut off the roads and pocket them all in and lock them into eastern Hama! So i think ISIS will rush back to DEz because there will be 2 SAA directions heading for DEz. The North along the Euphrates and the East heading from Suknah! I think after the liberation of suknah we will see Eastern Hama fall very quickly! I also liek the fact that any convoys leaving eastern hama will be easy targets!

The roads out Sukhnah are cutted. To Najib oil fiel and Der Mathla. They wil resist until the death in Uqayribat I think.

I think so also, they have left the Hama pocket open deliberatly so fleeing units can be obliterated by airpower, I dont know if they will move from the Hama pocket now though as their likelyhood of survivng the trip is minimal, most likely theu will dig in and die there.

This is logical… But of course any convoys leaving eastern Hama will probably be protected by the US to allow their fraud ISIS mercenaries and operatives to redeploy nearer to Deir Ez-Zor….

They should continue along the Euphrates, the advance is working stunningly well, this will force ISIS to divide its forces and any movement between will be attacked, Sukhna will soon be in SAA hands and the Middle force will advance and maybe even the Southern front.

Definitely SAA will suffer huge casualties due to poor tactical strategy. For ISIS there is no risk to defend the city nor there is benefits to leave the city now.

Stop thinking ISIS is in any great numbers there and tactics are being used by the newly formed Euphrates Hawks , which the old Desert Hawks have been redistributed to other SAA units since a lot of them are former NCO’s giving some much needed leadership those units.

So far I expected that Sukhna would be defended by Daesh, but if it is true that the main forces left, the better for the SAA. A link to Raqqa would at least split the caliphate.

The resulting pocket to the west could be narrowed down sooner or later, even though it would create a huge front line again. Depending on which limitations are posed by the more difficult terrain and other factors, this pocket could be worn out by attrition, as long as (weapons) smugglers won’t make it in.

Taking the height just to the west that overlooks Sukhna is a good step. I doubt SAA is going to rush in without personnel to clear mines and IED’s. Although the danger from ISUS VBIEDS must be dealt with wisely to prevent casualties.

Those Russia terminators I think would be best against the vbieds, I wonder where they are now?? :)))

So youre an expert on tactics? Are u going to say that its “obvious” the SAA have poor tactics? They are winning! Thats a tactic! Winning whilst holding many fronts! People like u are fucking idiots! U have no idea! Lets just leave it at that! NONE!

What poor tactical strategy??? What nonsense u are writing!!!

I hope as many Daesh corpses are laid out in Sukhnah as possible. More Daeshbags slain here means less to harass the long SAA supply route to Deir ez Zor

Not sure what the “experts” mean by expecting a difficult takeover of Sukhnah. It is fairly small, tiny compared to East Aleppo, not much more than 1km across, it is flat and low build. Sukhnah’s main defences were the many ridges and hills surrounding it, and they have now been taken and exert fire control over the entire area. SAA has exerted firm pressure, and carefully left a back door open hoping the scum to run away when there is still time. We’ll see what happens. If it turns out to be a grinder, it will be enough to take half of the town before moving on. In any case this won’t hold SAA much longer.

Good good the Euphrates advanve is working, as expected ISIS is withdrawing to defend the Euphrates valley, if the Syrians and Russians can keep up the air effort many of these convoys may be able to be destroyed in transit before they reach their destination, no doubt an already considered part of the plan and one of the highest profit to SAA forces.