Th army and its allies imposed full control of the towns of al-Qarasi and Qal’ajiyah, as well as the nearby area of Hush Khan Tuman. A day earlier, the SAA reached the towns after capturing Rajm Judran, Khirbat Kharas and Tulul al-Hazmr as well as the town of al-Khalidya.

HTS failed to hold into its positions in the towns, despite receiving large reinforcements from Turkish-backed militants, earlier this week.

The SAA and its allies, including Lebanon’s Hezbollah, are still advancing in the southwestern Aleppo countryside. Their next target is likely the town of Halisah, a stronghold of Turkish-backed militants.

This is getting interesting.
Keeping up the pressure on the rats. Great job SAA. :)

So, according to this map, another Turkish OP has been surrounded? Rashidin 5

It’s not besieged yet. The SAA only controls Rashidin 5, but not Rashidin 4. The post is located between Rashidin 5 and 4.

It looks like the SAA is inching towards the northern part of the M5. Keep it up ??

Great work guys! a Sheik Ahmad push through the centre would be in favour because of the pressure through Saraqib and north at Zitan are pulling alot of reinforcements away from this area. Ahmad is right on the M5 so blocking the route back to Saraqib and also opening an opportunity to take towns from the north of M5. I think starting this push through Huwayr would result in fast losses for these rats

while SF provides reporting on developments as they occur there is little that examines the wider set of conflicts. Perhaps this is impossible??
an analysis of the grand strategy—if one exists, would be helpful. SAA advances r encouraging, however, I wonder if these advances cohere w a larger strategy, militarily and geopolitically. By this I refer to the negative role turkey plays and the ambiguous role displayed by the Kurds…..of course, there be no grand strategy—one suspects that US support for the extremists and the shifting, often puzzling behavior of the USA, Israel, Turkey, etc causes Syrian efforts to be improvised

Some experts have a high confidence that this is about largely undiscovered and massive oil deposits under Idlib, Golan/Daraa and Deir Ezzor – all areas of high focus for jihadist proxies. If only they could break up Syria they could get their hands on all of it. Israel wants US to fight its wars, so behaves like nuisance, hoping to be the last man standing.
Israel, NATO, US have been making moves to ditch Turkey, who got involved dreaming about Idlib Oil riches, so Erdogan feels he is constantly fighting for his, and Turkey’s, life. He may be right. Trump is open about it, “get the oil.” Only Syria does not have massive known deposits. But if geologists have worked out that there are massive deposits in Syria, only they are yet undiscovered, it virtually explains everything.
Iraq of course has been plundered by US companies for over a decade now. Just sayin… 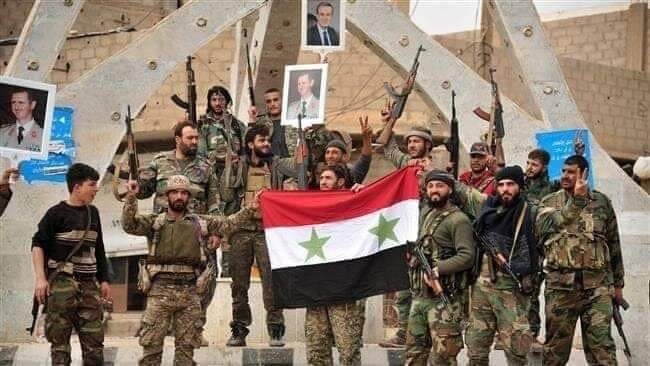