The Syrian Arab Army (SAA) secured the town of Arimah in the northwestern Hama countryside on May 12 following heavy clashes with Hay’at Tahrir al-Sham (HTS).

The army entered the key town a day earlier. However, HTS and its allies launched a series of counter attacks, which was fully repelled few hours ago.

Pro-government sources released several photos showing the bodies of dozens of terrorists, who were killed by the SAA in northwestern Hama. The sources also shared a video of 16 terrorists who were captured by the army.

Arimah is located next to the strategic Shashabo mount, which separates northwestern Hama from western Idlib. The mount, which has some of the highest positions in the region, was used by terrorist groups as a base for rocket attacks on northern Hama and the Syrian coast.

The SAA will likely continue its advance in northwestern Hama in the upcoming few hours. Russian warplanes are now conducting heavy airstrikes on terrorists’ positions in the region.

Incredible progress rapidly made by SAA & allies, widely acknowledged as being possible due to intensive ongoing diplomacy with the civilians from the towns and villages that have now been liberated. Syria is winning on all levels and the anglozionists know it … watch out for some false flags and desperate doubling down from the collapsing hegemon.

its also very important move. It seems Russia got really angry at the latest attack near their base and decided to bring the final solution.

thumbs up SAA……… but we will all have to see how far they can/or are allowed to conquer back from jihadi proxies of Saudi and turkish scum……..the next Question that will be answered shortly, will Turkey invade east syria to get rid of US proxies SDF and again Saudi proxies of the biggest tribe in syria…….and what , if there is, deal or Agreement is there, or will there be between syria and Turkey concearin g east syria once SDF is buried…….. thats the only Option to conquer east syria back from US proxies, without going to all out war with the USA scumbags….and I doubt that US airforce will target regular turkish troops…..

they dont have the guts or the power to do that.

BEIRUT, LEBANON (12:00 P.M.) – The Turkish military has sent a large convoy of reinforcements to the Syrian province of Idlib, today, after a string of jihadist losses at the hands of the Syrian Arab Army (SAA).
According to pro-opposition activists, the Turkish military sent reinforcements from the Hatay Province to the southern countryside of Idlib, where they already have several observation posts.
These Turkish Army reinforcements are meant to bolster their military presence in Idlib and prevent the government forces from expanding further north of Hama’s provincial border.

I sure hope this erdogan idiot knows his priorities…..you cant Dance on 2 weddings…..he better get his act together……

No he does not as he also try to start a war with Greece and Cyprus as well Israel for the gas and oil in Mediterranean not to mention his involvement in the balkan area with the albanians who pushing for a war with Serbia not to mention his support to the ukranians against russia and the question rise is he so important a gas pipe line to russia so they take all this shit from him?

I still think is something in the back of Putins mind none of us know and we will soon see it but is hard to keep believing that when I take all the events that happen and are happening and but them together as all the attacks against their airbase in syria have turkish signature on them.

As for the importance of the the Turk pipeline, possibly when NordStream is operational, there might be a ‘re-adjustment’ of Russian positions, although ally Serbia will use this. The Turks are behind this chaos, but are they really at odds with the US…or are they trying to out-Putin Putin? None of this adds up right in the light it’s presented.

Judging by the way the US is kissing turkeys ass and taking into account that the major investors in turkey beside US is also UK/germany and scandinavian countries and still are I very much doubt it myself. The whole problem between the turks and usa is the harder ertogan has for the khazars in israel.

The operation was announced as a small op to secure and stop attacks coming from Idlib, but seeing the speed it is going the better take the whole of Idlib and it free of terrorist.

And an insurgent mechanism must be initiated which involves the cutting of SDF throats on a considerable and ongoing scale.

Erdogan is a mujahedeen terrorist king.Erdogan is protecting the terrorists which he created.

These captured fighters indicates that they are fully illiterates. If they were educated then they would never touch guns and would never killed their own brothers. Trump uses such people as proxies. Instead of giving education giving them guns to kill own brothers.

Trump is many things, but not warmonger and certainly not a terrorist. He is certainly a spineless leader in the foreign policy and totally beholden certain interest groups that do not have US interest at heart.

That he has significant wealth and a large family does not help his independence either as he can be blackmailed the grand style. Do it as ” we ” say or else. And Trump for all his qualities, is not a martyr that is willing to sacrifice his financial empire and his well being ( or that of his large family) for the sake of the US interest.

I think you are right about Trump. He is a bigot and hate monger from the word go and his past actions of the past 30-40 years show it. His rhetoric long before he was elected was absolutely against the JCPOA (“the worst deal ever”), why people think this does not equate to being a war monger is beyond me, as his opposition had nothing to do with Irans nuclear position…it was Israel’s pissing their pants over Iran’s missile program. This is the real reason the US pulled out, because the US claimed Iran’s missile production violated the JCPOA, which it does not. Trump demanded to renegotiate the deal, with missiles included, which he absolutely knew they would refuse, as that would leave the Iranians completely at Israels mercy. He was and is an Israeli asset from before he decided to run. It was the backing from Adelson that gave him the go ahead. Trumps continual blather about him being wealthy and immune from influence shows he lied from the git go. Go look up how much money that was donated to him (and through his wife). Why does Trump hide his income tax filings? Because it would show where his money comes from and how little he really has and that he is a front for money laundering in the first place. Trump is nothing but a consummate conman/front man for Israel…and they are not a peaceful, nor honorable, nation. Who is the ‘real deep state’ if not Israel, the City of London and the Zionists that back them who have been calling the shots for how long? Trump was really going to bite the hands that feed him? Why isn’t Hillary in jail? Who was really surprised when he attacked Syria after less than 4 months in office? Not me.

Excellent images. May many more Zionist Jihadists than that be killed off in the very near future.

Instead of fighting brother against brother for no clear strategy is a satanic act.

If Erdogan want to leads the Islamic world then he should do homework and use brain instead of using force to create chaos in n neighbouring countries because this will help America and Israel.

Kill all them islamists taught how to headchop by the talmudic terrorists of israel – then go forth and burn to smithereens israel’s loathsome synagogue of satan and its builders.

The zionazis have been reduced to using rabble to fight their wars.

But are they beings speaking, or only animals slaves of the Jews? 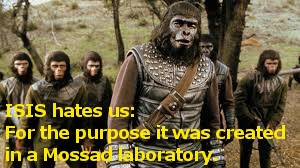 The last jihadi in the video looks saudi to me. But half of them are kids. Surrendering to the SAA is now a better option than fleeing (and being punished) or dying.

What is this!!!!! Taking prisoners for later exchange for SAA troops. No No execute these motherfuckers and period.