Syrian troops, reinforced with new units and backed up by the Russian Aerospace Forces, have managed to stop a large-scale offensive of terrorists of the Islamic State  group in Deir ez-Zor. 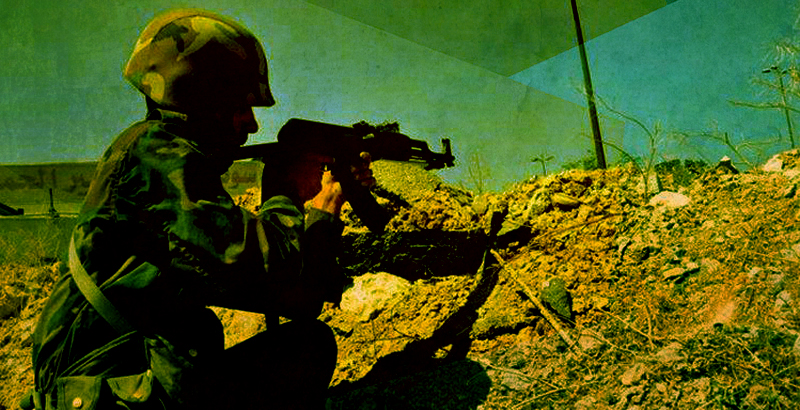 Reinforcements, dispatched by air, and airstrikes of the Russian Aerospace Forces have helped Syrian troops to stop a large-scale offensive of terrorists of the Islamic State (IS) group on a military airfield and a base of the 137th Brigade in Deir ez-Zor, the Izvestiya newspaper reported on Tuesday.

On Monday, it became known that over the weekend formations of the terrorist group suffered heavy losses and were forced to take on the defensive. However, the situation still remains extremely difficult, as besieged troops do not have enough forces to restore a corridor, connecting two parts of the enclave.

The reinforcements, sent to Deir ez-Zor last week, allowed the government forces to stop the IS offensive. Even suicide bombers, who tried to break through the army positions under the cover of a sandstorm, could not help terrorists. Support of the Russian air power, whose aircraft carried out several dozens of sorties per day, also played an important role in this situation.

According to local media, on some days of the last week, the number of aerial raids of the Russian Aerospace Forces on terrorists reached 50 airstrikes per day and more. Reportedly, not only front-line aviation, but also the Tu-22M3 long-range bombers were used during the aerial raids.

As the Russian Defense Ministry reported, on January 30, six Tu-22M3 bombers took off from an airfield, located in Russia, flew over the territory of Iraq and Iran and attacked positions of the IS in Deir ez-Zor province. The aircraft managed to destroy two command points, warehouses with weapons and ammunition, as well as a large number of IS fighters and their military hardware.

According to a plan of the Syrian Command, these airstrikes should prevent terrorists, who still hope to resume attacks on positions of the government forces, from regrouping. As social networks’ activists reported, government troops in Deir ez-Zor fight against not ordinary IS fighters, but against choicest units of fanatics, consisting mainly of foreigners, who are used only for the most important operations, such as surprise raids and breaking through an enemy’s front. Reportedly, these units managed to recapture Palmyra in December of the last year.

It is believed that foreign terrorists were dispatched to Deir ez-Zor from Mosul, when IS leaders understood that their self-proclaimed capital in Iraq is doomed. Capture of Deir ez-Zor and its rich oil fields would allow terrorists to retain its influence in large parts of Syria and Iraq.

Meanwhile, the Syrian Command tries to accumulate enough forces for an offensive of government troops that would allow to restore integrity of the enclave. For this reason, reinforcements continue to be sent to Deir ez-Zor. Now, mainly helicopters, which are based at an airport in Qamishli, are used for this purpose. In addition, transport planes regularly drop containers with foodstuffs and medicine to defending units.

As an advisor to the Director of the Russian Institute for Strategic Studies, Elena Suponina, told Izvestiya, it is still very far until the final victory over terrorists.

“The war will drag on and result in new attacks and terrorist acts outside Syria,” Suponina said.

50 airstrikes per day for the RuAF to save the guys in Deir EzZor. In the mean time, here’s what the heroes in the coalition (CJTF-OIR) have been contributing to defeat Daesh there:

Yes – while the besieged SAA and allied forces are fighting off suicide bombers and repelling attacks on the 137th and the airport FROM HUNDREDS OF ISIS HEAD-CHOPPERS, a coalition of the mighty spent hundreds of thousands of dollars blowing up 10 oil drums and the ever-threatening oil storage tanks. I guess those f’king losers couldn’t find any actual ISIS targets in Deir EzZor. Funny – they seem pretty damn capable of locating SAA soldiers to kill with airstrikes.

CENTCOM’s CJTF-OIR waterboy is the three-star U.S. general Stephen Townsend. Worse yet, his two-star underling – USAF Gen. Scott Kindsvater, got his current job and second star last August. He’s operations and intelligence, so one of his first ‘successes’ was to kill a hundred SAA defending Deir EzZor. He knows the deal – he was a damn F-15 command pilot.

OK – accidents happen. Maybe it actually was an honest mistake. So it kind of seems like the bastard would, you know, try and make it up to the Syrians. Like help them kill ISIS attacking their base. That would kind of show you had a little remorse for killing their troops. But if you read the strike reports for the last month or two, you’ll see the USAF (and assorted tag-alongs) have done almost nothing but destroy oil wellheads and oil stills. This ‘strategy’ is suppose to weaken ISIS by diminishing their supplies of fuel. But since ISIS has Deir EzZor surrounded (and not the other way around), they can bring in all the fuel they need from somewhere else. In the mean time, the besieged residents of Deir EzZor don’t even have enough diesel to pump fresh water into the city. Why? Because the only place they can get it is from ISIS, and the USAF is bombing all their stills. I can’t say if that’s intentional to punish the people of Deir EzZor for being government loyalists, or if the OIR knucleheads intelligence sucks that bad that they really think they are making a dent in ISIS’s capabilities and are too stupid or blind to realize that they are not.

Bombing oil drums? Do any of you old-timers out there remember when the US Navy and Air Force were bombing intersections of dirt roads in the middle of nowhere in Vietnam? This ‘oil wellhead’ BS smells almost identical. OIR must do this just to have something on their PowerPoint slides for the briefings. So I’ll cut them some slack, because numbers on PowerPoint slides is how you keep your job and get promoted. But they are going out of their way to avoid doing their primary job of killing ISIS.

If OIR intel sucks so bad that they can’t find ISIS, then Kindsvater should put a damn chopper down on the Deir EzZor airfield and waddle his fat ass over to the SAA commander. They can point out the f’king ISIS troops running around to the general in case he doesn’t know what they look like. Then get those God damn B-52 bomb trucks in the air and start picking off head-choppers with our overpriced JDAMs instead of wasting them on oil wellheads for Halliburton’s future profits. Lift the f’king siege on Deir EzZor so 95,000 people can eat, have clean water and get medical care.

If Townsend and Kindsvater are just following CENTCOM orders to avoid killing ISIS around Deir EzZor, then they both need to Google ‘Misprision of Treason’ and lawyer the f’k up!

I think on prior strikes, however, JCB’s and ports-potties were also hit.

The JSOC kill team will probably be landing on my roof tonight to put a bullet in my skull. I’ll go out knowing that I wasn’t the only one pissed off at the worthless CENTCOM cucks. Thanks, goingbrokes!

Mobility is the the key. Go to motel room and use your fake ID. Do not use your credit card, only cash! This may confuse CENTCOM. Only crowded local bar is taken out, no casualties reported! :)

You are very welcome!

Syria, Russia and their allies need to immediately liberate Palmyra with 100Km buffer zone then that will reduce tension on Deir Ezzor. Otherwise government will loose precious lives along with Deir Ezzor and too many military equipments to ISIS. Government just need additional 5000 troops with some 500 ATGMs, 1000 technicals, 500 MLRS and 500 military advisers from Syria to support the existent SAA and allies troops in the West Palmyra.

Get em Russia! I’m loving me some TU22M3.Russia has more then 2 bombers?!I Stay strong against the Devil , Deir ez Zor. Mad respect to the true defenders of freedom over there.The men on the ground not that pus Assad