The Syrian Armed Forces and the Russian Aerospace Forces have launched a new series of joint attacks on terrorists in the two major regions in southern Aleppo. As result, terrorists suffered heavy losses. 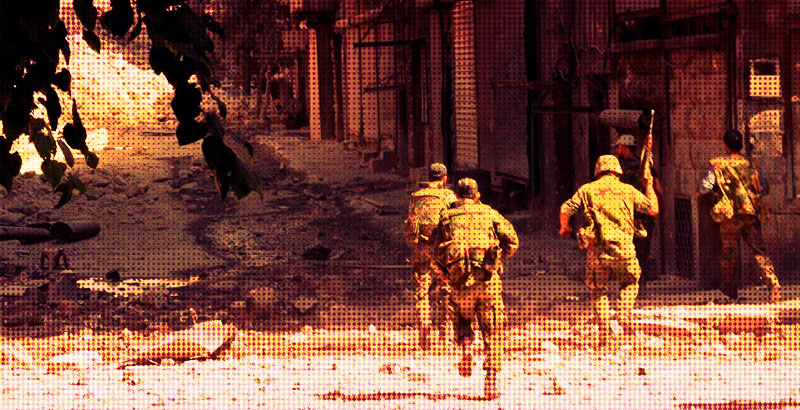 A series of joint attacks was launched by the Syrian Army and the Russian Aerospace Forces in the two major regions in southern Aleppo. As result, a number of terrorists was killed and their military hardware was destroyed.

Terrorists-held areas in Sheikh Saeed district in the southern part of the city of Aleppo were struck by Russian fighter jets that allowed Syrian troops to attack terrorists’ strongholds, and to advance in the district. Jaish al-Fatah terrorists were pushed back from their positions in the area of Sheikh Saeed by Syrian soldiers.

Meanwhile, the Russian Aerospace Forces also launched an attack on a terrorist-held missile base in Khan Touman in southern Aleppo. As result, the base was demolished.

According to earlier today’s reports, the Syrian Army and its Palestinian allies hit positions of the Jaish al-Fatah in the northern outskirts of the city of Aleppo. As result, defense abilities of terrorists were weakened by heavy fire and continued attacks.

Jaish al-Fatah’s strongholds in al-Bakarah, Qweijeh and Jandoul square were attacked by the government troops. As result, terrorists stayed behind their defense lines without any significant movement on the battlefield.

At the same time, fresh attacks on Jaish al-Fatah’s positions along a road to Jandoul were launched by the Syrian Army and the Liwa al-Quds group, which has control over Jandoul square, in order to prevent sending of new terrorists and ammunition to Jandoul.

Good luck keeping your new base in Syria, you’ll be broke in a couple of years and it will have NATO flags. Crime doesn’t pay, not even for Putler.

Your terrorists are done.

You do not get to decide who is a Terrorist. At least the NATO countries are not cowards and take off their insignias…..looks like you are the one supporting Terrorists. Try to think before you post. Concentrate, I know you can do it!

Terrorists are those who behead 12-year old children. Deciding isn’t that hard, is it?

Actually he does! Anyone can decide as its a mere matter of opinion and that is fact. As the old saying goes one mans terrorist is another’s freedom fighter! US troops wear no insignia in Syria if they do its YPG. British troops wear no insignia in Syria, nor do the Norgies! All three NATO members. So your arguments are simply not valid. Less emotion would allow you to clearly see the error in your thinking.

We win on ground, you swear on internet :-) As simple as that, loser

Moscow has never won a war fighting alone. What have you won? Territory that nobody recognizes? Little Putin’s imperialism is costing you dearly and further isolating what could be a decent country. Red Square Maidan is coming despite Putin’s new declarations to shoot protestors. Then maybe freedom will return to Moscovy.

Crime does not pay , so could you explain the US use of jihadists Al Qaeda, “moderates” to wage an illegal war on a Sovereign nation . This “humanitarian intervention” over supposed government crimes has resulted in 5 years of hell for Syrians . Using forces of darkness yields no LIGHT . The end does not justify the means. Russia and Syria have been allies for over 30 years. Why is the US surprised that her ally would come to her aid. The US is not the god of this planet , they have no right to be demanding a change of government.

Your sugar daddy USA and his mistresses in NATO are already broke :-)

Well done SAA and Hezbollah. You are the pride of the free world. Kill all the terrorists.

No more games with the lying bastards in the United States. They NEVER deal in good faith.