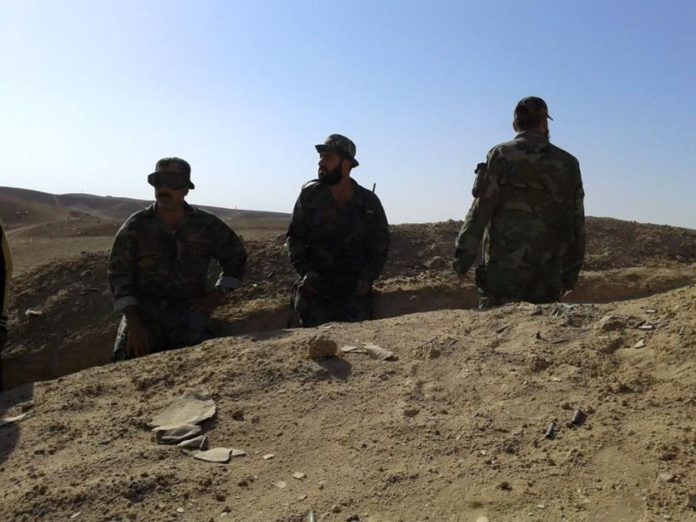 AlMasdarNews reports: The Islamic State of Iraq and Al-Sham (ISIS) launched another powerful assault at the Deir Ezzor Airport on Sunday, targeting the southern gates of this strategic military installation.

ISIS began the assault by launching two different attacks from two different axes, striking the Syrian Arab Army’s defenses at both the Al-Jafra Farms and southern perimeter of the Deir Ezzor Military Airport.

According to a military source at the Deir Ezzor Airport, the Syrian Arab Army quickly repelled the assault at the Al-Jafra Farms after destroying an armed bulldozer and BMP tank with their anti-tank guided missiles (ATGM).

The military source added that the Syrian Armed Forces engaged the Islamic State terrorists for nearly four hours at the southern perimeter of the airport, killing more than 20 militants during the battle.

This latest attack on Sunday was the terrorist group’s 3rd attempt this week to breach the Syrian Arab Army’s defenses at the Deir Ezzor Military Airport.

One would expect them to throw their reserves at Mosul and mount counterattacks but no…for some reason they want Deir Ezzor as a sunni puppet state.

Deir Ezzor , connected by river to Raqqa , you are right makes the new “Sunnistan” . With SAA currently focused on Aleppo , and Mosul just over the border , Deir Ezzor is a choice plumb for the Wahhabi”s . And then there is that rich oil field just south of it . Not having retaken the mountain overlooking the airport , is weak militarily , and could make it appear to be a soft target . I hope it is quickly reinforced in a big way , because if America just has Raqqa , they can be moved out of Syria , but , if they have both , they have “Sunnistan”

and they have fractured Syria .

After five years trying to destroy Syria using jihadi terrorists has failed now we see Plan “B” actually happening on the ground, that is : Turkish invasion and PERMANENT occupation of northern Aleppo province, creation of Kurdistan Rojava puppet “state” backed by NATO “safe haven “status east of Euphrates in Hasakah province, creation of Sunnistan “buffer” straddling Syria/Iraq east of Euphrates. Unless and until Syria can regain control of all territory north of Aleppo and the three dams Tishrin, Abqa, al-Ba’ath , plus Raqqa and Euphrates down to Deir ez Zour, then the break-up of the nation-state will be the result. The Turks invaded Cyprus in 1974, the Israelis annexed the Golan in 1980 – both are still there, their strategy is to create “facts on the ground ” and then defy anyone to try and shift them, So far this has worked, no-one dares attack Israel on behalf of the Palestinians, no one dares or will attack Turkey on behalf of the Syrians. Syria is being dis-membered right now, so much for UN statements of territorial integrity.

Right now yes, but isis and al Nursa will fall, Assad wont stop the SAA will continue to fight! They move up north the Kurdish will accept or fall and turkey has to make a call fight against russia and assad or leave the territory of syria! they will leave, all they want is no kurdistan!

Yes K the separate Islamic terrorist groups will fall, and I hope you are right. But Turkey is in NATO and more important for US than some Syrians. When I see the Israelis retreating from Golan and Turks from Cyprus then I will be happy. Meantime there is a difference between what we wish and what actually happens on the ground. The axis of evil countries attacking Syria (US-GB-FR-Saudis-Qatar-Turkey are happy to keep this war going forever because they are not being bombed or killed in their homelands and their arms industries are booming. Beware the new US regime, Trump will expand US support for Israel.

Assad has no money for this and Russia will not support him.

Think You dont know much about kurds. They are not enemies to kurds but to ISIS and its supporters.

Far out. Syria was a part of the ottoman Empire and not united as the Frech Protctorat, which You claim as a stabile construction. But is it. Has it been ?

Many states of today are less than 27 million inhabitants. My remarks for Iraq is same thing. Thats not a country. Look more like 3 to me, where most of the middle should be with the Sunniarabs i Syria.

Your conclusions are totally wrong. Those uprisers are a product of Assad & Baads failore and are not owned byb them. The land is ownws by all living in it.

It has been more like Assads has had som eastern and northern coloni areas as well as poor not in it living in the cities as proletars.

If Syria is partitioned to the Jordan border,….Iran is blocked….Hezbollah. ..isolated. Kurds need a power to carry them….either US or Russia. US will use the Kurds….we all know what happens when Uncle Shlomo moves in. US might have to conflict with Mad Sultan to keep Kurds from being overrun. MIC can arm the Kurds and let each side kill each other for years…

Russia would be the best broker and partner for the arriving Silk Road A deal to run nat gas from Qatar to Turkey could be negotiated with Syria receiving Transit royalties.

Russia and Iran ( probably have decided already)….what the regions near future will Look like. Until Syria looses it’s border in the East and center with Jordan….the Qatar pipeline Will not be a partition grab. If Kurds are allowed to have Raqqa and some Autonomy…with US being their partner, That would be new.. ..yet would be the pre Sykes Pico Kurdistan Erdogan is raging Against. Maybe Russia agrees the Kurds should have Autonomy and then a future nation. Kurds will have to fight for that. …Uncle Shlomo salivating with glee that He Can stay in the mid east and interrupt Silk Roads. It’s the US now….if not them….the F’ing French and English would be screwing everything. Throw in MB and head chopping….and the future looks chaos. …..until the MB is Named the Terrorist reality it is and ended.