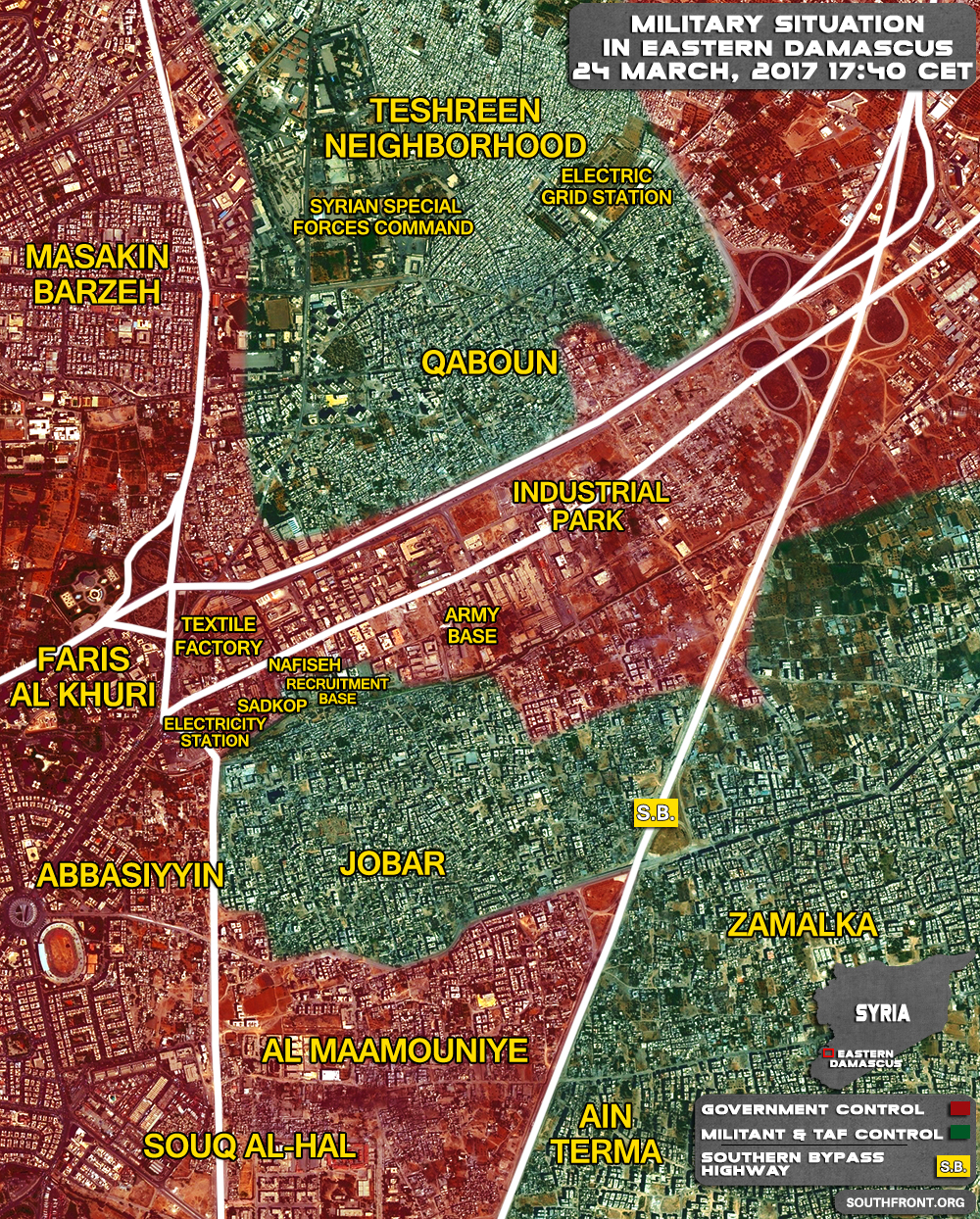 The Syrian Armed Forces recapture the entire factories area north of the embattled Jobar district in the eastern outskirts of Damascus effectively securing all points lost during the jihadist offensive in the area in the past few days.

The 105th Brigade of the Republican Guard and the National Defense Forces (NDF) are currently working on mopping up the buildings and setting up new fortifications. Engineering teams search for potential tunnels and IEDs set by militants.

According to high-ranking reliable sources in the SAA, militant groups lost some 450 fighters since the launch of their offensive in eastern Damascus 5 days ago.

A Russian diplomatic source informed the Lebanese Al-Mayadeen News Channel that those who broke the ceasefire in Damascus countryside await for an unpleasant destiny reminiscent of that of Aleppo.

The government troops continue putting pressure on militants in Qaboun district targeting them with rockets. The Syrian military could consider launching an offensive to capture this strategic district in the coming weeks to prevent further offensive operations by militants deployed there.

A statement by the Syrian Defense Ministry:

Videos of operations in Jobar:

SEXY JOB NOW PUSH AND TAKE MORE OF THEIR TERRITORY!

As expected . The attack in Damascus cant achieve anything in long term . This and Daraa arent fronts where rebels can have success . Even in mid 2015 when the goverment was losing battles everywhere the rebels couldnt have done anything important in Damascus area and they failed at capturing Daraa

It’s a myth that the government was losing. It was pretty clear that everything was at a stalemate. Yes, I’ve been watching the maps since 2012… By the time 2015 rolled around it had ground down to a couple of villages here or there were being traded back and forth all over the place… Not exactly anything to write home about… It’s also untrue that the SAA was breaking apart and demoralized and all that blah blah blah. Here’s the thing: the SAA was never really a truly cohesive army and it will never. It has always been a bunch of political/social/religious divisions, just like the country itself has always been. Even with russian training/influence, these guys just can’t come together…

SAA was never good army as I say . I remember in the first days the rebels captured a lot of equipment almost without a fight .

It’s already pretty clear how it will end at this point: Kurds are gonna take raqqa, and that will be the end of isis in syria(not the end of isis, they will go elsewhere like yemen/africa/etc). Trump will declare winner and pull out, bringing in russia on the kurdish side. This part of the ending is VERY desirable for trump, putin, assad, the kurds, the iranians, and the iraqis. The losers will be “fsa”, erdoghan, and the crazy arabs in saudi land. At that point, erdoghan will also pull out under pressure from both putin and trump… End of “fsa” support there. Assad will continue the tried and true method of “peace or die” approach with whats left of the “fsa”. Once the iraqis are done in mosul they will flood into syria. Both sides already have the agreement and plan setup, all is left is the execution. The kurds will not be allowed to have autonomy, this is wishful thinking. It is not desired by putin, assad, iraqis, turkey, and trump has not signaled any kind of support. Most likely once you see trump pull out, the russians, saa, and iraqi’s will already be highly embedded in kurdish areas with the russians having a “stabilizing” effect. The kurds already have a elevated place in syrian society. They just need to play it cool and not be greedy too soon and they could have a place in syrian government as well.

This is just a rough guess of course. Anything could happen. But it appears that this is already happening.

How long? Who knows. A year or two… Deciding factors are what trump and erdoghan do after the fall of raqqa. If trump declares victory and leaves(highly likely), then things will start moving really fast. If erdoghan is stubborn, will take longer… If pulls out, then things will REALLY start moving REALLY fast. “fsa” will cease to exist overnight without erdoghan…

And what about southern front where israel support rebels, Israel wants Assad out and they want destabilised Syria

Stalemate till the northern area is settled. Then all them saa guys are gonna flood into the south and daraa will be a mini aleppo.

I tend to agree, temporary success on secondary fronts now makes it easier to defeat them later. I only hope that the Syrians didn’t react to these attacks by diverting troops from operations in the east of the country. It’s in the east that the future shape of Syria is being decided. Let’s hope as well that the Russians give the zionist air force a talking to.

they should now cut jobar from zamalka.