The Syrian Arab Army (SAA) and Tribal Forces have reportedly retreated from 3 more villages on the western bank of the Euphrates River under the pressure of ISIS, according to some local sources.

ISIS units reportedly entered in the villages of Subkhah, Huwayjiah,  al-Sharidan and Zur Shama after SAA troops (up to 60, according to some sources) had withdrawn from the area.

Pro-government sources deny these reports and say that an intense fighting is now ongoing in the area of Subkhah.

Earlier this week, the SAA Tiger Forces sent reinforcements to the southern Raqqah in order to assist Tribal Forces and the SAA to repel the ISIS advance.

However, it looks that the  government forces defense is vulnerable in southern Raqqah now because a notable part of the SAA manpower is involved in the ongoing operation against ISIS in the province of Homs. There’s not enough forces (ISIS) to sustain prolonged offensive. My opinion is that this situation will be reversed very soon.

ISIS has been sustaining prolonged offensives against Russian Iranian Syrian Lebanese and Iraqi forces for 5 years straight without any vacation time.
While ISIS is bad, but not discount them when they have proven their ability to fight better the the UK or US or Israeli forces are able to fight.
https://www.infowars.com/

First. ISIS has not fought Russian forces for 5 years. Russia intervened in 2015.
Sinse then ISIS territory was constantly shrinking. Yes, this cornered rat (Daesh) is still dangerous and will bite here and there. But it’s an agony anyway.
But I agree that Jew’s and Anglo Saxons lost their ability to fight, Simply look at combat sports in US/UK – they need athlets with African roots, otherwise there’s no go :)
Irish are still brave thought.

Irish are not anglo saxons. They are (were?) celts.

I have to agree about Irish = Celts. but look at this https://southfront.org/govt-forces-russian-warplanes-eliminate-800-isis-fighters-and-high-number-of-equipment-in-euphrates-river-valley/ and tell me who was right? :)

Why did ISIS not cross the river? Maybe there is a non-aggression pact with SDF!

Yeah you would think if they still have man power enough for this that they would earlier on had done this in Raqqa city and not just to ensure SAA wouldn’t go too fast.

Ever tried swimming with heavy arms? Does not really work for anybody. A few guys swimming supported by a navy of a few rowing boats is not going to defeat the SDF on the north bank.

SAA had as a strategy to envelope SDF positions by attacking IS near the SDF lines. Now IS has to go through the untrained tribal fighters who are not trained in fighting in coordination with heavy weapons, other units, airforce or even in internal coordination. If SAA left them as a sort of garrison without SAA as core force, then SAA has made a large mistake.

Shut up DutchNational!
Its because the USA said not to attack the SDF!
ISIS could attack from the other side of the Euphrates u dumb fuck! Yet they don’t!
hmmmmm I wonder why!

Saleemah Shahin, of the Tiger forces, estimated more then 300 SAA, likely mostly tribal forces, killed in the IS attacks south of the Eupgrates. If correct, proves my point exactly.

If you cannot handle news or comments you do not like, why not dream on in your own phantasyworld.

Ja! Ja! Russian and Syrian AoF should be on this by now. Pathetic to allow for something like this!

Easy to say from the comforts of your armchair and laptop screen buddy . .

Is it just an attempt to divert Tiger forces from Homs/Hama pockets operation, or something else?
May be Daesh intend to break through SAA lines to defend Raqqa from the south?
Anyway, it’s sad to see that the regular SAA combatments are not strong and persistent enough without elitary PMC support…

The whole ISIS now dwells DeZ province including those from Iraq!
But it will end in a trap for them, cutting muslims of Zion from Maskana and make it easier to unsiege DeZ.

Hopefully nashi strategi won’t let too straightforward arabs sticking in besieging the city but rather cross Euphrat river from the north and cut “kurds” from oil fields in the eastern part of the province.

Well looking at past situations, it seems more like a tactical retreat. Not worth dying for some small deserted villages when you can fight behind a descent fortification a bit further back.

Sure, If you make poor planning than run. Always can call tactical retreat

For sure since the Tiger Forces left for eastern Hama there are mainly militias left and I can imagine that they haven’t arranged anything professional and probably didn’t count on this happening. Honestly I don’t think it will mean much in the bigger run.

Sorry, but I am not buying those cheap excuses. Lets face it, SAA poor planning is major obstacle to finish the war quickly. The poor planning and poor intelligent planning is price that soldiers have to pay with his life.

I know, we have some readers who are cowards and can’t swallow the truth and prefer hide the bad information under the carpet and portent like very thing looks good, rather face the truth, recognize this problem and look for solution to fixed.

SAA, will eventually recover but the infantry man on front line will pay the heavy price

Of course someone without insight in the reality would easily jump to that conclusion. There is not much real SAA left and their front lines are enormous. They often just garrison with militia and those are for sure not always well organised, but they don’t represent SAA. I agree that the militias pay the price for not being well organised or trained. Quick fighting is actually what they are doing now to recover as much territory as fast as possible and that is why this could happen. So either it’s slow and well organised and well defended or fast with open defenses on some fronts.

“They often just garrison with militia and those are for sure not always well organised, but they don’t represent SAA.”

this is the cheap excuse, what about talked joe. assad rules over 11 million peoples. he has no problem recruite 100 000 more soldiers and mek from them normal troops. weapons has enough. but assad has fear from too strong army. therefore must die more people then is necessary.

“but assad has fear from too strong army”(c) what is it? Solomosha, some times it is better to keep quiet. That way you’ll look much smarter.

He meant “far from a strong army” I think.

sure! assad has panic fear fromlarge and strong army. he believes only alavites. this is fact. also the owner of desert hawks had to leave syria.

Solomosha… when you call something a “fact” thats an insult to the meaning of this word :)

Since he is democratically elected the people wouldn’t accept forced conscription. Many of the Syrians just want to live in peace and not risk their lives. This isn’t the SDF.

no forced cnscription. only according law. and give benefits for volunteers.

The SDF has no conscription. The Northern Syrian Federal Region has a conscription which is, as any conscription, enforced. That force, the HXP, is not involved in any offensive fighting but is a holding force within the existing SDF held lands. Exception is a small HXP detachment in Raqqah countryside, also as a holding force.

Except for the ones being sent to Raqqah city to be slaughtered without proper army training.

There are no HXP on the Raqqah front, only the already mentioned holding force in the countryside. I admit though reading of a group of new recruits only being trained for three weeks is disquieting. Not as disquieting though as the untrained tribal forces now being slaughtered wholesale by a counterattack of IS.

Hello, from my humble point of view the resistance Axe has to deal with a continous suply of weapons and fifghters from KSA, ISR, US trough JORD .
Basicaly consisting in fast and very cordinated raids that surprises advanced posts or camps that has were preparing defensive trenchees and positions.
This route is the 35 km large corridor arround Tanf . Supplies can be routed by trucks or flown by helicopters… I think 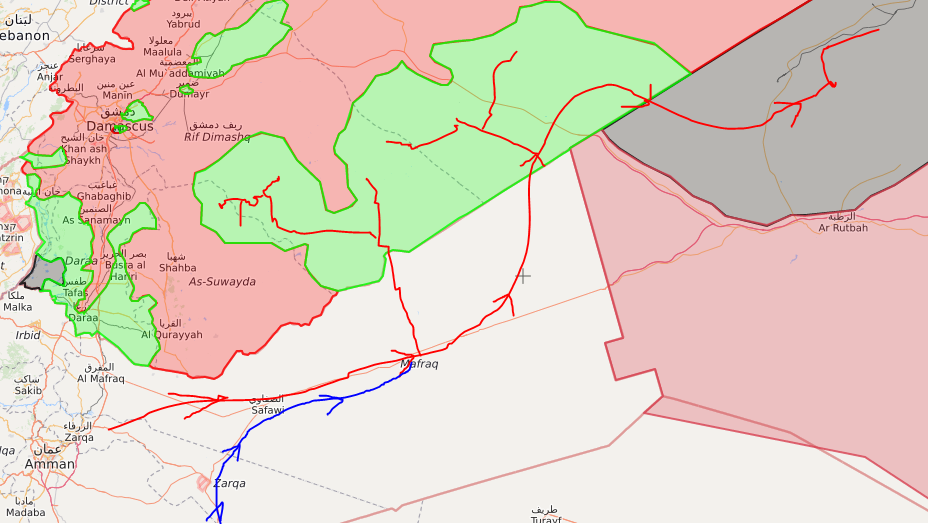 Good point. That is probably why the Iraqi PMU was attacked in that same area last week. They were blocking the corridor. That is also why the US is still in al Tanf.

Remember the Ardennes offensive by Germany in WW2? It caused a huge retreat by the allies, but was the end for Germany

The Syrian government coalition is gaining territory overall every day. Some minor back and forth in a few areas is just the ebb and flow of battle as the Jew world order miscreants lose ground and retreat.

I wish SF would spend a bit more time vetting their sources. This article appears to be based on a tweet by “WorldOnAlert’ which does not source its claims and the SAA has not confirmed what is being claimed. SF should try to avoid aligning itself with fake news such as the recent report of coalition forces attacking the SAA at Kadir. That story too was based on unconfirmed “reports”.

I like it, let the ISIS send their best units into the area, cut them off at the junction, exterminate the roaches by the river bank, and on to ma’adan. Also, now that the central pocket is gone, a lot of troops are going to come by to visit the savages. This should free up 2-3k troops. I wonder when the SAA will start sharing the beheaded ISIS fighter photos. I would like to see the 4th armor develop into the last ISIS pocket in homs, once those savages are gone, this will free up a few more thousand troops for the Deir Ezzor operation. the 800 battalion should develop in the direction of m20 triangle with the Taybah bypass. taking this road will substantially decrease ISIS mobility in the region. Then the SAA, should consolidate and attack south, which will allow forces near the t2 to open another front towards deir ezzor.

FUBAR!
Tigrs and Tribesmen were only 40 kms from DZ city, on a major roll, getting ready to take Madan and continue to DZ, with the river protecting their eastern flank.
Then, SDF expressed annoyance at saa being south of Raqqa, and over next couple of days, Tigrs were re-positioned to Hama in an obvious manner, announcing to everyone that Raqqa positions were left vulnerable and undermanned.
Only a week later, dash hits heavy, and steam rolls saa pushing them 20 km back, while inflicting 100’s of kia. Majority of casualties are Al-Bouhamad’s Tribesmen, who may consider these developments a back stab…
What kind of a confused game is ru playing?

That’s war buddy. You gain ground in one area and lose some in another. The allied armies had the same problems during the invasion of Europe, especially during the Ardennes offensive by the Germans, but the overall momentum of the SAA gains has not been stopped. It’s only a matter of time . .