Few minutes ago the Syrian army, the National Defense Forces (NDF) and Hezbollah recaptured the Al-Assad Neighborhood of Aleppo city from the al-Nusra(Al-Qaeda)-led militant alliance ‘Jaish al-Fatah’, according to loyalist media outlets. Pro-militant sources say that the ‘opposition’ faced a stiff pressure in the area.

If reports about the liberation of Al-Assad are confirmed, this will mean that Al-Nusra and its ‘moderate allies’ lost almost all areas that they have gained since the start of offensive to break the Aleppo siege.

Clashes are also ongoing in the 1070 Apartment Project. 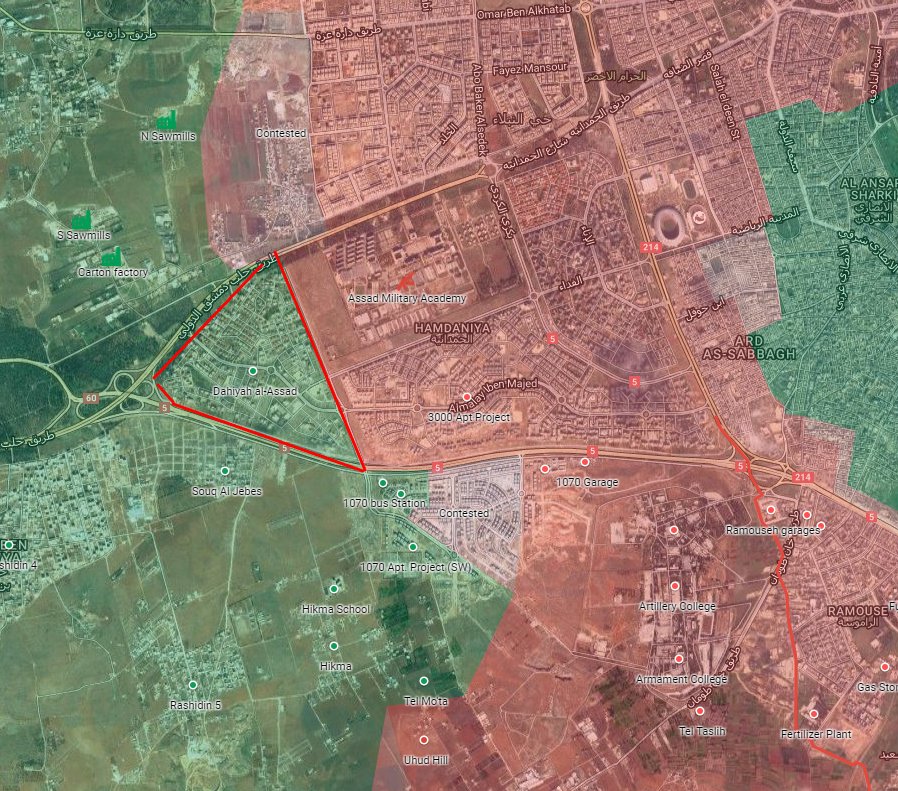 Once the eastren and westren Ghuata is taken I give it another three months from that time on and the terrorists in all areas will be defeated. Hope all the Refugees can then go home and once again build their own land…

You’d be lucky. 3 months? You’re having a laugh.

Given the UK and US support for the terroists, I am guessing that it may take just a bit longer.

Wait whahhabi scum wait when we are done in Syria we will free kurdistan from this shit!!!

Thanks for the meme +1, suits the context excellently

What is the total size of the force actually attacking western Aleppo (as opposed to the force guarding the perimeter from Jihadists trying to raise the siege)?

If the SAA, Hezbollah, IRGC, and other militia have even 20,000 troops and can if they can rotate their troops, that the defenders numbering less than 10,000 could experience a sudden collapse. I know that the Russians gained valuable experience from their two wars in Chechnya in siege tactics and must have passed along their best practices.

The Al Nusra offensive involved 20 MTBs and hundreds of rockets, SAA is hardly ever able to concentrate this type of force, I strongly suspect SAA is outnumbered outside Aleppo and near-parity vis a vis the pocket. It is an extra-ordinary effort to achieve the cauldron at all.

That is a wet dream…the rear HQ for the terrorist was obliterated and their 2000 troops came straight from Jordan and Israel. The ones in Aleppo and the ones to the west of Aleppo are a spent bunch ….20 tanks ?? A fantasy !! SAA outnumbered ?? That is pro US State Dpt trolling !! “Extra-Ordinary effort to achive the cauldron at all” ?? = English as a third language ?? That phrase makes NO SENSE !!

The SAA have hundreds of tanks, what are you talking about?

Just because the terrorists manage to gather a dozen or two half-working tanks with useless crews … so what? What have they achieved exactly?

Their offensive will stall and when the Kuznetsov naval group arrives there will be a few salvos of cruise missiles to seal the deal, hopefully. Big freaking whoop.

This offensive is just to give some hope to the ones trapped inside so they don’t surrender.

Its more complicated and way more organized. The Saudi’s buy weapons for their proxy militants – they just bough batch of T-55s in Bulgaria recently – and these are shipped via Turkey. Where Turkish military engineers do assessment and maintenance work, but Turkish engineers also work inside Syria repairing captured armor and instructing crews inside militant territory. The media image of bands of citizen ‘rebels’ with only captured SAA small arms is false and misleading. The real militants in offensives are foreign proxy battalions and are very well armed and supplied by foreign states with foreign intelligence and military assistance rooms to coordinate their actions and offensives. Because SAA use Soviet era weapons, US/Saudi’s can supply their proxies with Ukrainian and Bulgarian sourced weapon stocks and it doesn’t appear as big influx of new weapons pouring into country, as using same Soviet era designs. This why it is so frustrating for SAA and they have many setbacks – for all their own limitations they are fighting a multi headed enemy.

Yes, something along these lines, basically, it’s a very tough job for SAA, the overall balance of firepower seems against them, if they had significant superiority, the pocket could have been absorbed long ago, it was closed late in the summer.

I only wonder if the terrorists are allowed to take 1070 without any civilians in it then the Syrian and Russian air forces could wipe that slate clean. . .

It was just 2000 as stated by different sources !! Just a straw grasping maneuver of the Terrs… Their real objective was to show they still are a viable force.

Just let a lot of terrorists into the 1070 project then surround them and allow them to surender. . . Or not. . .

Uh !! Better start thinking about Plan C for the gang at th US State Dpt…. Or is it Plan D ??