Early on November 24, the Syrian Arab Army (SAA) resumed its ground operation in southeast Idlib, launching a fierce attack on the town of Misherfah.

Army units stormed the town within a few hours and managed to fully secure it following heavy clashes with al-Qaeda-affiliated Hay’at Tahrir al-Sham (HTS) and the Turkish-Backed National Front for Liberation (NFL). HTS and the NFL launched a counter-attack to recapture the town. However, the attempt failed, with the two groups sustaining more losses.

Several militants of HTS and the NFL were reportedly killed or injured while attempting to hold onto their positions in Misherfah.

Earlier this week, the SAA stormed the town. However, a counter-attack by HTS and the NFL forced army units to withdraw within a few hours.

The SAA may advance further in southeast Idlib in the upcoming few hours. Russian and Syrian warplanes are already conducting airstrikes on several towns in the region. 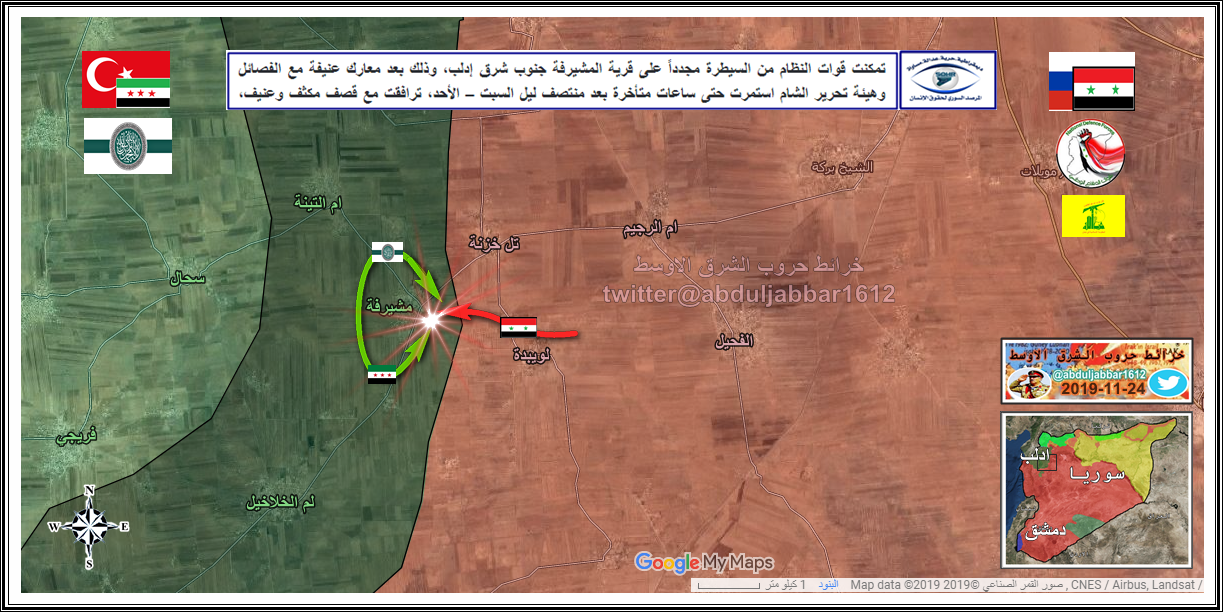 Hezbollah is not participating in the battles of idlib.

Syrialiveuamap now shows the village of Umm Al Khalakhil is also under SAA control, so that massive bombardment yesterday is already showing some good dividends, and since there’s another even more massive bombardment taking place right now in south central Idlib, does it possibly mean we might hopefully get some more good news tomorrow, fingers crossed it does.
Russia gives Erdogan a tongue lashing a few days ago and yesterday Assad spanked his butt, so I wonder if Erdogan’s finally getting the message yet, don’t upset Putin by using foul language, LOL.