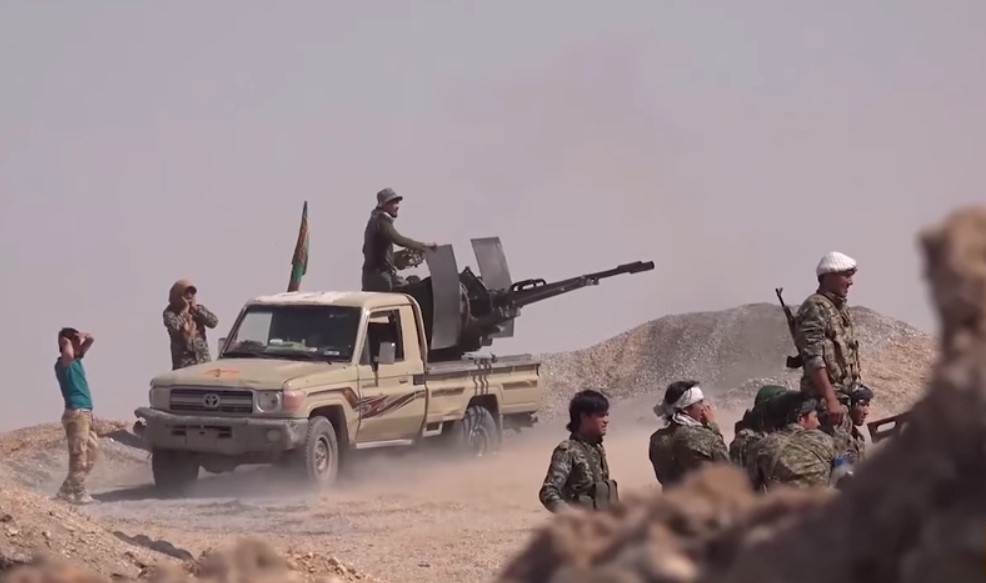 On May 31, the Syrian Arab Army (SAA) and the National Defense Forces (NDF) repelled a large-scale attack by ISIS cells on their positions in the area of al-Faydah in the southwestern Deir Ezzor countryside, according to the local Deir Ezzor News Network.

The pro-government network said that ISIS fighters captured several positions in al-Faydah in the course of the attack that lasted for more than six hours. However, the army managed to push the terrorists out of the area after killing and injuring many of them.

At least 4 Syrian service members were reportedly killed by the terrorist group’s fighters while defending their positions in al-Faydah.

A day earlier, the SAA foiled an attack by ISIS cells near the ancient city of Palmyra in the eastern Homs countryside and killed several terrorists.

Both attacks were apparently launched from the Homs desert, which lays between western Deir Ezzor and eastern Homs. Hundreds of highly-experienced, well-armed ISIS fighters are reportedly hiding there.

For fucks sake Syria, get off your fucking arse and end these fucking people once and for all. Is it really so fucking difficult?

I am surprised that SF has missed the important speech by Sayyed Nasrallah, in which he for the first stated that Hezbollah will destroy the Zionists and Saudis first if Iran is attacked.

The secretary general of Lebanon’s Hezbollah resistance movement has warned that a war against Iran would not stop at the Islamic Republic’s borders, and its flames will engulf the entire Middle East region and destroy US vassal Arab puppet regimes of the Persian Gulf and Saudi Arabia.

The rhetoric and threats of a war against Iran have ebbed because US President Donald “Trump, his administration, and his intelligence apparatus know well that any war on Iran will not remain confined to

Iran’s borders,” Sayyed Hassan Nasrallah said in a Friday televised speech broadcast live from Beirut watched by millions of people in the region.

For the first time, the Hezbollah leaders explicitly warned the US that Hezbollah sill not be a mere bystander if Iran is attacked. The first to be destroyed is Israel and the Saudis will be obliterated.

Yes, I hope to see the US leave the mideast entirely in my lifetime, and hopefully that will happen because they will be so terrified of the power of Iran and its allies that they would never want to come back

To he honest, Amercunts are dumb arseholes being used by the Zionist scum to destroy Arab and Muslim nations as clearly stated in the Yinon plan. Sooner than later, the puppet regimes like Saudis, Emiratis and other scum will fall. US itself is a global joke now with mass murder every day. An angry racist redneck in Virginia City just killed 13 other Americunts, just because he did not get a promotion LOL. America is hate-filled cesspool being destroyed by Jew parasites. It is on its last legs and even I may see its end before I move to outer space :)

hahaha yea I heard about it, where in space are you going?

I am thinking of peaceful existence on Mars before the Jews show up :). too many brainwashed stupid people on earth with “smart phones’!

ISIS trash going on a supply raid? Hopefully all they got was killed and wounded.

Read Hezbollah leaders very inspiring and as usual to the point speech today and he for the first gave an insight into Hezbollah’s strategic response if the Americunt idiots and Zionist parasites even think of attacking Iran, the first to disappear will be the Zionist criminals folloed by al-Saud cowards.

How’s that for a marvellous military coincidence. It’s almost as if ISIS and Turkey are in communication with each other!

So it’s a large scale attack yet there aren’t even a double digit number of deaths recorded? Is this the new way of click bait?

Most sides in Syria tend to hide the true number of dead and wounded suffered during engagements. The US and Coalition Forces can’t.

looks like revenge for recent attack on ISIS at Palmyra-Deir Ezzor highway.

Raed Alsaleh, chairman of the Syrian Civil Defense volunteer rescue group, (White Helmets) talks during a media conference in Istanbul, Friday, May 31, 2019. The group and an alliance of non-governmental organisations have gathered in Istanbul to call attention to an escalation of violence in Idlib province in northwestern Syria. Salah said a catastrophic humanitarian crisis is imminent and the Syrian NGO Alliance appealed to the United Nations Security Council to stop the escalation. (AP Photo/Lefteris Pitarakis) https://uploads.disquscdn.com/images/db1e90d3ed2bcf6bff494fb34b63b2dade23d869db58959028c80e5e345088e1.png

and Turkey is so called russias Partner in syria?????

having a White helmets Propaganda Show in ISTANBUL

Vollkrassmann
Reply to  klove and light

Right. Whenever any strange “NGO”-guys appear on microphones of top level “media” you can be sure that it IS propaganda for zionist purposes. Especially when the famous “White helmets” are there… In case of Syria: It’s about taking down the “brutal tyrannic regime of Assad”. Nothing new since 2013.:The “Western democratic forces” working for peace somewhere in Near East. Who’s still believing all that BS?

Off topic: Still no mention of Kurdish Cockroaches attacking Syrian oil transporters at Al-Shuhayl in Deir Ezzor. Treacherous Traitorous Kurds need to be put into the after-life permanently. AMN News

Needs a dedicated operation to finally clear these rats out.