The Syrian army has repelled another ISIS attack on the Panorama Army Base in the city of Deir Ezzor, killing and wounding up to some 12 ISIS terrorists.

ISIS units attacked the Panorama Army Base earlier today in an attempt to develop further their gains in the strategic Syrian city. Government troops, supported by Russian and Syrian airstrikes, repelled at least two offensive attempts by ISIS terrorists.

However, clashes are still ongoing in the area.

Meanwhile, army troops launched a counter-offensive in the areas of the Al-Maqabis Production and Cemetery, but also failed to make gains.

Pro-government sources report that up to 200 ISIS terroirsts have been killed or wounded in clashes for Deir Ezzor since the terrorist group launched an offensive there last week. 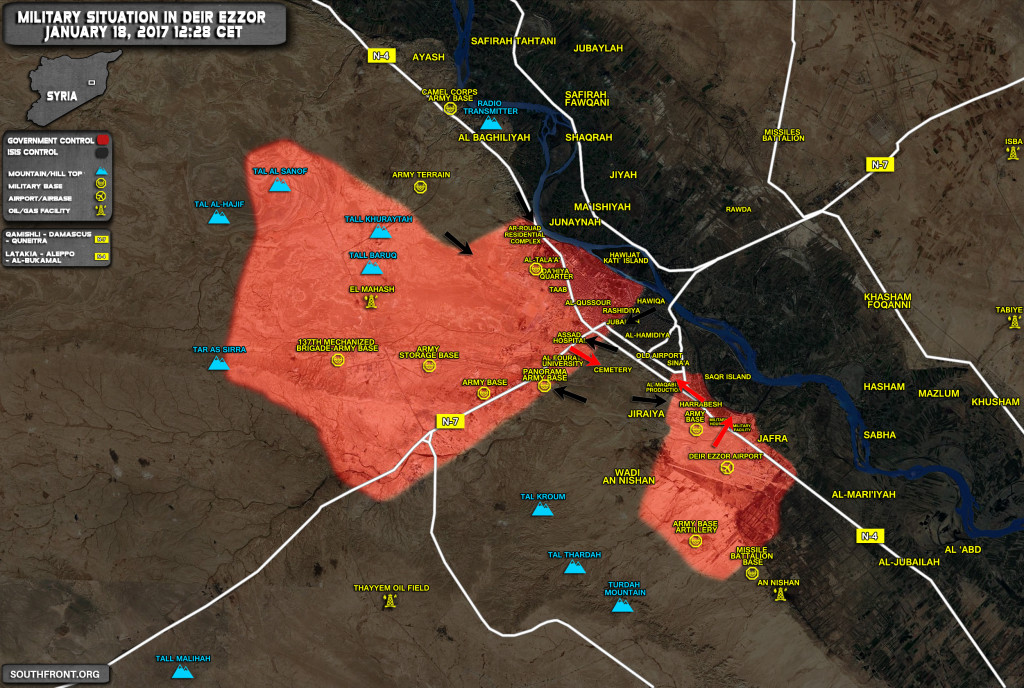 The cemetery needs to be retaken fast.

Yes, do not let ISUS fill up the cemetery with their dead. Let their bodies remain scattered across the desert, to be feasted upon by hungry wolves and buzzards.

Kind of desperate move, their bases are far away and they must travel across ISIS controlled territory; this is not like around Palmyra.

The only good thing about these two pockets is that ISIS troops in the middle are exposed from both directions, hope SAA has some decent artillery. Also, Russians should carpet bomb that area… btw is that bridge still intact?

ISIS have the last order of Obama and the last help for attack Assad, so it move on Deir Ezzor, Palmyra and in north Aleppo against SAA, but don’t move against Turkish arms and against the opposition to Al Bab