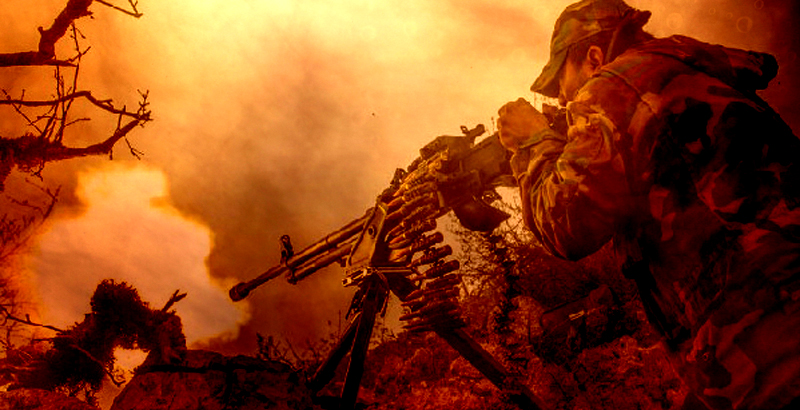 The Syrian Army has repulsed several attacks, launched by the Islamic State (IS) terrorist group on the southern and southwestern outskirts of Deir ez-Zor city, the Sana news agency reported, citing military sources. As a result, terrorists suffered heavy losses, and their military hardware was seriously damaged.

Reportedly, Syrian troops clashed with IS terrorists to the south of the 137th Brigade’s garrison, located to the southwest of Deir ez-Zor city. Three barricades of terrorists were destroyed, as well as a number of militants were killed and wounded.

At the same time, positions of IS terrorists, stationed in surrounding areas of the Deir ez-Zor airbase, al-Makbat region, al-Thardah mountain and Aloush hill, were shelled by army’s artillery units. Terrorists suffered heavy losses. In the course of repelling IS attacks on the Deir ez-Zor airbase, a tank, eight vehicles, equipped with large-caliber machine guns, and two bomb-laden cars were destroyed. In addition, at least 10 militants were killed on another sector of the area.

On Thursday, positions of IS terrorists, deployed in the area of the al-Maqaber cemetery, as well as of the Talat al-Rawad and al-Mayadeen roads, located near the city of Deir ez-Zor, were struck by the Syrian Air Force and government troops. As a result, several terrorists’ bases and oil tankers were destroyed, as well as a number of militants were killed.

In addition, Syrian troops also launched a fresh operation against IS terrorists in the southern part of the 137th Brigade’s area, located in southwestern Deir ez-Zor. As a result, three machineguns of terrorists were destroyed, while a number of militants were killed and wounded.

5000 iraki troops are on the way to Deirzzor to f*ck all those salvo-wahabi terrorist.

Well they said they will come when ISIS is out of Iraq, but this could still take months.

Source please, It is known that PMU may head to the border and seal it but not just yet.

SAA having tough time in Deir ezzor. But I believe SAA will fight it out eventually under able leaders like Issam zehreddin. I suggest they should follow more of the trench fighting till reinforcements arrive and be aware of the ISIS drones.

Pure sex!!! Russia needs to keep doing as many airstrikes as it can on the bigger juicier daesh targets to make life as easy as possible for SAA on the ground!!

If one is realistic, SAA is losing this battle. It is besieged, I hear all the time of SAA successes there, the frontline hardly moves however. They may get ammo and food, but they cannot replace hardware. They are slowly being degraded till the point of collapse.

The civilians however are already collapsing. They are being starved.

How long can they go on?

Hopefully ISUS is being bled out at Deir Ezzor. I read that base 137 has heavy equipment in storage. Not sure how much tonnage of food is being airdropped. Would like to see the airfield re connected ASAP.

ISIS is considered to be the loser since it hasn’t been able to take the entire city after all these years. I’m sure that the civilians and soldiers have been tending large gardens and livestock where ever possible to feed themselves.

both side can’t hold ground that’s why de front line never changed in past 3 weeks, attacking is one thing but to hold your newly acquired territory is wat get you killed in war you got to fortify en dig in deep. The SAA knows and lets ISIS fails in the trap, for ISIS Deir Ezzor has become a meat grinder Before the war Deir Ezzor was to be a future tank base ”119 Tank Brigade” the never got finished, i read somewhere the got tanks in storage and a lot of heavy weapons but none to operate them.

Weeks and months. Ammunition and food came regularly to Deir Ezzor. Non-replaced hardware is a problem sure. And we have to expect that fled ISIS fighters from anywhere will be commanded to fight there. It needs to pound the ISIS by day and night by the aircrafts. And it needs to rain down more and more food and supply for the civilians to get them staying with SAA. Deir Ezzor will the most important and strategic government in the east to free the south east at the Jordan border (no big duty) and to keep contact to the euphrate line in direction to Raqqa at the western part of the river.