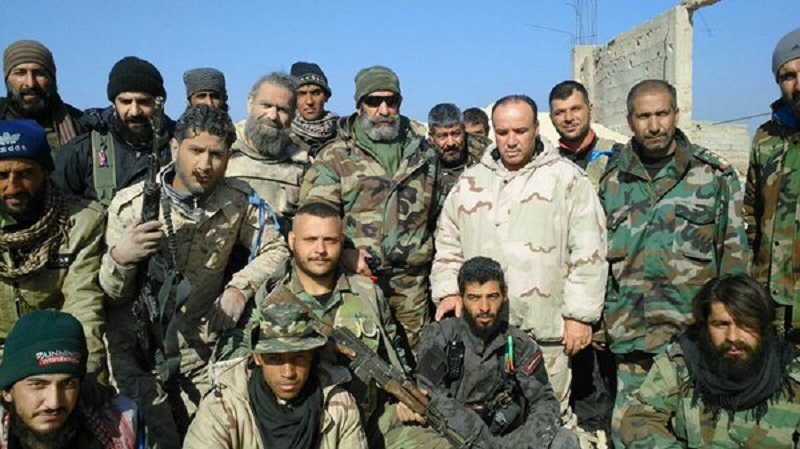 The Syrian Arab Army (SAA) repelled an attack by ISIS terrorists on the Deir Ezzor airport from the southern direction and the direction of Lwa’ al-Ta’meen. Republican Guard fighters reportedly killed and wounded a large number of attackers.

SAA artillery units targeted ISIS terrorists in the vicinity of the airport, Al-Makabr area and the village of al-Marayaa.

The SAA launched a limited attack on ISIS points in the Al-Hweika district in Deir Ezzor and Al-Mayadeen town in the Deir Ezzor countryside.

The Syrian Air Force bombed ISIS positions in Al-Hweika, Rashidiya and Rusafa districts in the city of Deir Ezzor and in the Al-Thardah mountain south of the city.

The US-led coalition’s warplanes also targeted ISIS oil wells and tankers in the town of Khasham east of Deir Ezzor.

Menawhile, ISIS targeted civilian and military targets with mortars in Harabesh district in Deir Ezzor. According to opposition sources, the organization arrested a number of civilians attempting to escape from the ISIS-held area of the city.

ISIS also transferred a large number of prisoners from Raqqa to the city of Al-Mayadeen in the Deir Ezzor countryside.

According to local sources, the US-led coalition carried out another landing operation in the Umm al-Salaba area in the desert of Al-Bokamal. The US Spicial Forces captured 12 ISIS fighters during the landing, according to reports. [unconfirmed]

It’s really amazing how the SAA soldiers are staying strong in Dier Ezzor even after all the ISIS reinforcements coming from Iraq.

It’s also amazing how many secret “Coalition” ( = US) ‘operations’ are being carried out behind ISIS lines. Is this really to rescue “spies” or provide ISIS with high-tech (e.g. infra-red binoculars)?

LOL! Daesh can buy those binoculars on Amazon, just like their drones. The US probably swooped down to retrieve spies and their informants who managed to get out in the desert as a group.

OK, it was just an example. What about ultra-violet?

Correction – Daesh doesn’t buy items off Amazon – their Saudi Arabian sponsors do it for them via Saudi Arabia.

Well the entire ISIS is a CIA operation, so my guess is both and put more secret special agents in the ISIS army.

US Special Forces helicopters have been repeatedly observed landing in ISIS controlled Dier Ezzore Province since late 2016. For the besieged SAA garrison at the Province’s namesake town – whose defenses were bombed by USAF in late 2016 one thing is clear, the SAA cannot trust the US’ activities in province one iota.

It’s really amazing how ISIS has been too inept at planning a large scale offensive to take the city and amass the forces to do after all these years. Assad still needs to send in plenty of reinforcements and supplies just in case the city gets swarmed by ISIS fighters trying to escape to the south.

I have even wondered if they besiege the city in order for Assad to keep on sending troops, ammo and bombers to the city, thereby keeping part of his forces occupied.

If correct, they might change their stance as they (IS) are now getting defeated elsewhere and they need the city under their control.

The name of the game is simple: “Fight fo your lives!” What do you think the ISIS is going to do for SAA soldiers? Treat them as prisoners of war? C’mon kids.

On DEBKA File its headline says –

ISIS Opens Its Next Front in Sinai and Gulf of Aqaba

There have been reports of large operations by Egyptian security forces in the desert, in some cases, wiping out as many as 20 militants at a time. Large, well equipped formations of jihadists hiding in egypt.