An attack of the Jabhat Fateh al-Sham (previously known as the Al-Nusra Front) terrorist group has been repelled by the Syrian Army, backed up by the Russian Aerospace Forces, in the Al-Shqaif district of Aleppo. 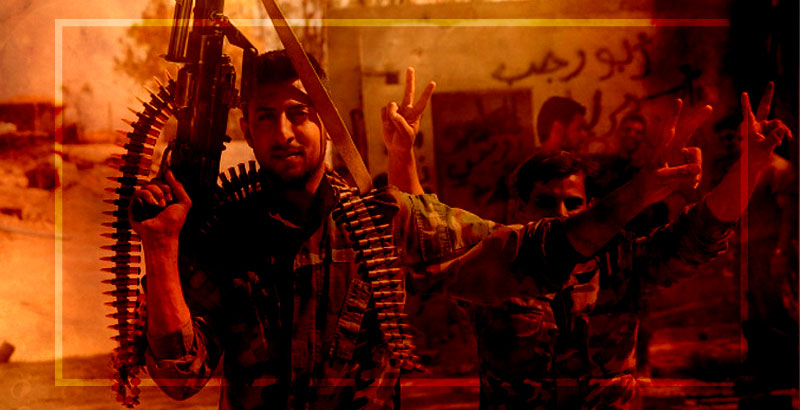 The Syrian Army, backed up by the Russian Aerospace Forces, has repelled an attack of the Jabhat Fateh al-Sham (previously known as the Jabhat al-Nusra or the Al-Nusra Front) terrorist group in the Al-Shqaif district of Aleppo, the Russian centre for reconciliation of opposing sides in the Syria reported on Tuesday.

“As a result of heavy fighting, Syrian government forces backed by the Russian Aerospace Forces repelled a terrorist attack in the Al-Shqaif district on the northern outskirts and regained control of the southern outskirts of Al-Shqaif on the morning of September 20,” the center’s statement read.

According to the center, four infantry fighting vehicles, seven pickups with heavy machine guns and up to 40 militants were destroyed by the Syrian Army during the clashes with terrorists.

Earlier on Tuesday, the Russian centre reported that terrorists of the Jabhat Fateh al-Sham group took control of a part of the Castello Highway in the area of Aleppo.

According to available information, about 5 am, after the shelling, Jabhat Fateh al-Sham terrorists from the Muhaim Handrat inhabited locality in northern Aleppo launched an attack in the direction of the Sheikh Maqsood neighborhood. During the offensive in Aleppo, terrorists took temporary control of 1 km part of the highway, the RIA Novosti news agency reported, citing the center’s report.

As a result of the fierce clashes, terrorists pushed government troops and Syrian people’s militia units from the southern outskirts of the Al-Shqaif district.

On Monday, a massive assault, targeting parts of the Al-Ramouseh and the 1070 Al-Hamdaniyah Housing Projects at the southern districts of Aleppo, controlled by the Syrian Army, was launched by the Jaysh Al-Fateh group.

The assault was begun shortly before an expiry of the nationwide ceasefire. The Jaysh Al-Fateh fired positions of the Syrian Army at the 1070 Housing Project with mortar shells and rockets.

After this, the Jaysh Al-Fateh stormed several sites in southern Aleppo, including the Aqrab-Rashidden axis, where the group attempted to breach the Syrian Army’s defenses that resulted in a series of intense clashes, which lasted for most of the day on Monday.

However, terrorists could not capture any significant points of the Syrian Army and suffered heavy losses.

Also, on Monday evening, a humanitarian convoy of the UN and the Red Crescent came under an air attack on the Castello Highway. As a result of the attack, at least 18 vehicles were destroyed, and 12 people were killed.

Syria army forces need to demonstrate valiant and not to let terrorists to have to reverse what Syria army gained last two week ago. This repellent will make terrorists think twice to attack Syria army position again.