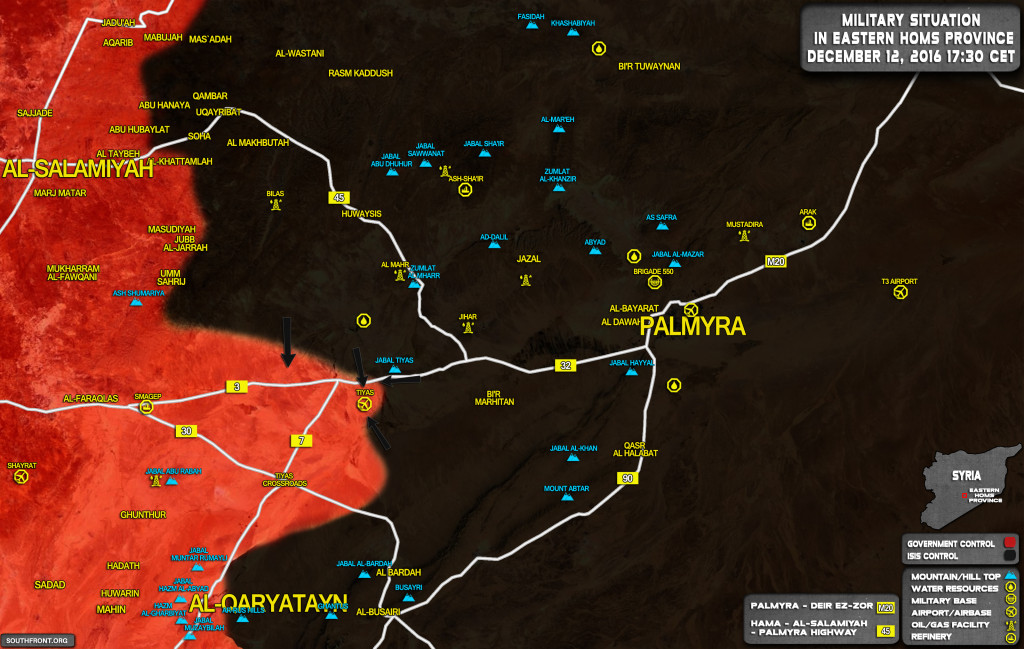 The Syrian army and the National Defense Forces (NDF) have repelled the ISIS attack on the strategic Tyas Airbase west of the ancient city of Palmyra.

Now, the Tyas Airbase is a key defence locality of the Syrian army that it will use to repell ISIS attempts to develop the advance.

In turn, the goal of Syrian government forces is to regroup, to deploy reinforcements and to prepare an operation to retake the ancient city from the terrorist group.

Syrian troops are repelling the ISIS attack on the Tyas Airbase: 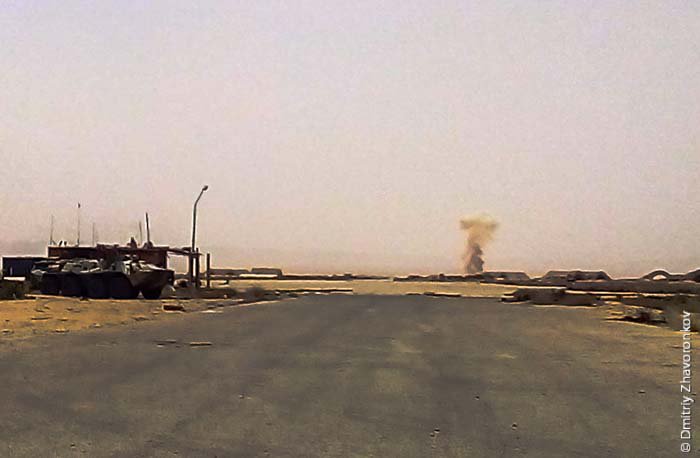 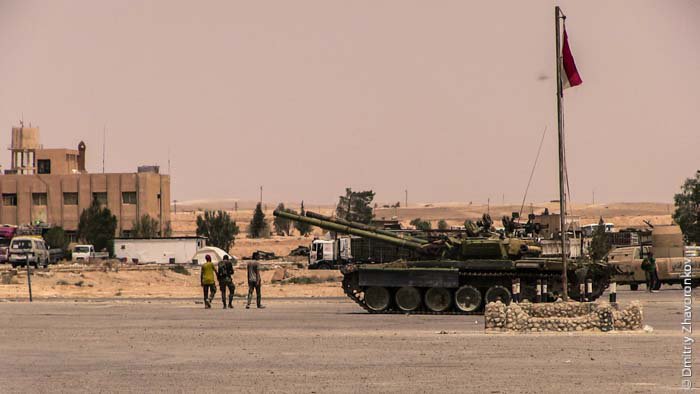 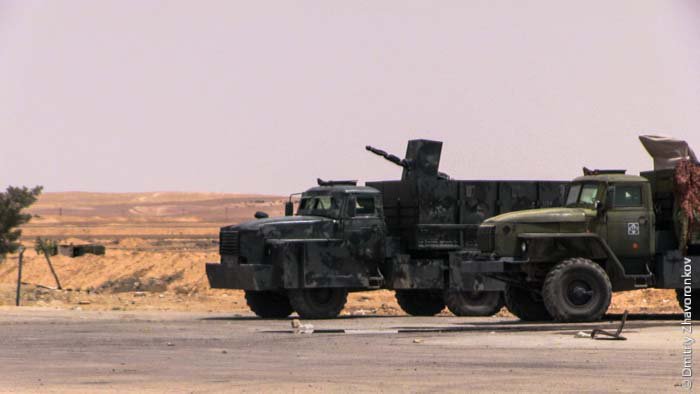 Syrian troops near the Tyas Airbase: 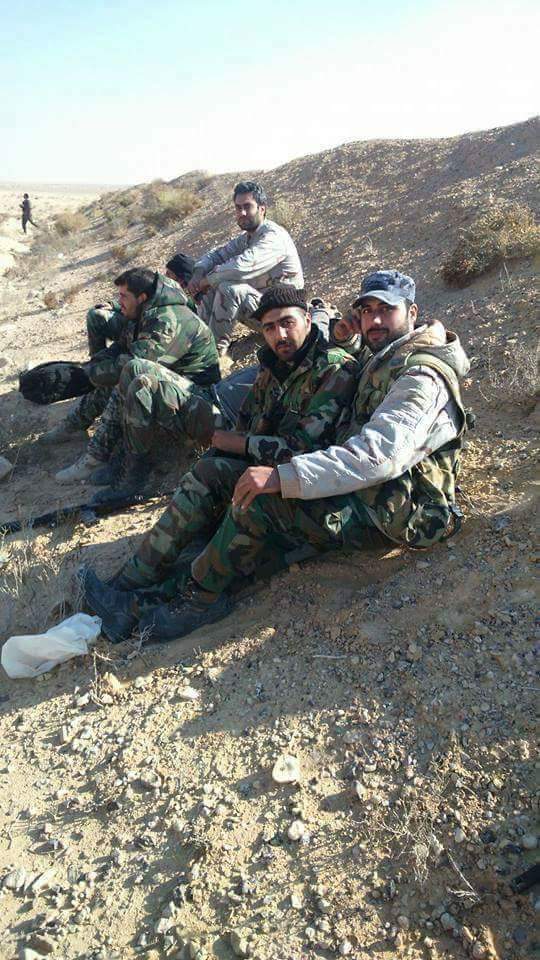 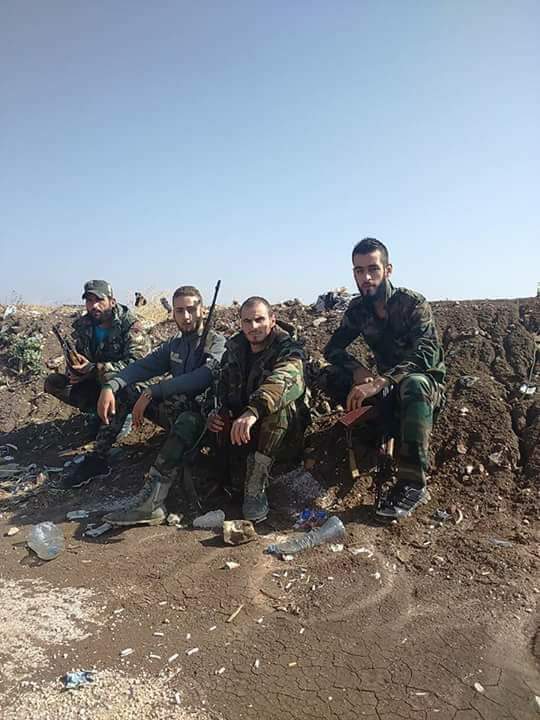 The moral is down. This is what the images tells me

Seriously? This is serious for the SAA… The moral is going down

You have good days and bad days. They are doing a seriously good job in Aleppo and having a lot more success than they did 18 months ago. There again, media disinformation agents, are no doubt out in force, to demoralise the Forces.

Amazing what just 4000 can do to the SAA. Hell, ISIS only has, what, 15000 men in Syria? You’d think that the SAA could quickly muster at least a few thousand troops in the 3/4 days that this attack has taken place over. Look at the sheer distance they’ve fled from, looks like they ran with their tails between their legs offering little to no resistance. Gutless.

You dont know what was behind the table of Rus- Us negotiations last week. There is something strange going on indeed. Maybe there was some kind of deal between them; Usa prox. leaving Aleppo to SAA in exchange for Palmyra gas fields or something…Strange thing is they left the place in such a hurry and they HAD know somehow that such a large force is moving toward Palmyra few days ago – at least Russians must have known this. Surly there were and are Drones flying all over the desert. Anyways if you check RT for news about Palmyra – there is no article about Palmyra falling to ISIS and we know that this has accured yesterday.

then kick out russian traitors. putin is bandit!

Stick a sock in it, Ukropi eejit….

ISIS can recruit a LOT more than 15000 warm bodies if their cities are under attack. By propaganda, by force, with money …

Recruiting fighters for offensives away from their towns, like this Palmyra offensive, is more difficult.

Judging from how those who were under ISIS in Allepo were treated, I don’t think many will fight for them in Rakka or Deir Ez Or. If forced they will pick up a gun yes but likely surrender or desert at the first opportunity or maybe turn on ISIS.

I disagree because the eastern part of Syria are the core ISIS territories, full of poor disenfranchised sunnis. And ISIS is dominant there, unlike the hodgepodge of militias elsewhere, who are sometimes fighting each other.

East Allepo was also mostly poor Sunnis who moved to Alleppo from the rural areas of Syria like Rakka etc. Unlike in Iraq, Sunnis have not been oppressed in Syria as they were in Iraq under USSA occupation and by USSA /Israeli puppet governments in Bagdad.

Also don’t forget Assad’s wife is a Sunni and over 70% of the Syrian army is Sunni as well! the Iraqi army is Shia and Kurd.

I believe there is a difference between sunnis in eastern syria and in western. There are a lot more tribalist radical sandal wearers in the east, far away from “useful Syria”.

Alexander Prokhorenko did not died for this to happen :(

Unwittingly the Russians end up arming ISIS just as their western sponsors are continually doing. What an irony.

Instead of counterattacking to retake Palmyra, better strengthen and shield their lines of defense on the strategic Tyas Airbas and its surroundings. Because if they neglected one for the other they would end up losing both, adding verger about shame both over the Syrian government and over their great allied Russia.

No, as the civilised world cannot allow the IS troglodytes to destroy the cultural heritage of Palmyra. The city is an archeological treasure, and must be liberated before these filthy wahabbi rock-apes can vandalise any more.

What im wondering is how many adult males are there left in Syria and Iraq? Problem comes when there simply arnt enough people. Maybe things arn’t that bad yet, but I get the feeling that many people just fled. In many civil wars mustering up an army to fight for an unpopular government is difficult. Thats where mercenaries come in. In Bosnia something like 80-90% of the army just didn’t show up for duty, much of the spearhead on either side was private armies.

2 regiments are required for a swift attack on north an south flanks from Al Salamyah and south of Al-Quaryataryn. Then attack with strong forces trhough Palmyra if ISIS answer on flanks.

infantry or armored regiments? with or without artillery/air support? I think all the expensive kit is in Aleppo.

ISIS probably don’t have any more main battle tanks left after having lost 30 of them in the new offensive for Palmyra.

Honestly, I do not understand some of the responses… The loyalist forces did a very good job. Well done!

This airbase may be strategically more important than the whole of Palmyra. Thus, it was sensible to abandon Palmyra for the sake of holding the airbase. To hell with holding Palmyra at all costs! Conquering it was probably foolish in the first place. It was indefensible. The Islamic state launched attacks from 3 sides! The defences were overstretched, thus it was better to retreat rather than lose precious weaponry and even more precious lives. The attitude to waging war must now be medieval—like in the Middle Ages: cunning manoeuvres and conservation of resources.

Furthermore, since it did not fall to “moderate terrorists”, there will be no international pressure against retaking it.

I think Russia knew ISIS was going to attack Palmaria all along. It’s a good trap. Russia probably thought that Syrian troops could at least hold out for a few days which they did not. Russia / Syria needed to keep second rate troops there to bate Israel / ISIS and Saudi into an attack and they fell for it. The ISIS move is too little too late. It does not matter. Aleppo has been won.This Palmaria move was a stupid desperate attack to relieve pressure on Aleppo and has turned into a huge strategic mistake by Israel / ISIS and Saudi. Now this large ISIS force can be wiped out by Russian / Syrian air power and the Tiger forces. Their supply lines are long, with no Israeli or Turkish hospitals nearby, all the ISIS wounded will die. They are in the open with no tunnels to hide in. I bet less ten 10% of the ISIS solders in this attack make it back to ISIS territory alive

That is what I am hoping. A nice little trap. 4,000, heavily weaponed goons of ISIS, sitting happily in Palmyra, like ducks, How easy would that be, to take them out?

There are no civilians there in Palmyra now unlike the last time, to be used as human shields so I bet they will be blasted by air power and heavy artillery. They are not just in Palmyra they are in they whole area exposed to air power, with long supply lines and no Israeli or Turkish hospitals nearby for their wounded.

Wouldn’t that be nice? Now that they have Aleppo sorted and to stop the others moving into position, that could cause problems later. It would be worth it just to see Kerry, Biden, McCain, Graham and Nuland melt.

Is it possible to realize that the lost of Palmyra overshadow the victory in Allepo ? There was a military error here from russian and syrian, independently of which city is more important ! This is just not acceptable !!

how about lay seige to palmyra and starve them out