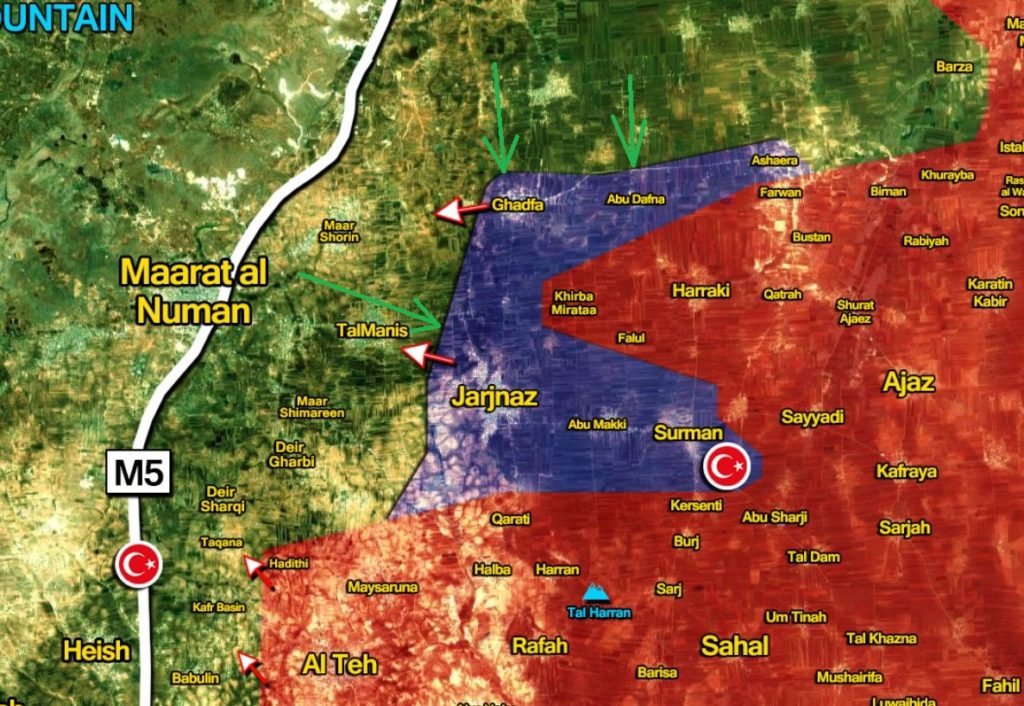 Government forces have repelled a counter-attack by Hayat Tahrir al-Shan and its Turkish-backed allies on the town of Jarjnaz in southern Idlib and have resumed their advance on the town of Maarat al-Numan.

The militant counter-attack started on December 24 evening with at least two suicide bombing attacks on positions of the Syrian Army. Despite this, the terrorists were not able to break the Syrian Army defense line.

Pro-militant sources claim that they destroyed at least 5 units of military equipment belonging to the army and killed over 12 soldiers. Even if these reports are confirmed, strategically the situation for the radicals remains bad. Maarat al-Numan is on the brink of being liberated by government forces.

Not long now. The whole jihadi ruse is falling to pieces. The headchoppers are making excuses for their failure. Not a good sign. Perhaps Allah isn’t with them after all. The Syrian people will have a new start to a new year and they will be forever wiser to the tricks of the US/nato/isreal.

Thought for Xmass Day: It is awful to read about Jihadi suicide bombers particularly when they explode on a new forward offensive line of the SAA and its allies. I’m sure the SAA and their Allies have considered this problem at length. I have observed a couple of videos where advanced SAA units had to rely on one or two of their Chad war chariots to take out the incoming Jihadi bomber traveling at 100K or more in an armored-plated vehicle. On both of the vids I watched it was a combination of a heavy machine gun and something like a 30mm cannon. The would-be suicider got to within half a K or less before been taken out. Wonder if they should also employ suicide drones launched from the back of one of those Chad Chariots. My thoughts as always are with those indomitable SAA warriors who fought and smashed their way through those rabid satanic monsters only to be murdered by a brainless moron, who’s sole purpose was to murder good men.

yep the liberation of idlib is well under way and after that the pacifying of the kurds in the northeast and the expulsion of the unhinged states of A and their mercenaries and the war will be over, Putin can claim a victory over the delusional unhinged states of A that will have to report back of another defeat of which there are quite a few by now. the americans are just not bright enough for any kind of warfare/regimechange or assassinations when the world is watching. and meanwhile the american taxpayers are screwed again and again and are the real losers.

The liberation of Idlib is stalling again, it’s not well under way, Putin’s pulled the plug again and bowed to Erdogan’s demands for the 15th time. I keep accusing you of being a paid for troll and your latest comment just reaffirms my belief, how the hell is Putin helping the SAA in Idlib, there hasn’t been any Russian air support for the last 2 days. Only the SAAF and SAA are attacking the rebels now, your hero Putin’s having a break because he must’ve decided to celebrate Orthodox Christmas in December instead of January.

blah blah the ineptitude of your thinking is striking and can’t be more wrong.

Where are the Russians, why aren’t they helping the SAA and SAAF, can’t they see the assault is stalling, why aren’t they doing what the Syrian central command said they wanted to do on the 20th of this month, which is continue operations until all the terrorists are eliminated. But that’s not what’s happening now you moronic troll, the Turks have stalled the fighting again, or more accurately, Putin’s stalled the fighting again, so go and stick you geopolitical reasons up your own you know what, because that’s the way unloyal LGBTQI wankers think, not honest men, your opinion is worthless.

These HTS/AaS faggots must be having a great time, given they are getting their well-worn arseholes reamed daily by the SAA and the Ruskies :-D

Hasn’t anyone been paying attention, NO RUSSIAN AIRSTRIKES FOR 2 DAYS, guess what that means, the SAA and SAAF are going solo. Putin’s capitulated to Erdogan’s demands for a new ceasefire, that’s what the loss of Russian aviation means, which also means the liberation of Idlib is about to stall again due to a lack of Russian assistance. Why is it I’m the only one to comment on the lack of Russian support for the last 2 days, surely most of us are aware of the fact, and yet I’m the only one to mention it for 2 days running, doesn’t anyone care that the Russians have stopped assisting the SAA and SAAF, I DO. You traitorous piece of shit Putin, you’re just a whore when it comes to loyalty. And if you’re thinking the Russians are having a Christmas break they aren’t, Russian Orthodox Christians celebrate Christmas on the 7th of January. Miserable Christmas present Putin, you can take it back to the store.