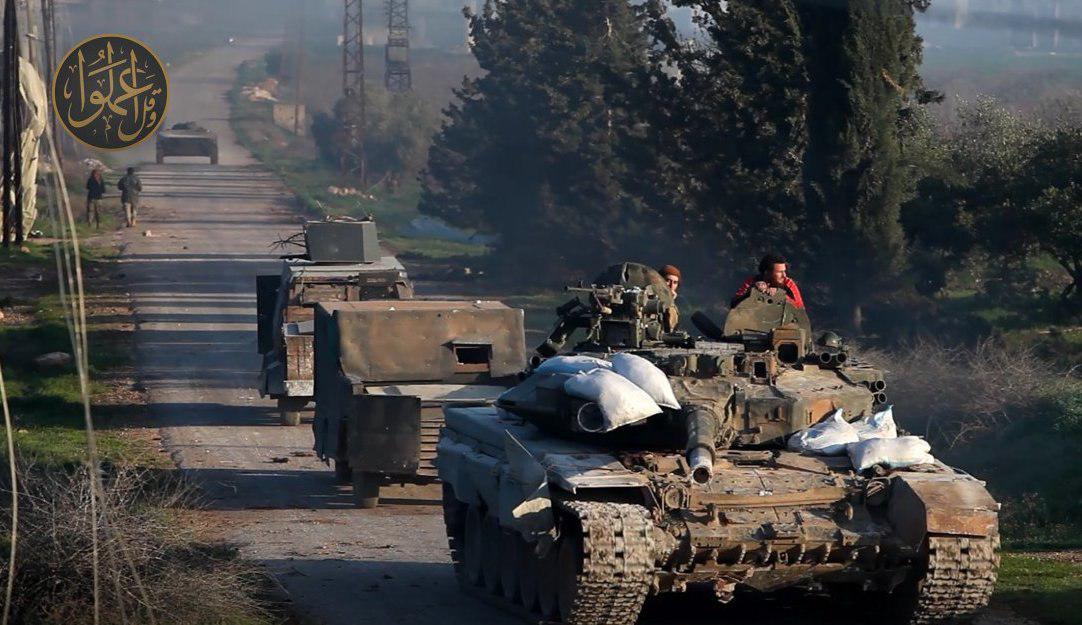 On March 24, the Syrian Army repelled two major assaults launched by Hayat Tahrir al-Sham (HTS) and its allies in the northern countryside of Hama.

The first militant assault targeted Kawkab village which was recaptured by the government troops yesterday evening. Militants even were able to enter the village and declared the control over it in their media outlets. However, they were pushed to retreat. 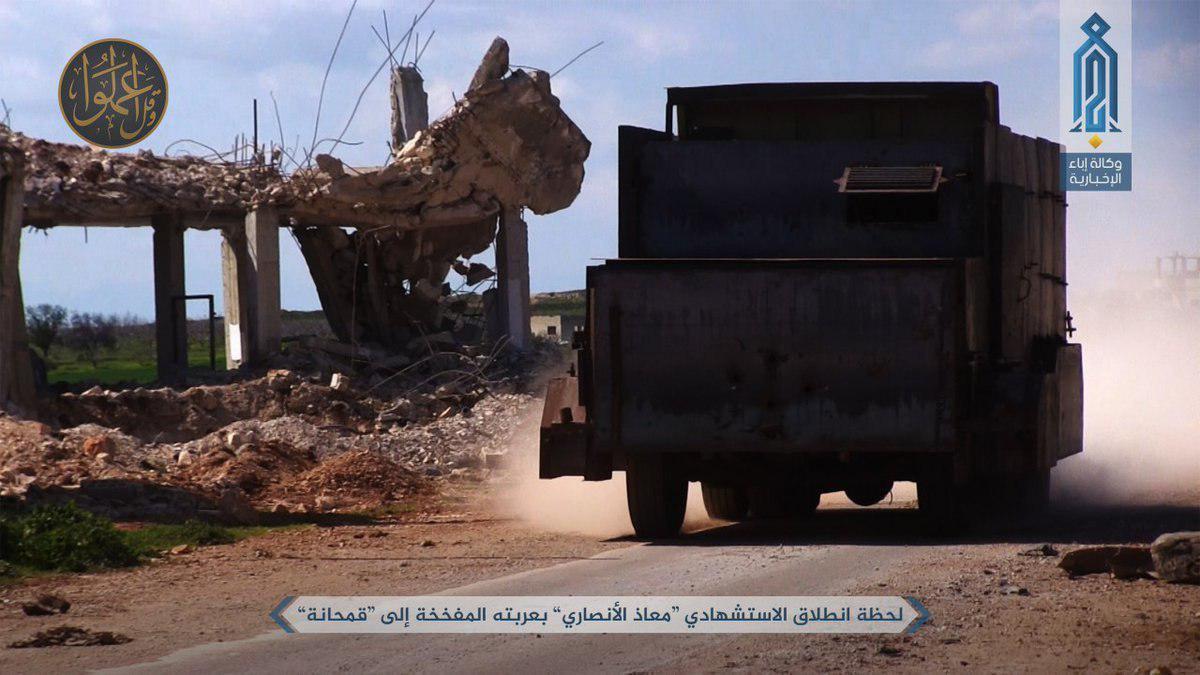 As for the second assault which was more powerful, the target was the loyalist stronghold of Qamhana. The al-Qaeda-affiliated HTS used an armored VBIED in an attempt to etenr the town. A T-90, captured by the terrorist group last June during a battle for the Mallah area in northern Aleppo, was spotted at the battle scene. But, local units of the Tiger Forces managed to repel the assault.

Many reports suggested that the jihadist forces’ casualties were extremely high in the past 3 days of fighting. A high-ranking HTS military commander in Nizar Lattuf, nicknamed Abu Ahd, was killed during the failed attack today morning. 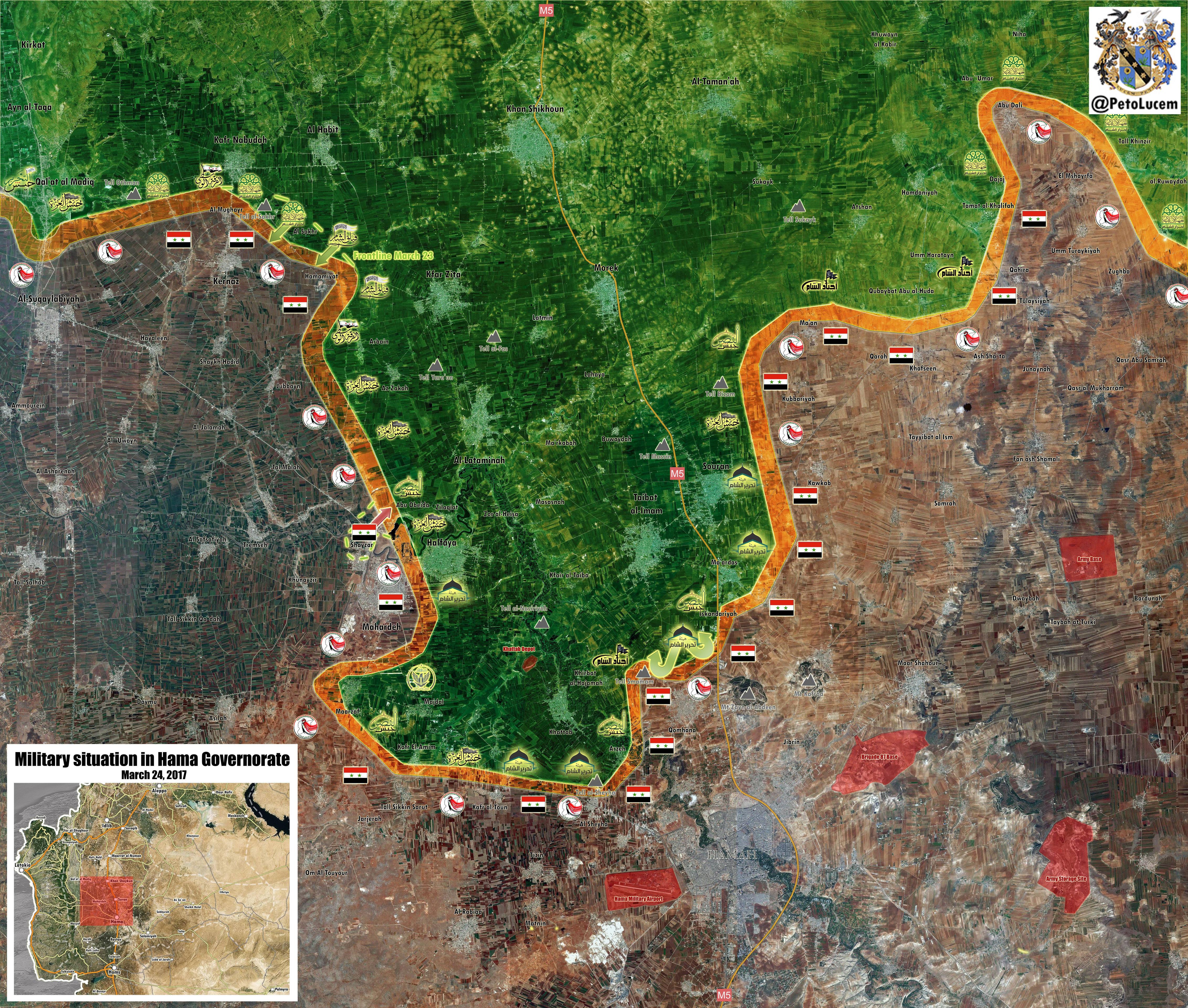 Opposition sources revealed that the residents of Kafar Nabbudah barred HTS from using the town as a foothold for further attacks and a logistical hub for the nearby battlefields. However, the extremist group gave the locals a deadline to open the roads before they do this by force.

Northern Hama is becoming another meat grinder for mindless jihadis. It is not much different than SW Aleppo of last year where 11,000 jihadis started a spectacular attack only to get bogged down and get decimated in a systematic manner, suffering 40-50% casualties. Northern Hama will be a replay of SW Aleppo.

Haha hopefully they’re all vaporized including the leaders of HTS

While we are happy to see the jihadists being turned into dust , I fear it is a “big distraction” , activated in order for the US (Kurds) to slide into Deir Azzor , cutting the Shia Cresent .

I see the Kurds staying east of Eufrates, their incursion near Tabqa is meant to cut off one sure avenue of ISIS withdrawal. Americans will not involve great numbers of their troops, their current goal is to take Racqa, if the siege of Racqa takes as long as the siege of Mosul, SAA would be in position to challenge the Kurds and the Americans. Currently they have the foundation of two pincers approaching eastern Syria, which could be developed to exploit the ISIS weakness in the area.

Send colonel Hassan to Hama.He will bitchslap HTS within 2 weeks.

He IS already in Hama…

I had no idea.Good times,

All the moderate and radical groups cannot be trusted, since they are easily instigated, time has come to eradicate these groups for good. Putin has to reconsider his relationship with Erdo, and consider Turkey more of an enemy than an ally, he has tried to reconcile the moderates and engage them in a political process. You cannot cuddle and keep a snake in your bosom, cut its head off and be done with the aggravation. The jihadis have no chance of winning anything, they are a blemish that needs to be eradicated and have Syria free of these parasites. If Israel and Turkey have issues with such an agenda, they need a kick in their butt and removed from relevance in the area. Putin needs to revive the old KGB mentality of dealing with jihadis.

Well all those Euphrates shield forces mercenaries had something to do or fight otherwise they become relentless. When SAA blocked them south of Al-Bab and then west of Manbij they had nowhere else to go so TAF bused them back to Shitlib. Maybe Turkey just wanted to get rid of them since they are no longer needed and just sucking on a payroll…

All Turkomans will be reunited with their beloved Abu Ahed and then can enjoy all the Baklava in the afterword. And 40 goats each. The Dream Love Life for every Jihadist :D:D:D:

What we are witnessing is the local version of the Battle of the Bulge: a last desperate attempt by a defeated force to stop the advancing armies. They throw everything they have left in the battle, and they will be left with nothing to fight with. The war is on the way to its natural end. Kicking the Turks and the Americans out of Syria may take a bit longer.

I beg to disagree. The human supply to the Sunni terrorist is endless . There are literary hundred of thousandths of brainwashed, brainless goat fuckers all over the world that are waiting to commit jihad in the name of Allah. Likewise, Israel,Turkey as well as Gulf states remain deeply committed to preventing Iran get a strong foothold in Syria. This war will not end, until the end of times and Damascus will be destroyed in before the end times, as prophecies in the bible. Especially Israel will not let the Russian-Iran-Hezbolah coalition succeed.

The US has told turkey in Ankara that Assad’s future is for the Syrians to decide So that implies the yanks are interested only in securing a Kurdish state in N. Syria so they have told turkey to fuck off No the Kurds have two choices an autonomy within the Syrian state, which can guarantee by writing such an agreement into law They will remain apart of the Syrian Army, I’d imagine Arab will be dropped to accommodate the many religions sects with the greater syria Or they can go with the US who will use them in Raqqa, set up a military base and leave the Kurds to the mercy of the rigours of international law and new states