The Syrian army and other pro-government factions have regained control of the town of Kawkab from Hayat Tahrir al-Sham (formerly Jabhat al-Nusra, the Syrian branch of al-Qaeda) and its allies in the northern countryside of Hama, the Syrian state-run news agency SANA reported, citing a military source.

The same reports appeared in pro-militant sources, including the so-called Syrian Observatory for Human Rights.

The town of Kawkab was seized by Hayat Tahrir al-Sham-led forces earlier this week after militants launched their large-scale advance in the area.

The liberation of this town indicates that the joint militant forces are losing momentum in northern Hama and government forces have chances to regain the initiative in this battle. 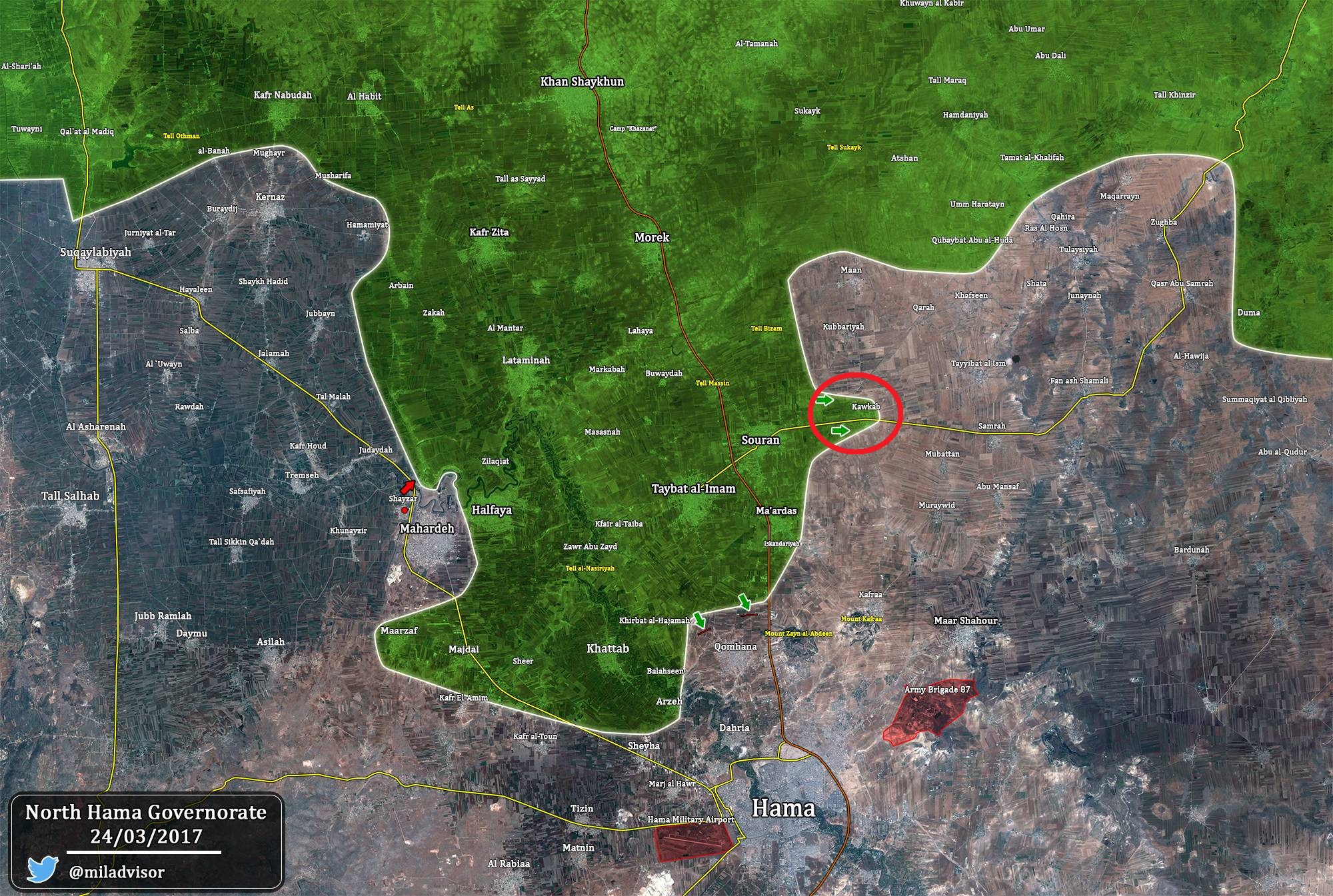 good !. TF was there that means the battle will become disastrous for IS

Ok, good bloodbath for rebels, if they don’t seize Hama is a tattical victory. TF must will be sent against turks now -_- Or not: who of the two have more manpower? against he: the other is a diversive

Advance on Kafr Zita and Morek, if they think to be encircled they maibe will leave the area. With ISIS in Deir Ezzor this plan have run

USA and Israel have defeated Russia, Syria, Iran, Turkey, China, ISIS, Al-Qaeda, HAMAS, and everyone else in Syria and Iraq.

And your Mom? They haven’t defeated your mom? :D

Whoa, that was such a good joke! You got me there!

11. And you made me laugh. I hope you will continue to write in this site :D We have just a nazi turk (solomon), now we have also an…male american white republican protestant? :D Show me your desperation while you try to say USA have won this war like they have won Vietnam and Afganistan :D Iraq is now only a Iranian puppet (thanks to USA) and USA (because their “moderate rebels” have clearly lost the war) are forced to support their worst and most hated “allied”: the curds (who have no minimal intention to fight against syrians and russians :D) only to save their faces :D Thanks to this war (you have started) Russia have gained 2 naval base, and in last years Russia (and Iran) have gained Egypt (first your allied), Syria and Libya (your jhiadist government control nothing if you watch the map) as allied. Also in Yemen your position is all but not good. Turks are Russian enemies but now they are “de facto” also YOURS enemies. In few yaers you have made nothing but to lost any real influence in all the middle-east. And if you speak me of the Russian Economy: you have no readed the real data on russian economy :D Russian economy is ever in growth, the state have no shortage of funds, public debit is 15% (USA 100% :D) and Russia is a great creditor state :D And yes: don’t think that to commerce with USA or EU is vital for Russian because is it for nothing :D (for russians in the really to commerce is not needed at all :D) And USA position in south east asia now is great, really :D You do nothing against China aggressions and risk to be kick-offed by Philippines :D And someone have said Crimea? :D But not despair: you have ever Hollywood, and in your own film you will win ever like you have ever made :D Now: try to say me you have won this war another time: it’s funny :D And another time: i hope you will continue to read this site and write you beatiful american opionion :D You made laugh :D