The Syrian Army has repelled an attack of the Islamic State terrorist group on its positions at the T-4 airbase. 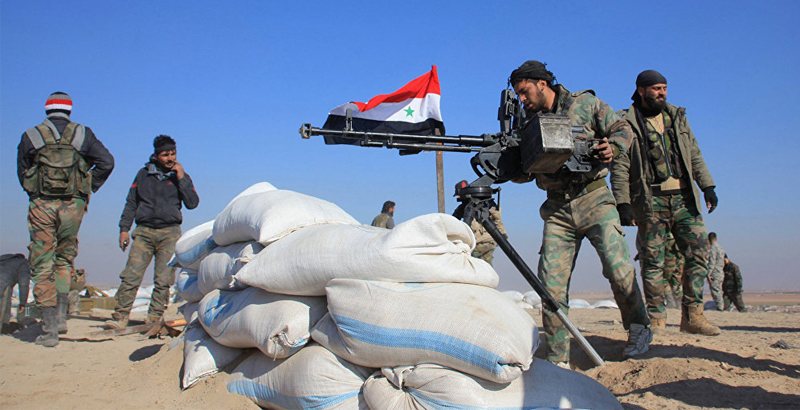 Terrorists of the Islamic State (IS) group launched an attack on positions of Syrian troops, deployed at the T-4 military airport, located in the eastern part of Homs, however, the Syrian Army managed to repel the offensive.

Meanwhile, the Russian Aerospace Forces carried out a series of airstrikes on positions of IS terrorists, stationed near the T-4 airbase. A number of terrorists were killed and two their military vehicles were destroyed.

The Syrian ground forces and the country’s air forces launched several attacks on bases and gatherings of the IS and Jabhat Fateh al-Sham (previously known as the al-Nusra Front) in various parts of Homs province. As a result, terrorists suffered heavy losses.

Syrian troops laid an ambush for a group of IS terrorists, who were going to attack positions of the government forces, deployed in al-Brij, from al-Qalamoun. The terrorists’ plan disrupted, while a number of IS members were killed and wounded.

At the same time, terrorists’ gatherings in al-Farhaniyeh village, located in the northern part of Homs, were hit by Syrian fighter jets. The Syrian Air Force also carried out several aerial attacks on positions of Jabhat Fateh al-Sham and other terrorist groups, stationed in Um Sharshouh and Sneisel regions, as well as on farms, located near Talbiseh town in northern Homs.

The headline should be “Syrian Army DEFLECTS” or “REPELS” or “REPULSES OFFENSIVE”, not “REFLECTS”. South Front just cannot seem to get its English right!